BETTER infrastructure and more functional townships. These are the top two on the list of what Kuala Lumpur folks are looking for in the draft Kuala Lumpur Structure Plan 2040 (KLSP2040).

The structure plan is to guide Kuala Lumpur’s physical development over the next 20 years and to ensure there is enough land to support long-term population and economic growth while maintaining a good living environment.

Most of the people queried had said they wanted the new plan to address existing issues, chief among which were traffic congestion, overdeveloped townships and other concerns that affect their daily lives.

Financial analyst Ivy Yap, 30, who lives in Segambut, said the plan should include more public transport that covered city areas currently not serviced yet.

“I hope we can get more trains with higher frequency that connect highly populated residential areas as well as more functional platform design for commuters.

“Increase in transportation hubs and buses can reduce the distance of the first-mile and last-mile connectivity in the city.

“Wider roads and better infrastructure are what I think is needed to improve traffic flow in the city,” she said, adding that both public transport and better road system went hand-in-hand in addressing the daily high traffic volume in the city.

“Since there is a property glut now, the upcoming development plan should focus on addressing long-existing problems that plague the city.

“Take Sri Petaling for example, there are about 10,000 residential units here and population of about 50,000. Major traffic gridlock and lack of parking space in this area remain unresolved.

“This is something most townships in Kuala Lumpur are facing, where road access and the traffic dispersal system are not good enough,” he said, adding that City Hall should make use of vacant lots to enhance existing infrastructure and parking facilities.

Tan also said there should be more focus on tourism, which could contribute to the country’s gross domestic product.

“The plan should include ways to boost tourism, by having more attractions around these areas,” he said.

“Core residential areas should remain as such and properties in the neighbourhood should not be converted for commercial purposes as it would compromise safety and other facilities for the community.

“Sewerage management should be improved to avoid more flash floods in the city in light of recent heavy rainfall,” he said.

Salesman Farid Sulaiman, 42, said the KLSP2040 should include urban regeneration efforts.“There isn’t a lot of vacant land and the government should think about regenerating some unused space to give it a new lease of life.“Buildings with heritage values should be kept or revived,” he added.

DBKL executive director (Planning) Nurazizi Mokhtar said the KLSP2020 was gazetted in 2004 and envisions Kuala Lumpur to be a world-class city by 2020.

Nurazizi also said that changes could still be made to the KLCP2020 that was gazetted on Oct 30 last year, as section 17(1) of The Federal Territories (Planning) Act 1982 (Act 267) states that the mayor may at any time propose for alteration, addition, revision, repeal or replacement in whole or in part of a local plan.

DBKL had received several requests from developers and landowners to change the land zoning and intensity. The first draft would include changing of three plots of land in Wangsa Maju-Menjalara, Bukit Jalil-Seputeh and Bandar Tun Razak-Sungai Besi strategic zone.

the KLCP2020 starting today until Dec 2 at DBKL City Planning Department on level 13 of DBKL headquarters at Jalan Raja Laut. Feedback and suggestions can be sent

to DBKL in the form of a letter to klmycty2040@gmail.com

Nurazizi said, “DBKL is now preparing the Draft KLSP2040 which will be in tandem with national aspirations, vision and the sustainable development goals (SDGs 2030). The theme is ‘Kuala Lumpur City for All’.

“It is our aspiration to make Kuala Lumpur a prosperous, healthy, safe and thriving city that offers quality and sustainable living. It is also a part of the new urban agenda that we have adopted from the United Nations, whereby we pledge to ensure that ‘no one is left behind’.

“The ‘City for All’ vision is supported by six goals, which are Innovative and Productive; Inclusive and Just; Healthy

and Vibrant; Climate Smart and Low Carbon; Efficient and Eco-friendly Mobility; and Integrated and Sustainable Development.”

He added that involving the public in the planning process would give them a sense of ownership.

“Public feedback allows residents to be directly involved in the city’s development and only then it will be a shared responsibility among all residents.

“Public participation sessions will be implemented at different levels where stakeholders will be given a broad understanding of the development plans in various platforms. 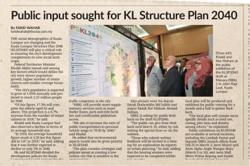 Tough to give input on structure plan