JOHOR BARU: The Orang Seletar or Orang Laut tribe in Kampung Bakar Batu Perling near here are hoping that the Johor government will not neglect their well-being.

Village head Tok Batin Kais Tee, 56, said their livelihood had been affected, with less catch from the sea since a land reclamation project barely two kilometres from their village started about a decade ago.

He said the land reclamation had damaged mangroves and river banks, the sanctuary of ketam bangkang (mangrove mud crabs) and freshwater prawns.

“Last time, we used to fish in the waters off Danga Bay but nowadays, we have to go to Kota Tinggi or areas near Gelang Patah, ’’ he said.

Kais said a decade ago, the mangrove mud crabs were sold for about RM12 per kg because of a bountiful harvest but the price had now rocketed to between RM40 and RM50.

“Today’s price is good but we would be lucky if we are able to bring back about a kilogramme or two of crabs after spending hours out at sea, ’’ he lamented.

He said the fishermen had no choice but to travel to Kota Tinggi by car or Gelang Patah by boat, located about 45km and 13km from their village respectively, to fish.

His wife Yang Tom, 55, urged both the federal and Johor governments to look into the plight of Orang Seletar as they are finding it hard to adapt to progress and development taking place in Iskandar Malaysia.

“But the catch is getting less and less now, ’’ she said.

Yang hoped that the state government would build a concrete jetty to replace the existing floating wooden jetty which was run-down.

She said the villagers had sent their request for a new jetty to the state government in 2017 and 2018 before the last general election but no feedback was received until now.

Fisherman Daud Kancil, 31, said they rarely went out to fish now unlike in the past, and instead collect scrap metal, cardboard boxes, plastic bottles or cans for sale to karung guni men (scrap collectors).

“We can hardly make ends meet with our income as prices of basic goods in Johor Baru are high, ’’ he said.

For hundreds of years, these nomads lived in traditional longboats known as perahu pekajang.

Their boats are their homes for weddings and births, and only when a death took place did they come ashore to bury their dead.

They roamed freely in the waters of Johor and Singapore, and the seas were their playground and source of livelihood.

In the 1960s, the Orang Asli Affairs Department placed them permanently in villages set up specially for them. 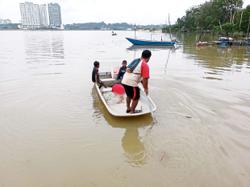 Call to protect the environment 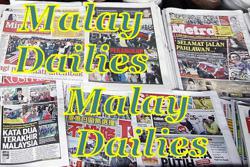