Preparing M’sian youths for jobs of the future

THE Malaysia International Trade Exhibition Centre (Mitec) in Kuala Lumpur was abuzz with activities as the #mydigitalmaker Fair 2019 took place in a lively and fun-filled atmosphere.

The two-day fair was spread across six zones — Space, MDEC, Inspirational, Discovery, Champions, Aspiration and Seniman — showcasing a variety of exciting booth exhibitions, panel discussions and competitions as well as a hands-on and interactive digital experience.

#mydigitalmaker Fair 2019 is a physical manifestation of the #mydigitalmaker Movement, a joint public-private-academia initiative by MDEC and the Education Ministry (MOE), aimed at creating a nation of digital makers by transforming Malaysian youth from digital users to digital producers. It was also a mission established to address the need for futureproofing Malaysians for the future of jobs.

“When the #mydigitalmaker Movement was introduced in 2016, MDEC embarked on a mission to ensure all Malaysian youths are ready for jobs of the future, ” said MDEC chief operating officer Surina Shukri.

“Today, I am glad to say that the movement has touched the lives of over 700,000 students nationwide, which shows tremendous promise that Malaysia is headed in the right direction.

“With that said, we have no intention of slowing down. Through the fair, we are exposing more youths to digital creativity and innovation, and showing them how their interests can be relevant to the jobs of the future.”

One of the highlights was the “Battle of Digital Ninjas”, where students groomed under the Digital Ninja programme pitched their ideas on solving real world problems. 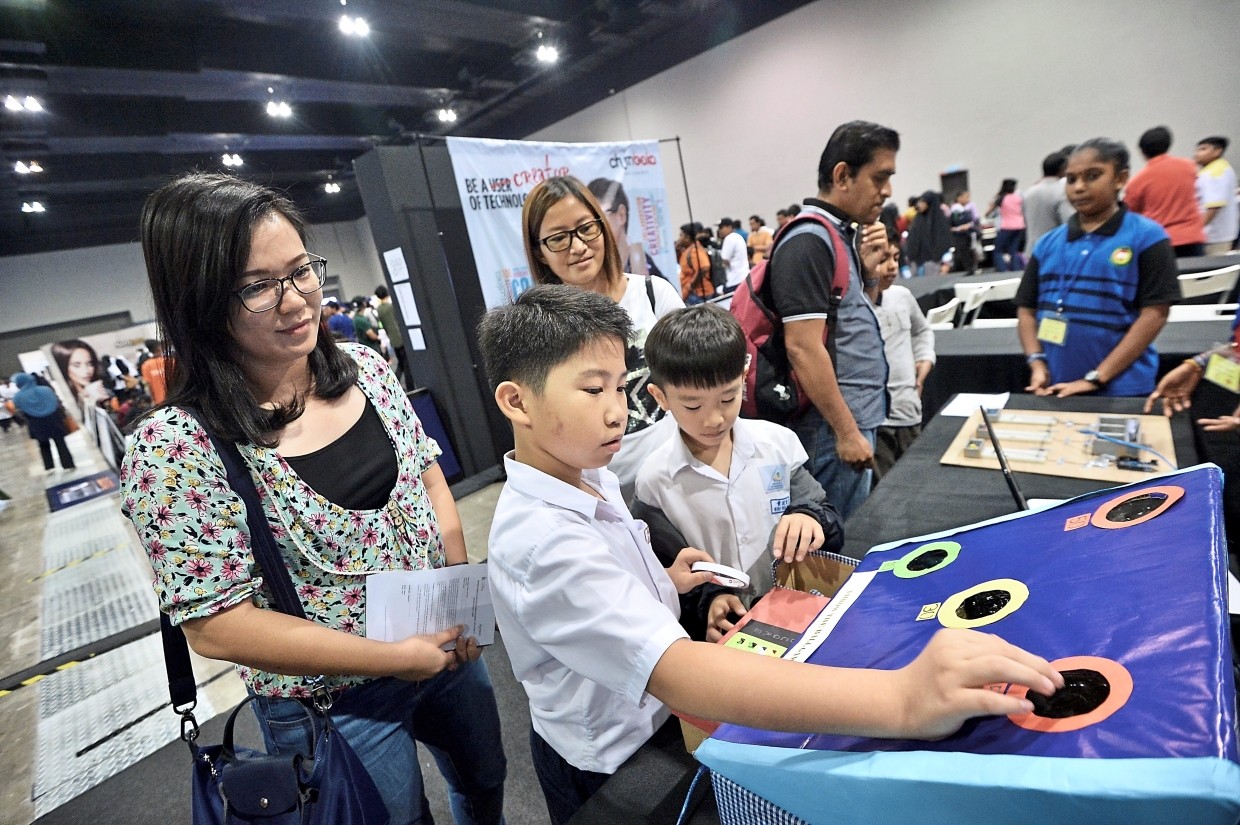 Mothers Ho (left) and Jacqueline Wong with their sons Jason (second from left), 10, and Wong Wen Tao, nine, who invented the ‘Throw the Ball’ game for the Junior Innovate 2019 competition by Chumbaka.

“Aufagold makes it easier for fish farmers to check on the well-being of their fish, ” said 16-year-old team member Jonathan Tan.

“The device uses a camera and an artificial intelligence model to constantly check on the fish as well as the water condition, such as the pH and oxygen level.”

“Robotics doesn’t need to be expensive. For instance, we created these robots from unused CDs, controlled by a microbit. Each costs no more than RM50, ” said Elvira Systems Sdn Bhd chief operating officer Izwan Hadi Zamhuri.

“My team created an arcade zombie shooting game. We like shooting games so we decided to create our own game, ” he said while showing visitors how to play the game at his station. “The fair is very informative and entertaining, a great event not just for kids but also for adults to learn new things, ” said Rahmi, adding that the visit was part of the school’s Robotics Club activity.

“This is his first time taking part in such a competition and it is good exposure for him to experience science and technology.

“Jason’s ambition is to be a pilot or an aeronautical engineer, ” said Ho.

“I am also involved in ‘i’M SET’, an initiative to encourage students to learn robotics and programming. From there, we bring them to competitions, ranging from district to state and even international levels.

“My students come from B40 income families so they don’t get such opportunities at local schools. “Through this process, they get to learn a lot faster, develop their thinking and communicating skills, and improve their cognitive and problem-solving skills, ” she explained.

“The #mydigitalmaker programme has shaped me in terms of teaching methods.

“Rather than focusing on giving content to students to meet the exam-oriented system, I look at critical thinking and soft skills that I think are much more important to create a well-rounded student in preparing them for the future, ” said Norhailmi, who is also an education Youtuber and blogger.

The platform will provide various enhancements, such as recommendations on the subjects they need to improve should they wish to target certain courses or universities and enhance the visibility for in-demand tech courses offered by premier digital tech institutions, leading to higher science, technology, engineering and mathematics (STEM) intakes and empowering school counsellors to play a more prominent role in promoting tech tertiary courses and preparing students for their tertiary pathways.