FOR the first time, the hiking trails in Bukit Gasing Educational Forest are being marked with proper signage.

The effort is being undertaken by Friends Of Bukit Gasing (FOBG), supported by Petaling Jaya City Council (MBPJ), to keep hikers from losing their way in the forest.

New routes were leading to the destruction of the flora and fauna ecosystem in the forest, said FOBG committee member Rajesh Mansukhlal.

“We planned to implement trail markers since 2015.

“MBPJ has been supportive of the idea but we faced challenges when it came to funding and the paperwork process.

“We were thrilled when our environment conservation work was noticed by Star Media Group chairman Datuk Fu Ah Kiow.

“We were nominated for the Star Golden Hearts Award last year and eventually, we won.

“With the RM5,000 prize money supplemented with FOBG funds, we managed to embark on this trail marker project, ” said Rajesh, who has been visiting the forest since he was 11 years old with school friends.

Rajesh said he met hikers from various states at the forest.

Occasionally, he met expatriates from Asia, Europe and the US who come for a hike after learning about the forest from their local peers.

“Each time I am in the forest hiking, without fail, at least two or three people would approach me to ask how to exit. All our FOBG members have encountered the same situation.

“Let’s bear in mind that people of all ages come here. When they take the wrong route, especially the senior citizens, they become exhausted, ” he said, adding that it was such a pitiful sight to see them lost.

“They may have taken the challenging route unknowingly and cannot find the exit.

“Our markings will be of great help to everyone here, ” he said.

Rajesh cited a recent case of a woman who got lost in the forest.

She managed to contact someone with her mobile phone for help, he said.

Rajesh said she described her surroundings and was rescued with the help of FOBG members and the Fire and Rescue Department.

“This forest has cellular reception almost throughout the two main trails.

“If anyone is lost they can call for help and cite the trail markers.

“This will speed up the rescue process, ” he said.

Two of the four trails were marked by FOBG recently.

The markers are made of pallet wood wrapped in coloured canvas and contain details such as the sequence of a particular trail, the total distance of the route and approximate time it would take to complete the route.

The markers are attached to a pole so that they are visible to hikers.

The first route, which is the shorter route, covers about 2.5km and can be completed within an hour.

The second route covers about 3.65km of the hill and can be completed within 80 minutes.

The remaining two routes would be marked at a later date.

Hikers are also urged to use the free Komoot app as it provides users with a map of the trails.

Users can snap photos with this app which tags the GPS location.

Rajesh, on behalf of FOBG, hoped a forest preservation committee would be formed.

It would discuss and create plans to improve the health of the forest.

“At the moment, the forest is managed by MBPJ and it may have its own experts.

“However, it is best if we have a dedicated committee with more experts from different segments of society for this forest.

“We have good support from our Bukit Gasing assemblyman Rajiv Rishyakaran and our councillor Derek Fernandez, ” he said.

However, he added, a strong pool of talent was needed to protect the leftover green lung for the future.

“We hope Lembah Pantai MP Fahmi Fadzil will also come on board to help protect this forest, ” he said.

“The Kuala Lumpur part of the forest needs attention too.” Volunteers plant trees

There are signs of both flora and fauna becoming extinct in the forest, compared to the diversity that existed 50 years ago.

This could be because of the heavy recreational foot traffic or the development that was taking place on the Kuala Lumpur side of the forest.

The effects of global warming as well as human intervention has taken a toll on the forest, said FOBG chairman Ivan Pal Grewal.

“Trees in the forest are falling because of soil erosion. We used to have large ants that would eat the fallen wood but they no longer exist.

“Some bee hives no longer exist too. Likewise, various types of ferns and mushrooms are no longer around.

“The forest had more species of birds. The monkeys are always out in the neighbourhoods because there are no fruit trees in the forest for them to source for food, ” he said.

The volunteers planted fruit trees such as sentul, binjai and kundang to help the animals survive in the forest.

Forest trees such as merbau and meranti were also planted.

A MBPJ spokesman said all trees that were planted were based on the recommendation by Selangor Forestry Department.

“We have one of the world’s most expensive trees, which we call pokok berlian, surviving in this forest.

“We notice forest trees survive well here when we plant them.

“It is important that the public do not litter inside the forest and refrain from taking home any plants from here, ” he added. 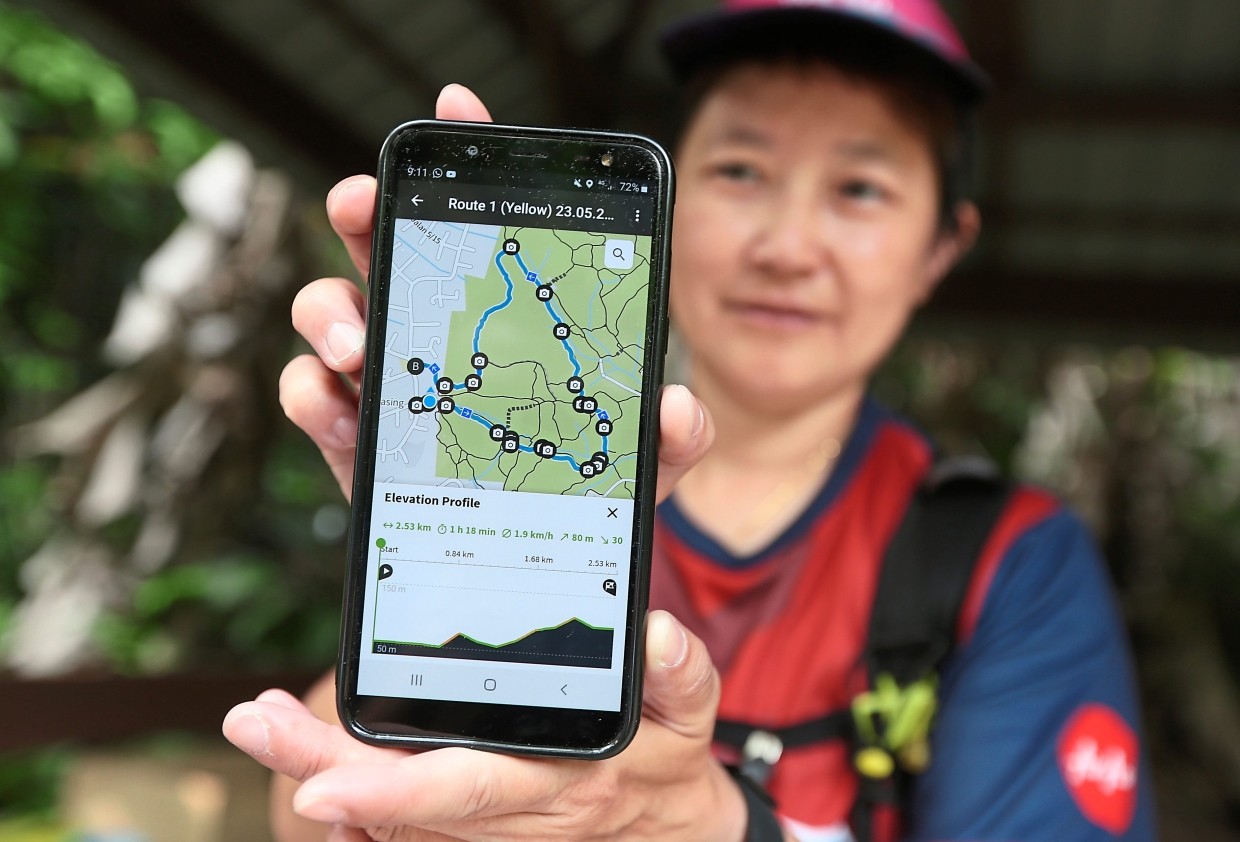 Fallen trees in the forest such as these are partly because of soil erosion.

In the past, there were more species of ferns in the forest reserve.

The forest provides a great outdoor hiking experience in the city but some have gotten lost because the trails were not marked properly.

FOBG hopes with the new trail markers, hikers will not damage the trees with their own markings.

Some 50 volunteers have planted various types of trees in the Bukit Gasing Educational Forest.

The trail markers are made of pallet wood wrapped in coloured canvas.