CREATIVE art and painting have proven to lend vibrancy and bring life to dead spaces and areas.

With the emergence of street art and murals drawn by local and foreign artists, dreary back lanes and low-cost flats are being given a new lease of life.

Realising this, several local councils in Selangor are taking a step further by bringing communities together and creating in them a sense of responsibility and ownership in such art projects.

The recently launched mural project at the Angsana low-cost flats in USJ 1 will see 100 murals costing RM150,000 being drawn in the area.

MPSJ is hoping companies will fund the project as part of their corporate social responsibility initiative.

This is a collaboration between the council, Zone 4 residents committee and its synergy partner The Art Market Malaysia.

Mohammad suggested that artists adopt the 3D mural trend instead of the proposed 2D ones.

Last year, 100 motorcycles were destroyed in an arson there.

Hence, one of the objectives of the recently launched mural project at the flats is to instil a sense of ownership.

“By having residents take part in whitewashing the walls, it is hoped that they will have a sense of ownership and belonging, ” she added.

MPSJ president Noraini Roslan said this was one of several mural projects to rejuvenate low-cost flats and alleys in the municipality. Abdul Hamid pretending to play a game of football with Mokhtar Dahari, a scene that brightens up a back lane in Ampang Point under the Senario Ampang project.

Previously, the council embarked on a similar project at the back lane of Jalan Kenari 5 in Bandar Puchong Jaya, Puchong.

The murals there were painted by students of The One Academy and Asia Pacific University of Technology and Innovation.

The new look has even given birth to a new name for Jalan Kenari 5 as it is now known as Kenari Lane Puchong.

Another two projects in the pipeline are the Kenari Lane 2.0 mural and Subang West beautification project.

“Back lanes are supposed to be public space and we want to return it to the public, create a safe, accessible and walkable area.

“It is well-maintained until today and many people get their breakfast from the hawkers at Kenari Lane, ” said Ng.

“The mural projects have changed the back lane landscape to be cleaner and more orderly as enforcement is carried out during the project.

“It has also turned back lanes into a safer place and cheerful environment for the public to utilise.

“As for the placemaking aspect, the murals attract the public to take photos there, ” he said.

Fancy standing tall at the edge of Bukit Tabur, having a meal at the Ampang Look Out Point or even playing a game of football with legend Mokhtar Dahari?

All of these will soon be possible once the Senario Ampang mural project is completed by MPAJ.

The once dingy and dirty back lane along Jalan Mamanda 7 in Ampang has been spruced up and beautified with 3D murals decorating the walls.

The murals, which invite people to become part of the art are made up of vignettes of attractions as well as landmarks of the area.

“What we are doing is to bring life back into these spaces by developing them into bright spaces.“The spot can be turned into a lively place for people to gather, ” MPAJ president Datuk Abdul Hamid Hussain said.

The project is a collaboration between MPAJ and KPKT at an estimated cost of RM468,300. Students hard at work completing two murals on the backlane of Jalan Kenari 5.

“We chose the Ampang Point commercial area for this pilot project because there is a lot of foot traffic here.

“But pedestrians often have to share the space with vehicles and there are other obstructions on the sidewalk which does not make walking in the area pleasant.

“This is one way to utilise unused and forgotten spaces into functional ones, ” Abdul Hamid said.

The entire work was carried out in phases, where the first phase involved upgrading drainage and piping, relocating poles and cables for street lights, retiling and repaving the walkway and repainting the buildings with colourful murals.

Abdul Hamid said while it was challenging to get cooperation from some of the 14 business owners whose back doors faced the lane, it was worthwhile in the end.

“In the beginning, it was not easy to get the owners to understand what we were trying to do.

“We had to ask them to remove illegal extensions and not prepare food here.

“But when the place was cleaned up and the painting and repaving work started, they were eager to participate, ” he said.

He added that MPAJ saw the potential for back lanes to be economically viable tourism products as Ampang was a stone’s throw from Kuala Lumpur city centre.

The beautification project was initiated in May and there are plans to undertake similar projects in two other back lanes in the Ampang Point area.

Artists Hafiz Nazri and Nurul Afiqah, who were part of the team that painted the murals, said hosting activities at the art street would help bring in new people into the area.“This is a very localised area, so there may not be new visitors. But organising screenings or similar events can bring in people and make the place sustainable in the long run, ” Hafiz said. Back alleys and side lanes in Bukit Bintang have been rejuvenated by street art.

The project was initiated by Kuala Lumpur City Hall (DBKL) in 2015, where 20 areas in downtown Kuala Lumpur were identified namely within Bukit Bintang, Jalan Alor and the Tun Razak Exchange (TRX). 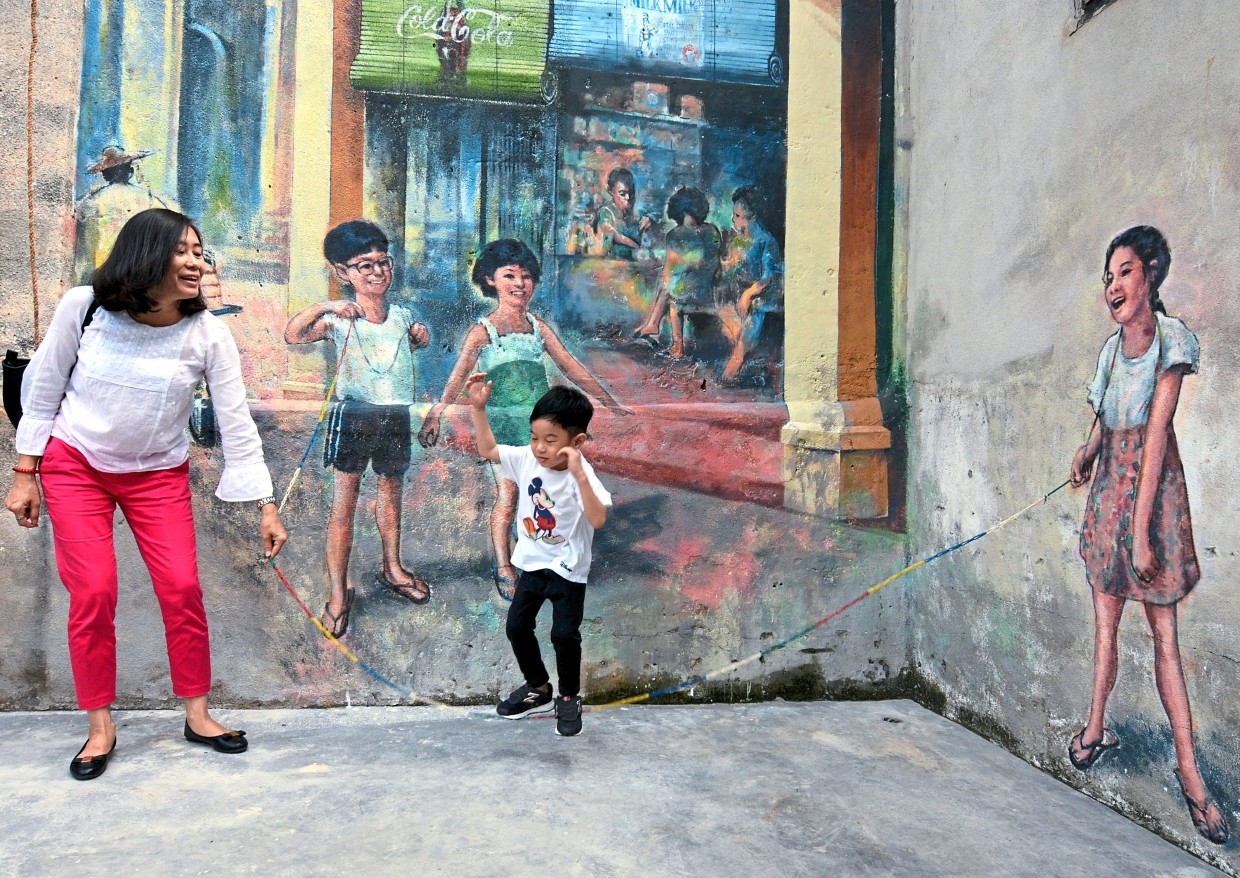 A woman playing a game with her son beside a mural along Lorong Panggung and Jalan Petaling in Chinatown.

It encompasses 10 shophouses, namely four along Lorong Panggung and six at Jalan Petaling, as well as a little hidden lane way.

The artworks depict the daily activities of early Chinese settlers living in the vicinity during the 1960s. The mural along the wall of RED by Sirocco hotel has been certified as the tallest mural in Malaysia.

The 25-storey mural on the wall of RED by Sirocco in Kuala Lumpur has been certified by the Malaysia Book of Records.

Sabah graffiti artist Kenji Chai, who took 21 days to complete the 87.1m-tall artwork, said he wanted to highlight Malaysia’s unique and diverse cultures through his creation.

The mural entitled “Courage To Dream” features a Dayak woman, tropical flora and fauna, as well as local hawker favourites. 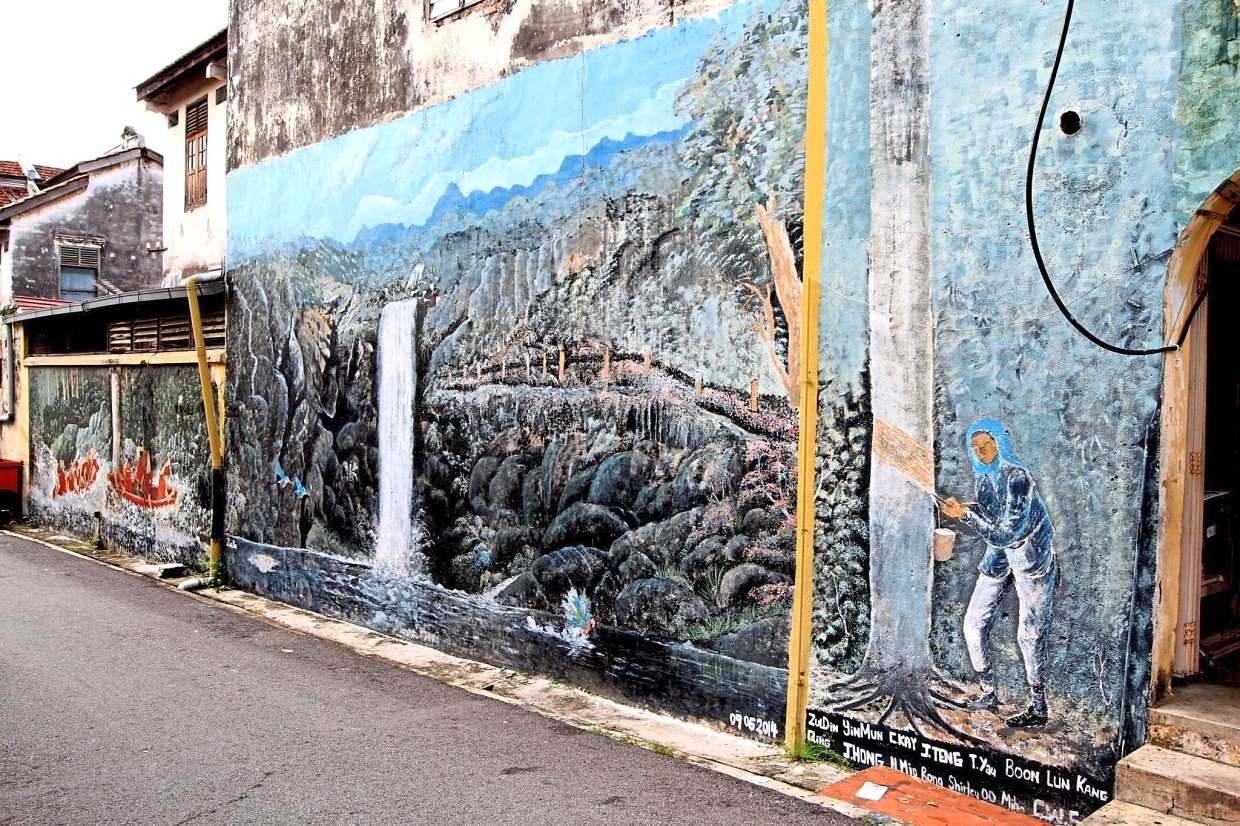 The back lanes and walls of old buildings in Kuala Kubu Baru in Hulu Selangor have been transformed into works of art by local and international artists at the inaugural 2016 Kuala Kubu Baru International Art Festival themed “Art Haven in the Hills”. A mural themed “Change and Reflection” in SS19 is the work of Britain-born artist Gabriel Pitcher depicting a woman looking at her reflection in the mirror.

The “Beautify Subang Project” was an initiative by DPI Holdings Bhd. The mural uses aerosol paint made by the company. In Sekinchan, Selangor, there are several mural projects, notably one at Jalan Radin, depicting life and symbols in Sekinchan such as padi fields and a big rice bowl, and one opposite the Sekinchan post office featuring the late comic book writer, editor, publisher Stan Lee and Marvel heroes. Murals in Laman Seni 7 in Shah Alam aims to redefine back lanes.

Laman Seni 7 is a pioneer project organised by Shah Alam City Council (MBSA) to redefine back lanes into a useable space for the community.

The artwork and visuals are here selected through the Laman Seni 7 (LS7) competition, which saw more than 100 entries.

The project site is divided into four art categories, namely 3D painting, 3D installation, street furniture and painting on site, as well as the concept of “community of Shah Alam”.