Going the extra mile for pilgrims

PILGRIMS attending this year’s St Anne’s Feast can use a buggy service on the last three days of the 10-day event which begins tomorrow.

“The buggy with seats for six persons will ply between the main gate and The Shrine, which is the old St Anne’s Church building, on July 26, 27 and 28.

“This service is mainly to assist children, women and senior citizens who may get tired walking on the church grounds,” he said in an interview.

Father Leo said the church had been spruced up to welcome over 100,000 pilgrims from all over the country and overseas for the feast themed ‘Call To Mission’.

He said some 350 volunteers, including students from SMK Jalan Damai and SMJK Jit Sin Bukit Mertajam as well as National Anti-Drug Agency members and general workers from the Seberang Prai Municipal Council took part in a mass gotong-royong with church members. 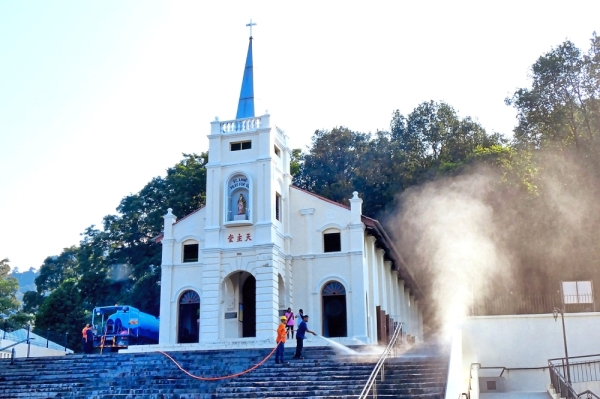 Council workers using jet spray to clean the stairs outside The Shrine.

“During the feast, about 1,300 volunteers including those from other Catholic churches as far as Sungai Petani and northern Perak will be assisting us.

“This year, there will be one grand candlelight procession on July 27, instead of two as in previous years.

“As such, we expect a big crowd of over 50,000 for the open-air English mass to be celebrated by Penang Catholic Bishop-cum-parish priest Datuk Sebastian Francis at 8pm.

“After the mass comes the 9.30pm procession in the church compound.” Father Leo says they expect a huge crowd of over 50,000 for the open-air English mass at 8pm on July 27.

Father Leo said there would be a two-hour evangelistic concert at 10pm the same day.

In keeping with the feast’s Go Clean, Go Green policy, pilgrims are advised to bring their own cutlery, reduce the use of plastic bags and throw rubbish into the bins provided, while polyfoam utensils are banned.

“The collection of donations from pilgrims, aside from those that the church has permitted at selected booths in the compound, is strictly prohibited,” said Father Leo. “Those caught trying to solicit funds from pilgrims will be referred to the police officers on duty.

“Pilgrims can seek help from our 106 appointed Ministers of Hospitality who will be wearing dark green sashes,” he said.

For live streaming of the 8pm mass on July 27, visit

or check out the church’s Facebook at St Anne’s Sanctuary BM.

Those keen on donating towards the pilgrims’ free meal project can call the church office at 04-538 6405.

Alternatively, they can email stannebukitmertajam@gmail.com.