They are respectively the baju Melayu Teluk Belanga, ghazal and zapin which are synonymous with the southernmost state in the peninsula.

Johor Heritage Foundation (YWJ) director Mohd Ekmaluddin Ishak said the foundation had been tasked by the state government to undertake the patenting procedures.

“We have to patent these cultural elements as they reflect Johor’s intangible heritage and identity,’’ he said.

Mohd Ekmaluddin said Johor did not want other states and other countries to claim these cultural elements as their heritage.

He said Johor must act fast as it did not want to see a war of words like what happened between Malaysia and Singapore when the latter bidded for United Nations (UN) recognition for its street food last year.

“We have started compiling the necessary documents,” said Mohd Ekmaluddin, adding that Johor would submit the application to Unesco next year.

According to historians, the Teluk Belanga style was designed by Sultan Abu Bakar Ibni Temenggong Daeng Ibrahim to commemorate the shift of Johor’s administrative capital in 1866 from Telok Blangah in Singapore to Tanjung Puteri, now called Johor Baru.

Sultan Abu Bakar, who is the great-great grandfather of current Johor Ruler Sultan Ibrahim Ibni Almarhum Sultan Iskandar, was known as the Father of Modern Johor as many historians have credited his vision for Johor’s development in the 19th century.

The Teluk Belanga style features a round neckline with a slit in the middle that is connected by a detachable single button known as sebuku garam, which is usually made from semi-precious or precious stones.

This differs from the cekak musang style, which has five buttons fixed at the placket. Nowadays, it sports a modern mandarin-like collar with three buttons.

The toughest part about making baju Teluk Belanga is cutting the round neckline known as bulan (moon) and sewing the tulang belut (which literally means eel’s spine) for the neckline compared to the stiffer and raised cekak musang.

Mohd Ekmaluddin said ghazal and zapin, which were popular in Johor and originated from the Middle East, were brought to the Malay Archipelago by Arab traders and missionaries in the 14th century.

“Over the years, Johor Malays have adopted both as their traditional musical group and traditional dance,’’ he said.

He said a study found there were 18 types of zapin in Johor, which were native to a particular district or community.

He explained ghazal in Johor was also different from that originating from the Middle East, as Johor’s version had evolved over the years with the music sounding Malay instead of Middle Eastern influenced. 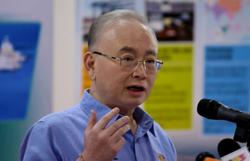