One of the two ponds at the Jalan 222 intersection with stagnant water.

FEDERAL Highway is one of the most heavily utilised road on a daily basis in the country, connecting motorists from parts of Petaling Jaya, Shah Alam and Klang to Kuala Lumpur.

However, the upkeep of the road – particularly within the Petaling Jaya boundaries – is far from satisfactory in the view of Petaling Jaya councillor Thayalan Krishnasamy.

He said there should be regular maintenance and supervision of the highway, especially the affected stretch in Petaling Jaya, by Public Works Department (PWD). 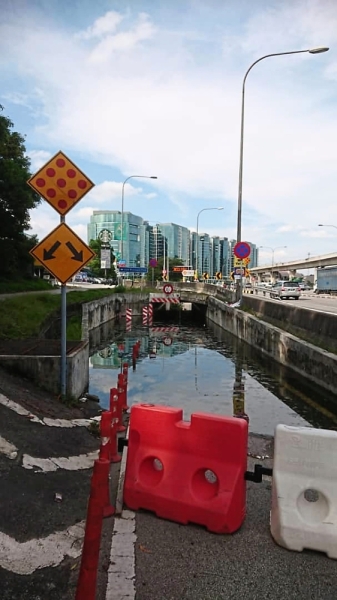 This stretch of motorcycle lane from Shah Alam to Kuala Lumpur floods on a regular basis.

He stressed that it was a major arterial road in Klang Valley and as such it should be kept in pristine condition for the safety of motorists.

It was also important for presenting a good impression to potential investors travelling to these important cities.

Thayalan said he had been observing the situation on Federal Highway and noted that the highway was plagued by problems since the Batu Tiga toll in Shah Alam was removed.

He is most concerned over the damaged guardrails, landscape, poor lighting at the motorcycle lane and uneven road surfaces. 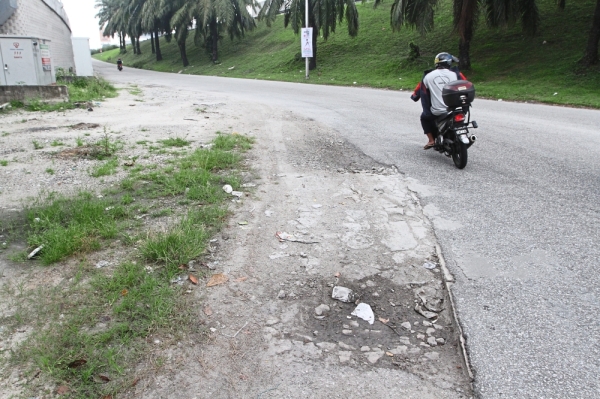 Uneven roads are a bane along the Federal Highway.

“The structural and landscape maintenance of the highway looks neglected in recent times. Federal Highway is a corridor to our industrial zones and it will help to instil more confidence in investors to see the road in good condition as well as properly landscaped.

“Currently I see poor landscape with unpruned trees and barren spots that previously had some form of landscape.

“It is not pleasing on the eyes. We can do better than this,” he said. 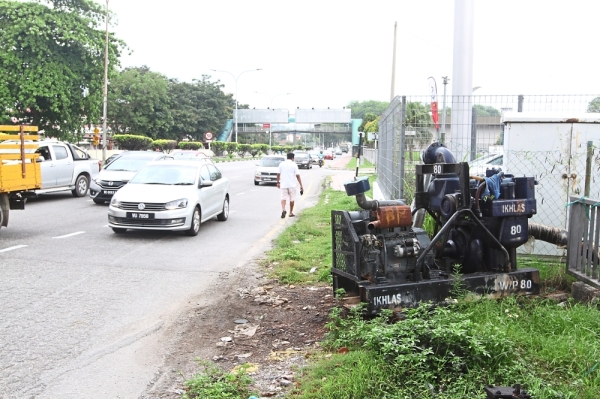 A pump left next to one of the stagnant ponds does not look like it is functioning.

He also pointed out that the recently constructed overhead motorcycle lane was not built with quality finishing, citing as example the rough walls.

“The new gratings over the drains in Jalan 222, near the overhead motorcycle lane, also lack quality.

“The gratings were not secured well and could be stolen easily.

“This area is prone to flooding and if the gratings are stolen it will endanger road users who will not notice the gaping hole left by a missing grating,” he warned. 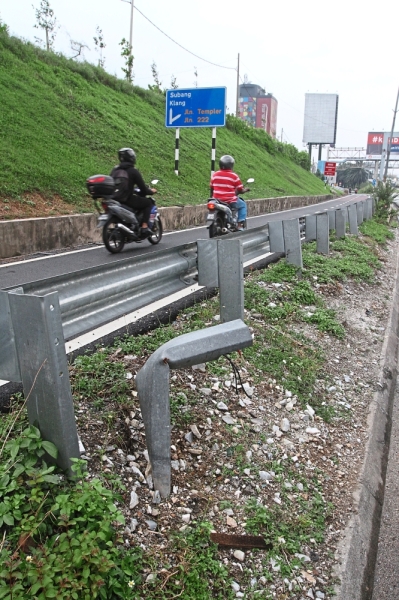 A damaged lamp post is left with wiring exposed along the Federal Highway.

Thayalan said the road shoulders of Jalan 222 was left in poor condition after the flyover construction work.

He urged PWD to check on the contract of this project and have the contractor fix all the resulting problems.

Other problems, he said, were the damaged road gutters awaiting repairs and parts of the road had sunk because of weakened road foundation.

The road surface in the vicinity of a bus stop, near Sungai Way, along the Federal Highway was bumpy which he said could pose an accident risk.

According to Thayalan, the walkway connecting Federal Highway (Kuala Lumpur-bound) to Jalan Utara has been damaged for several years.

He also noted that electric cables were hanging low at some parts of the highway. 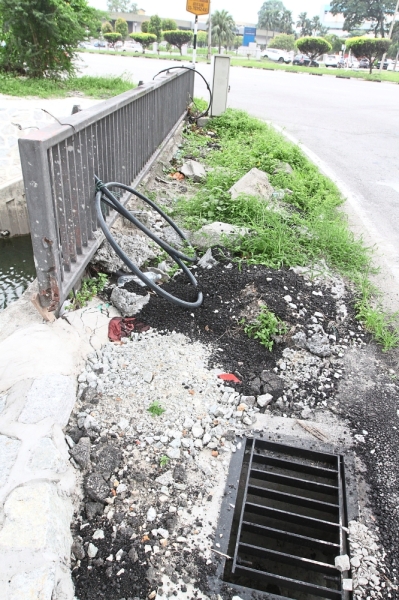 Poor workmanship is evident at Jalan 222 close to the new flyover for motorcycles.

He complained that street lights were sorely lacking.

“If not for the illumination from advertising billboards along the highway, the lanes would be in complete darkness.”

The underpass where Jalan 222 intersects with the Federal Highway is not well-lighted either, and this too poses a danger to motorists.

Motorcyclists complain that about half of the street lights at the lanes along the Federal Highway stretch both in Petaling Jaya and Shah Alam were not lighted.

“Can’t the authorities see the importance in ensuring the street lights along the motorcycle lanes are functioning at all times?”

Ariffin said the motorcycle lanes in Petaling Jaya and Shah Alam were very unsafe for users.

“There are stretches from Shah Alam heading to Kuala Lumpur such as KM18.5 where it is flooded all the time, making it dangerous for motorcyclists.

“I am left with no option but to use the lanes on the highway itself because the motorcycle lanes are in such bad condition. 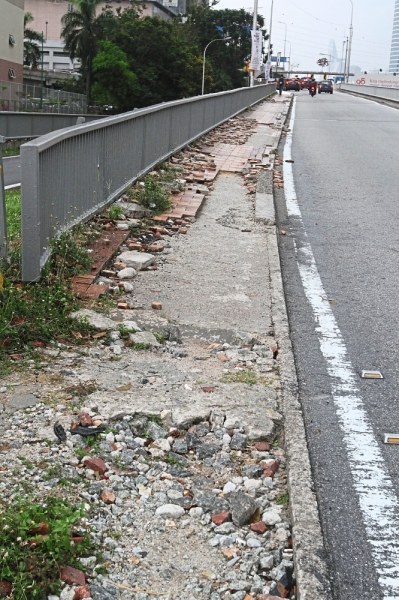 The pedestrian path along the road connecting Jalan Utara to Federal Highway (Kuala Lumpur-bound) has been badly damaged for over two years.

“The overgrown vegetation along the motorcycle routes were cleared after StarMetro highlighted it.

“But I am still waiting for the street lights to be repaired.

“I have heard of cases where motorcyclists were mugged in these dark lanes. Thayalan is concerned about the state of Federal Highway, especially within the Petaling Jaya boundaries.

Also at the intersection are what appear to be two ponds with stagnant water.

“There must be a long-term solution so that these two ponds do not turn into mosquito-breeding grounds,” said Thayalan, who doubted that the water pump in one of the ponds was functioning.

He said based on his research, a billboard company was in charge of landscape maintenance along the Petaling Jaya stretch of Federal Highway in return for advertising space.

“I do not see much maintenance work carried out by the said company, so I hope the authorities will look into this too,” he added.

“We are working with other agencies on the upkeep of the highway.

“As for the Jalan 222 area, yes some of the road surfaces have problems.”

He said there was a concessionaire in charge of the motorcycle lane flyover.

“It is in their job scope to ensure everything is handed over to us in good condition.

“Ever since the work was completed, we have been asking the concessionaire to fix the road surfaces,” he said, adding that

PWD would take stern action against the company for ignoring the department’s repeated directive.

Ruslan said the landscape works were to be carried out by a company given the concession for the advertising billboards on Federal Highway.

“However, since their contract does not list in detail their job scope such as clearing old bunting, they are not doing it.

“We will make sure all these details are included when we renew the contract,” he said.

As for the damaged guardrails, he said it required additional funding to fix.

“We recently received the funds, so we will be repairing it in stages,” he disclosed.

He also assured that the faulty street lights would be replaced in phases.

“The cables are all in place but the light bulbs were stolen. In some places, the switchboard is broken.

“Vandalism along this highway is a major issue,” he added.

Ruslan said he had informed his team to make sure the basic facilities were fixed first to avoid time wasted on waiting for the concessionaire responsible to do the work.