A mole removal stall at the SS2 night market in Petaling Jaya.

THEY are not medical doctors but they call themselves “master” and carry out aesthetic procedures at night markets, counting on people’s insecurities.

These practitioners carry out mole removing procedures using toothpicks or needles while applying an unidentified and unlabelled substance without wearing gloves.

A common feature at such stalls are displays of “before and after” pictures to show their “successful” mole removals.

These masters are not qualified doctors and they carry out procedures in the most archaic manner, employing mysterious liquids stored in brown bottles that they generally call “herbal medicine”.

The procedure is carried out in an unsanitised night market environment which has thousands of passers-by.

Their mole removal paraphernalia are kept in exposed containers.

One unfortunate client, Jamie (not her real name), told StarMetro that “the master” had applied some unknown substance even on parts of her face that did not have moles.

The procedure costing RM790 took place at the SS2 night market in Petaling Jaya and she is now left with scars.

Her mother Clarissa (not her real name) felt cheated and is traumatised by the whole incident.

Clarissa has since lodged a police report over her daughter’s predicament and hopes the authorities will nab these unscrupulous traders. Photo of Jamie taken by her mother when she saw about 80 white spots from the mole removal cream despite them having earlier told the woman operating the night market stall to remove only six moles.

“My daughter wanted to remove some moles on her face.

“Reluctantly I accompanied her to the pasar malam that had this service and we discussed with the woman at the stall to remove only six moles.

“I was informed that each mole removal will cost between RM10 and RM20 depending on the size.

“We clearly agreed to remove only six.

“When I turned back around after speaking to my sister-in-law, I saw the woman had applied a white cream all over my daughter’s face.

“I was stunned to see about 80 white spots from the removal cream on my daughter’s face. 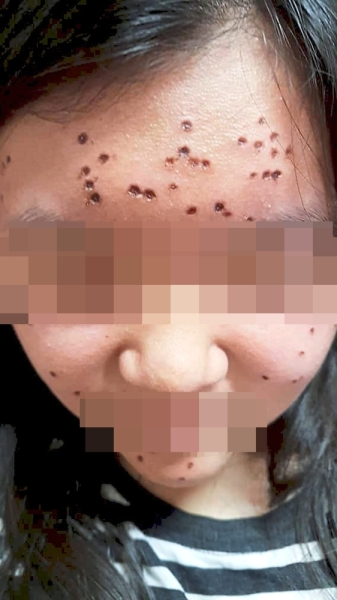 Jamie’s face two days after the procedure at the SS2 night market.

“I felt helpless because my daughter’s face was in the hands of the woman. After applying the cream, the woman pricked the spots with a needle and then scraped the face with a toothpick.

“My daughter began crying when the scraping started.

“I was in a state of shock and just watched the entire process in horror. I have no idea why I did not stop the procedure. I think I was worried that the woman carrying out the procedure would leave my daughter halfway and it may result in a worse outcome,” said Clarissa.

After the ordeal, Clarissa was informed that it would take about a week for the face to clear.

While Jamie was in a lot of pain, the biggest blow came when Clarissa was given the bill.

“At first I thought I heard wrongly when the woman said RM790, but she repeated the amount. Three weeks after the procedure, Jamie is left with scars on her face, including spots where she never had moles.

“No one brings that much cash to a night market, so I told her I didn’t have the money with me. I was told to do online bank transfer or withdraw money from the ATM at a nearby bank.

“Still in a state of shock, I returned home and made an online transfer. However, today I regret everything that happened and I want my money back,” said Clarissa.

She added that the woman at the mole removal stall was dishonest with the cost and the procedure had left scars on her daughter’s face.

Jamie said she did not wash her face overnight after the procedure as she experienced excruciating pain.

The teenager was also too embarrassed to go out of the house and skipped school for a week.

“I did not have 80 moles on my face but this woman claimed to have removed that many. A day after the procedure I had dark scars on my face,” said Jamie.

Chan T.K. was another person who underwent mole removal at the same night market.

“I tried this procedure and it was painful. 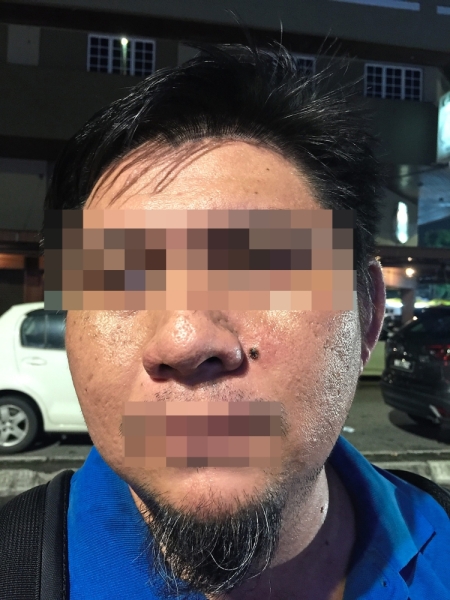 Photo taken right after the procedure. Chan felt as if his skin was burning.

“It was done in an unsanitary condition using a toothpick. I will never recommend it to anyone else even though I paid only RM20.

“My mole was large but now I have a hollow scar on my face. A week after the mole removal procedure at the night market, Chan now has a hollow scar on his face.

A Petaling Jaya City Council (MBPJ) Licensing Department spokesman said the council would never issue licence for such a business at night markets.

“No one is permitted to carry out any intrusive aesthetic procedure at night markets.

“Sometimes the business licence could have been sublet to others. Some will apply to sell drinks but will be doing some other business.

“We will look into this complaint,” said the spokesman.

Dr Chen Tai Ho, a qualified aesthetic doctor, said that in Malaysia, only doctors with Letter of Credentialing and Privileging (LCP) can practise aesthetic treatment such as removal of moles.

He said the Health Ministry had become more stringent and had come up with guidelines for the aesthetic medicine field.

“Even an ordinary general practitioner (GP) is not allowed to carry out these procedures, much less those at night markets,” he said. 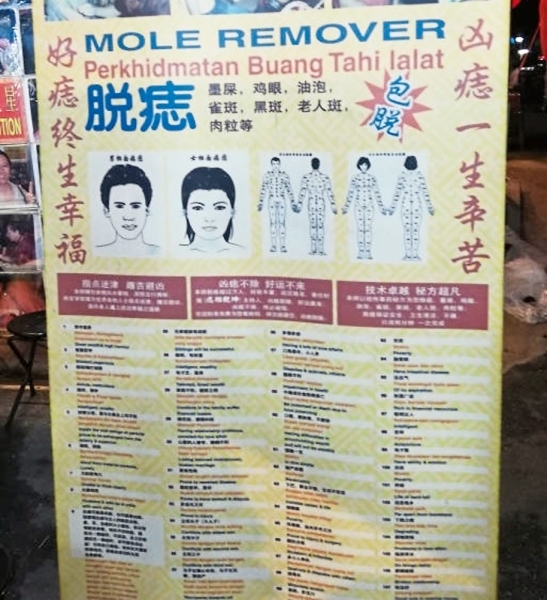 Banner advertising services at a mole removal stall set up in a night market.

He pointed out that doctors had the licence and insurance coverage in case a mistake happens. The patient would be protected too. And doctors use only products accredited by the ministry.

“These night market traders who carried out the procedure might be using products bought online, nobody knows.

“I think the cream they used in these procedures might have contained some form of acid. If it is too strong, it will cause scarring,” said Dr Chen.

“Night markets are an unhygienic place, with people smoking in the vicinity.

“There is a chance of these scars becoming infected in such an environment.

“In a proper clinic, the environment is sterile and there are equipment to make the procedure bearable for the patient and the skin less inflamed.

“Some of these scars caused by botched procedures may be permanent.

“We have patients who come to us to fix botched procedures.

“In some cases, the scars can be lightened but we are not able to remove them entirely.

“We have seen all sorts of patients. Some would do aesthetic procedures with a group of friends at beauty centres or even at a person’s house,” he added.

Dr Chen also said that the night market trader would not be assessing the mole, which could turn out to be cancerous.

“The mole might be removed but no steps are taken to treat the underlying problem.” 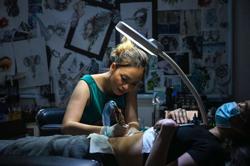