TARCian Run 2019 is back to offer an enjoyable outing during National Day celebrations in August.

The fifth edition of the run is being organised by Tunku Abdul Rahman University College (TAR UC) and the TARCian Alumni Association (TAA).

With the theme “Run for Unity”, it will be held concurrently on Aug 18 in TAR UC’s Kuala Lumpur main campus as well as the Penang, Perak, Johor, Pahang and Sabah branch campuses.

Prizes worth RM5,000 have been allocated for the men’s category and another RM5,000-worth of prizes for the women.

Lim said they hoped to raise RM50,000 from the run for the TAR UC Education Fund. 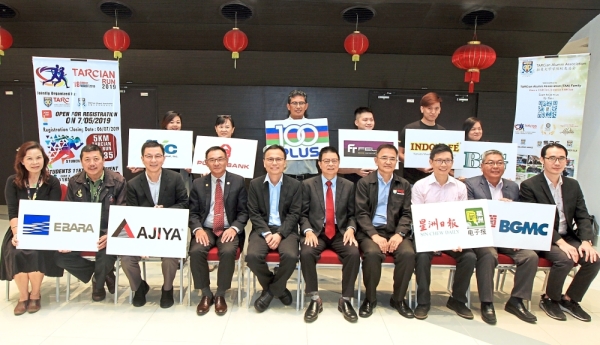 Entrance fees range from RM35 to RM60 per participant.

“More than RM20,000 worth of lucky draw prizes are available too.

“I hope alumni, staff and students will come forward to support the run together with their family members.”

Lim said the run was also being organised in conjunction with TAR UC’s 50th anniversary this year.

“That is why it is called Run for Unity,” he shared.

“I look forward to not only flagging off the run, we will all run together,” said Prof Lee.

He urged students and alumni to register as soon as possible as every subsequent 100th participant would get a free TAR UC 50th anniversary T-shirt.

The closing date to register is 5pm on July 5. Participants will also receive sponsored T-shirts.

TAR UC students and staff (including family members), can register online for the run and make payment at the Bursary counter at Level 2, Bangunan Tun Tan Siew Sin, the main campus or the respective branch campus offices.

It was held to raise funds for the TAR UC Education Foundation, specifically the construction of a Student Centre.