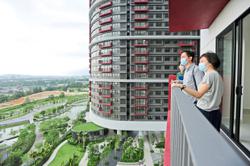 WIZtalk by speaker Tee Siau Thung at the Woman in Zcience (WiZ) event at Tech Dome in Komtar. Seated in the front row among the guests is Chong Eng (third left).

WOMEN and girls are encouraged to break the glass ceiling in science, technology, engineering and mathematics (STEM) and achieve different positions in their careers.

“The glass ceiling is something that you cannot see but it is there.

“There are many positions that were not held by women before and we want them to aim and strive to break the glass ceiling.

“They can achieve whatever they want and take up any position they want to and work hard for it,” she said, adding that there should be no discrimination or gender stereotypes surrounding STEM.

Chong Eng was speaking during the launch of the Women in Zcience 2019 event at Tech Dome Penang in Komtar recently.

Held for the third year, the two-day event was participated by around 750 students from more than nine schools in Penang.

During the event, Tech Dome Penang also kickstarted the STEM Nurturing Intensified Program (SNIP), which is a special pilot programme to promote STEM to girls.

In his opening speech, Tech Dome Penang chief executive officer Dr Khong Yoon Loong said they hoped to motivate students and keep their interest in science through the programme.

“For a start, only 40 places were allocated to each of the senior and junior groups.

“There will be some criteria to be fulfilled and the selected students will enjoy ample privileges and have some commitments to bear,” he said, adding that the application letters would be distributed to school teachers. Students taking part in one of the activities during the Woman in Zcience (WiZ) event at Tech Dome in Komtar, Penang.—Photos: MUSTAFA AHMAD/The Star

“Now, we are seeing fewer and fewer students taking up STEM.

“If we can make it fun and share with them on what they can do with science and how fun it is, I think we will be able to encourage more students to stay with science subjects,” he said.

The event to mark International Women’s Day was organised by the Penang Women’s Development Corporation (PWDC) together with Tech Dome Penang, and in partnership with Intel.

It aimed to achieve gender parity in social, political, cultural and economic sectors of the society.

This year, the theme for International Women’s Day, which is celebrated every March 8, is ‘Balance for Better’.

Some of the event highlights were sharing sessions conducted by experts in the field, a self-defence workshop and multiple hands-on workshops that were related to science.