For want of a liveable space

The roads in Valencia Apartments have not been resurfaced in years and the drains are clogged, causing flash floods during the rainy season. — Photos: ANIS ABDULLAH/The Star

NESTLED in the heart of Taman Sri Muda, Shah Alam, is a neighbourhood that has locals fearing for their children’s lives and their future.

Residents of Valencia Apartments have been forced to live in squalor with dirty corridors, rowdy neighbours and even drug addicts hanging around the stairways.

Muhammad Jamal Muhammad Omar, 46, said his sister’s family is having a hard time living in the area as they have two young girls at home.

His sister and two nieces are often forced to wait for her husband to come home before attempting to use the staircase after 6pm.

“You have drug peddlers and addicts hanging around the stairways, others urinate there and the stench is unbearable. We are afraid for the girls’ safety,” he said.

Young boys, he added, were being influenced by all the negative activities there and some have started smoking.

He said cigarettes were readily available at the many sundry shops in the area.

Ground floor units of the five-storey apartments have been renovated and turned into shoplots, mostly run by foreigners. 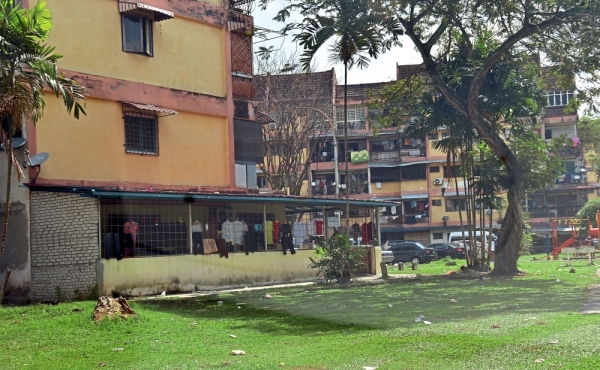 One of the ground floor units that has been extended onto the playground.

Locals, however, claim that they are not allowed to run businesses on the premises.

Another resident, who wished to be known as Sundram, said some petty traders have even taken up parking lots to conduct businesses in the evening.

He said the traders allegedly vandalised the complainants’ cars.

“We cannot park cars at our own parking lots. We even pay maintenance fees for the block, but it is a dump,” added Sundram.

The roads have not been resurfaced in years, while the drains are clogged, causing flash floods during the rainy season.

There is also a surge in dengue cases among adults and children.

Resident C. Patrick, 22, said the area was a known dengue hotspot but little has been done to curb the problem. Some petty traders have set up their temporary stalls and taken up the apartments’ parking lots.

“We have lodged numerous complaints about this place to the local council. It is run by a management body, so the authorities are reluctant to come in,” he added.

Patrick also called for the authorities to take action against operators of illegal shops in the neighbourhood.

He said Shah Alam City Council (MBSA) raided the apartments and seized many items from the shops in previous occasions.

However, the operators got back the seized goods and were back in business, he added.

“We also saw the Immigration Department and police raiding the place, but the problems never cease,” he added.

Committee’s plightThe apartment’s management committee says it is fighting a losing battle with the illegal shop operators as well as to make living easier at Valencia Apartments.

“Nine units have been converted illegally. MBSA and the commissioner of buildings are aware of it. We have also issued letters to the landlords telling them about the problems,” he added.

The committee is also working closely with the police to stop the drug problems in the area. They even had two raids. 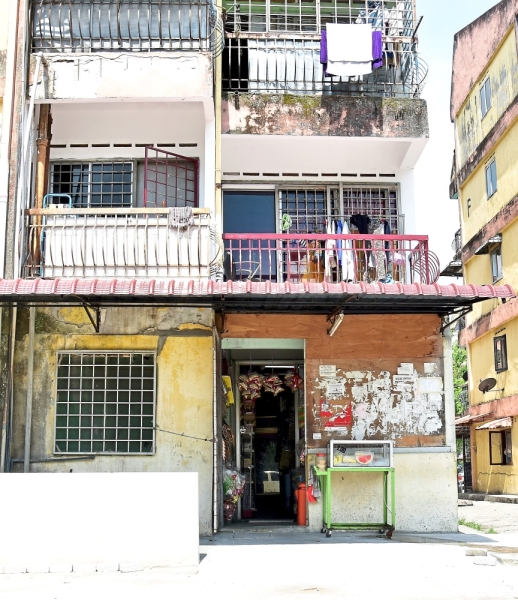 A ground floor unit at Valencia Apartments that was converted into a shop.

The management committee, he said, was often misunderstood as cooperating with the illegals.

“As property owners ourselves, we do not want illegal activities on our premises. We want to make this a liveable place and are working towards it,” said a committee member who declined to be named.

He said the management committee took up the reins from a dysfunctional joint management body that had not audited the accounts for up to six years.

After they took over in 2016, they were left with only RM5,000 in the accounts and a mere 10% of residents paying the maintenance fees.

Today, they have managed to slowly spruce up the space and 60% of residents are paying up the RM40 maintenance fee.

“We raised the matter with the Selangor government for the Skim Ceria fund and fenced the place.

“Next, we plan to resurface the road and paint the building,” he added. 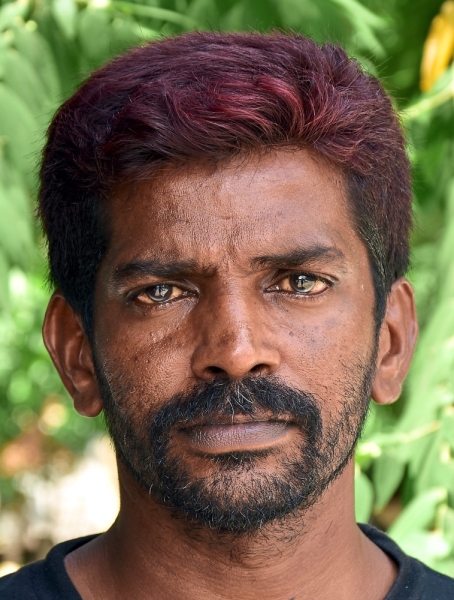 Muhammad Jamal says his sister’s family is having a hard time living in Valencia Apartments.

It is estimated that resurfacing the entire 6.2ha lot would cost RM800,000 while painting the buildings would cost RM100,000.

The committee said it was difficult for them to get financial aid as they are listed as medium-cost and not low-cost.

He added that he was not getting the necessary support from the city council’s enforcement team.

“I need their support to continuously take action against the illegal traders. We need to raid the apartments more often to deter them from coming back,” he added.

Yugarajah is more than willing to work with residents to resolve the issue as well.

“We had a joint enforcement exercise there in October last year against units that had been converted into business premises,” he said.

“We have also taken action under the 2013 Strata Management Act as well as 2015 Strata (maintenance and management) Rules on unit owners for turning their homes into illegal business premises,” he added.