The 11.19ha site marked in the map which is part of the Bukit Cerakah Forest Reserve that the developer had encroached into.

THE Selangor government has issued a stop-work order on ongoing construction works at the Bukit Cerakah Forest Reserve trailhead next to Bukit Bayu in Shah Alam.

Selangor Forestry Department (JPNS) visited the site and confirmed residents’ concerns that a developer had encroached into parts of the forest reserve.

JPNS planning and certification senior assistant director Raffae Ahmad said the encroachment was into a 11.19ha site, and the affected area has since been sealed off.

“The developer cannot encroach into the forest reserve area but it did so and action has to be taken.

“We will take stern action on this matter but we will also need to find out what happened during the approval stages,” he said, adding that the developer had shown its submissions which were approved by Shah Alam City Council (MBSA), including the land in question.

Hee said he would set a meeting with the Selangor Land and Mines Department, JPNS, MBSA and all relevant agencies to identify how the planning approval was issued. The land near the Bukit Bayu residential area being cleared for development.

He also asked JPNS to note down the number of trees felled by the contractors.

“We have to charge the developer for every tree that was felled here (forest reserve area).

“The developer will have to pay 10 times the market rate for every tree felled, according to the type of species,” he said.

The developer can also be fined up to a maximum of RM500,000 or jailed five years.

Last year, Bukit Bayu residents raised the issue with Najwan after noticing contractors moving into the forest area via an entrance next to their neighbourhood.Its residents association also sent a letter to Mentri Besar Amirudin Shari, appealing to the state and local authorities to issue immediate stop-work orders for all development activities in the forest area around Section U10, identify land ownership status and land use requirements, and ensure that an Environmental Impact Assessment report was provided.

Other signatories to the letter are the Malaysian Nature Society (MNS), Treat Every Environment Special (TrEES), and Global Environment Centre (GEC). 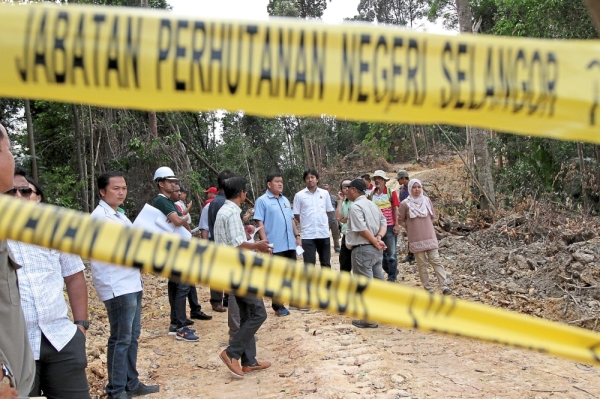 Hee (in blue) at the encroached site that has been sealed off by the Selangor Forestry Department.

The groups also urged that a thorough study on flora, fauna and habitat preservation be conducted besides drafting a nature management plan.“Back then we did not know who owned which part of the land but after receiving the full details from JPNS, we can fully determine that the developer has indeed encroached into the forest reserve,” said Najwan.

He added that there was no objection on the ongoing development taking place on private land.

“It is okay if the forest reserve was not encroached into.

“The forest is a symbolic spot for us in Selangor, especially in Shah Alam, where there aren’t many spots like this left,” he said.

Hee also took a drive up the encroached area leading to Bukit Sapu Tangan, a trail within the Shah Alam National Botanical Garden, to assess the situation better.

He informed JPNS officers to conduct repair works on the observation tower on the trail which was damaged and left unattended.

After spending an hour at the site, the group visited the adjacent Shah Alam Community Forest where residents also protested on ongoing construction works encroaching the boundary of the community forest. 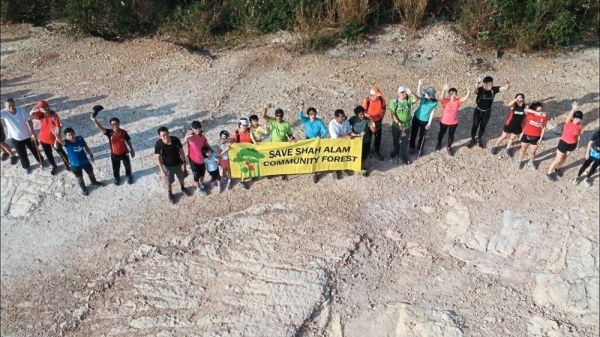 The Shah Alam Community Forest group formed a human chain last weekend to create awareness for the community trail which they have been visiting since 2014.

However, Hee said there was nothing wrong here as the community forest was not located within the Bukit Cerakah Forest Reserve area.

“If you refer to the map, the construction is far from the forest reserve so we don’t see anything wrong here.

“The residents may have misunderstood. They thought we had allowed development to take place at the forest reserve which is not true,” he said after driving through the construction site.

He said the Shah Alam Community Forest (SACF) area was “normal forest” area and parts of it were privately owned by individuals. “Bukit Cerakah is a huge area, and the previous government sold it to different people and they now each have land titles of their own,” he said, adding that the state government could not stop developments on land that it did not own.

However, residents want the state to continue preserving what is left of the community forest although it is not part of the Bukit Cerakah Forest Reserve.

The SACF forest land ownership is divided into two parts – state land with no use at approximately 52.61ha and Selangor State Development Corporation (PKNS) owned land of 109.27ha earmarked for residential development.

“We hope the state government will gazette the 52.61ha site for ecological, educational and recreational purposes.

“There are not many places left with such pristine forests, especially in a growing city like Shah Alam,” said SACF society secretary Alicia Teoh.

Last weekend, SACF held a human chain event as an act of solidarity to save the unprotected SACF located beside Setia Ecopark in Setia Alam, a community trail they have been visiting since 2014.

In December last year, SACF started an online petition addressed to the Selangor Mentri Besar to save the forest. A total of 50,000 people signed the petition.

A month later, the group together with Pertubuhan Pelindung Khazanah Alam (Peka) Malaysia organised a “Save SACF Trees” campaign where volunteers tied “Save Me” cards around 80 trees in the forest.