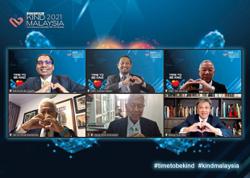 Dr Ramasamy (third left) receiving his biography book from Chow after the launchingceremony at the Light Hotel Penang in Seberang Jaya, Butterworth.

LAWMAKER Dr P. Ramasamy, who rose from being a university professor to Penang’s Deputy Chief Minister II, has a biography written on his political journey.

The 180-page Tamil book titled, Paakumara Teevil Tekumara Thalaivan (Teak Tree Leader on the Isle of Betel Nut Trees) chronicles his achievements as well as social and political contributions to the nation.

The hardcover book, with 22 chapters, is written by S. Gunalan, a journalist with Tamil daily, Makkal Osai.

The contents include Dr Ramasamy’s exposure of the Selancar Empat slave labour camp issue, his involvement in the World Tamil Conference as well as his role as a peace talk negotiator between the Liberation Tigers of Tamil Eelam of Sri Lanka and the Sri Lankan government.

The 70-year-old Penang DAP vice-chairman’s role in establishing kindergarteneducation in Tamil schools as well as introducing the golden chariot at Penang Thaipusam is also featured together withhis contributions to the Penang Hindu Endowment Board.

Chief Minister Chow Kon Yeow congratulated Gunalan for conducting interviews and carefully selecting materials on Dr Ramasamy, including observing him asone who did not give up easily in the faceof challenge.

“I believe this biography of Dr Ramasamy will inspire the younger generation to boldly step forward and serve Malaysians selflessly especially those in the marginalised segments,” added Chow.

Dr Ramasamy, in his speech, thanked Gunalan for writing the book.

“Though Gunalan has praised me in the entire book, I must admit that there are weaknesses in me as I am an ordinary human being.

“I have lots more to do for the community and as such, I need the support of everyone,” he said.

Over 500 guests and well-wishers attended the ceremony. 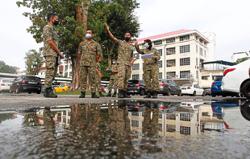