Swept up in Yuletide spirit

However, the organisers were well-prepared for the rainy weather and put up a canopy that could fit the hundreds who showed up for the annual celebration held on the Penang mainland this year.

Unperturbed by the rain, guests revelled in the festivities, watching the exciting stage performances and tucking into the delicious spread of briyani rice, curry and other delicacies.

Keeping the festive spirit alive at the event themed ‘Jesus, God’s Gift to the World’ was singer Joseph Pragasam and band members from the Church of the Risen Christ, Ayer Itam.

This was followed by a cultural dance fusion to the catchy Tamil praise song ‘Boomiyin Rajave’ and ‘Jingle Bells’ in Mandarin by Indian youths from Gereja Rivers of Water, Bukit Mertajam. Members of St Anne’s Church later performed a thought-provoking skit in Mandarin, relating how people easily got caught up with the commercial aspect of Christmas and forget about Jesus Christ’s birth.

Next, 40 orang asli youths between 10 and 20 years old from DOA Service Centre in Tasik Temenggor, Perak, mesmerised the crowd with their lively dance songs in English, Malay and a few tribal languages.

Soon, a group of 40 Indonesian girls dressed in colourful batik outfits filled the stage and area below as they harmonised well in an a capella Indonesian song and fast English number.

The girls, who are from Gereja Keluarga Tabgha, later returned on stage to dance to more upbeat songs belted out by Pragasam. They got the crowd on their feet to dance and sing along. 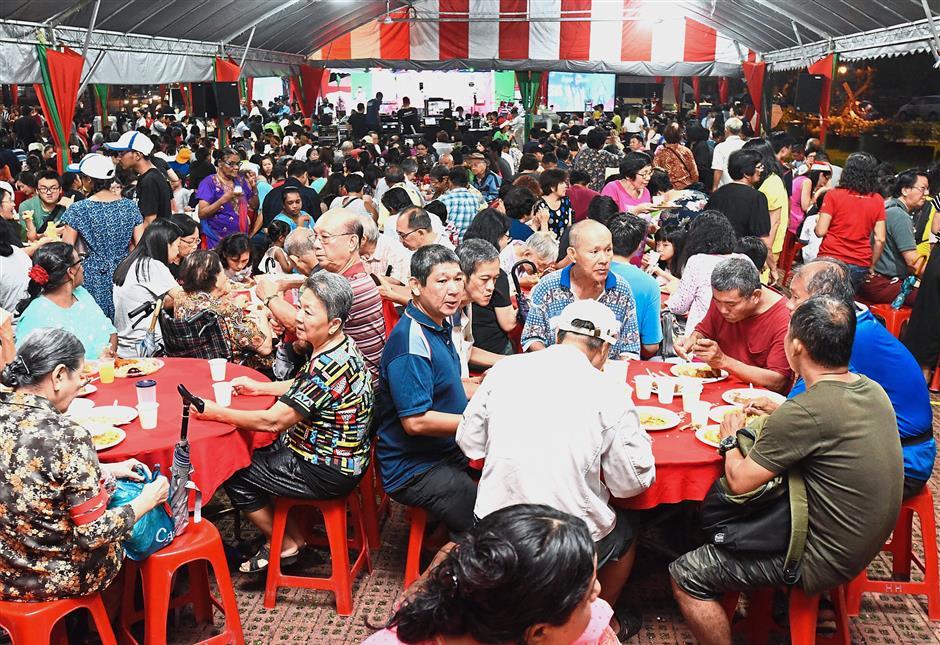 Guests enjoying the food at the state open house.

Italian visitor Glauco Venuti, who oversees the South-East Asian branch of the Focolare Movement for men based in Bangkok, said this was his first time attending the state Christmas open house.

“It is a beautiful show of unity in diversity, with each ethnic group displaying their uniqueness,” he said.

“We need such events to further promote the spirit of peace in the country,” she said.

Chow said in his speech that many people failed to realise the importance of having peace in their lives.

“Once we have peace in our hearts, we can have peace with ourselves and with God. Then, we can live in peace with all the people around us,” he said.

Chong Eng said the state government gave an allocation of RM110,000 for the event which was organised by the Christian Federation of Malaysia (CFM) Penang chapter.