KOTA KINABALU: A retired Malaysian-born engineer is offering Sabah to help set up a pangolin sanctuary as a steps towards conserving the fast diminishing mammal.

Peter Chan, who has been working in the United States for the past 30 years, made the offer to Deputy Chief Minister Datuk Christina Liew during a recent courtesy call.

Chan said that in his retirement he wanted to work for nature conservation and was ready to provide the funding through his US based Pangolin Conservation Initiative.

Liew, who is state Tourism, Culture and Environment Minister, said pangolins are a protected species and such an effort would mark an important conservation milestone in Sabah.

“I believe a pangolin sanctuary, if it materialises, will be the first of its kind in South East Asia,” she said, adding that the the move is timely as pangolins are highly poached in this part of the region.

“It is a good proposal which will generate immense interest among nature lovers and conservationists. I am excited about this laudable cause. We thank Chan for his initiative and unprecedented proposal,” he said. A pangolin being fitted with a GPS tag by Elisa before it was released back in the wild.

Liew said that Sabah’s pangolin expert, Elisa Panjang, will be working on the proposal paper. Elisa is a well-known pangolin biologist.

“A working paper on the proposed sanctuary will be presented to the ministry by the end on November who will study it from all aspects before the proposal is forwarded to the state government for consideration,” she said.

Liew said that emphasis is to continue to create public awareness on the conservation of pangolins, often described as a secretive, rare and unique mammal. The rescued pangolin was fitted with a GPS tag before being released to the wild.

“That’s how I found out about Elisa. I think with her expertise, she can run the programme. It can be a kind of public-private partnership and ideally to be managed by the Sabah Wildlife Department (SWD). As far as I am concerned, I want to do something good for Sabah and there is no financial gain.

“Let’s work together to achieve this goal. I don’t want this thing to fail. That’s why I am here. Other concerned Malaysians’ who can help to attain this goal will be welcomed. Once we get this project running, the next step is to secure corporate sponsorship to make it financially sustainable. That is the right way to do it,” he said.

The sunda pangolin, with an estimated 1,000 left, is found throughout Sabah but mainly concentrated in the pristine forests in Kinabatangan and Danum area.

The pangolin population is severely threatened by poaching for the international illegal wildlife trade and is sold for its meat as exotic food. Its scales are used for traditional medicine while the skin is used to make accessories.

Last week a member of the public surrendered a pangolin weighing 12kg to the Wildlife Department. It has since been released back into the forest. 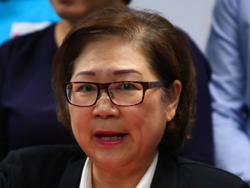