School spirit comes back to life

HEAVY downpour did not dampen spirits for old boys of Assumption School Butterworth, who came from near and far for their alma mater’s 85th anniversary celebrations.

A total of 191 old boys as well as 23 former teachers and ex-staff members showed up at The Light Hotel Penang in Seberang Jaya for the event, organised by Assumption Butterworth Alumni Association (ABAA).

The hall was filled with boisterous banter and merriment as they chatted over dinner reminiscing the good old days and exchanging stories on the latest developments in their lives.

ABAA chairman Vernon Christopher Fernandez said the reunion was a great time for the old boys to come together to rekindle the fire, spirit and hopes of their wonder years.

“Forget not our past, treasure our friendship and cherish the days and moments we have now. Our aim is to achieve the support for our alma mater and to contribute to individuals, society and the nation,” he said. 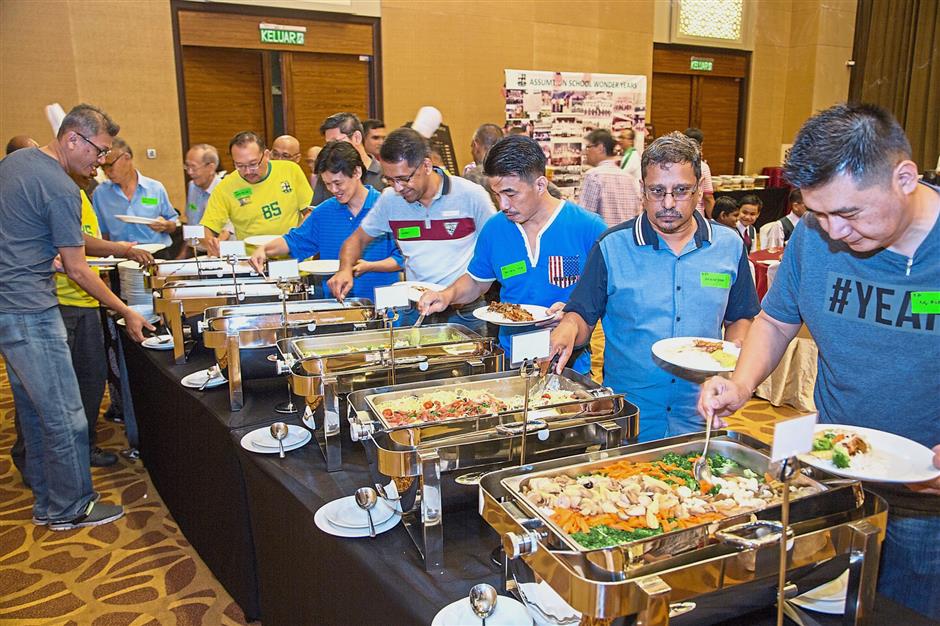 Guests helping themselves to the buffet spread at the dinner.

He added that the event was also a show of appreciation to all ex-teachers for their passion and dedication towards their students’ education and extra-curricular activities.

It was followed with a cake-cutting ceremony by former teachers and ex-staff members, before a photo session.

Francis Tan, 71, the oldest student representing Batch 1955 was honoured with a special gift, while the boys of Batch 1965 got former teacher William Gomez to cut a cake to celebrate their 60th birthday.

The highlight of the evening was a special rendition by former music teacher Daisy Chua, 81, who delivered a Bing Crosby song, You Belong To My Heart much to the delight of the audience.

Francis Heng, 79, said he served the school for 21 years from 1961 before retiring as senior assistant in a Chinese primary school in 1994.

“I remember starting a welfare fund to help needy pupils by subsidising their school fees, shoes and stationery. I am glad I played a little part in their formative years.

“I strongly urge all to keep the spirit of Assumption alive and pass on this legacy to the generations to come,” he said.

Lim Eng Hai, from Batch 1968, who is now settled in Singapore, said he flew in for the event to meet up with ex-schoolmates whom he hadn’t seen since the 70s.

“It was a fun yet heartwarming night when we let down whatever hair we have left and simply enjoyed the feeling of being boys again. Batch 1976 schoolmates posing in a cheery mood at the dinner at The Light Hotel, Seberang Jaya.

“Our favourite haunts included an abandoned building next to the school which we thought was haunted. We’d go there to try to scare the wits out of each other.

“There was also a train depot and the railway tracks with a bridge over a river that provided us with the amusement of exploration and adventure,” he said.

Also flying in from Singapore was Foo Kok Kim from Batch 1976, who said his batch members would have regular meet ups every year.

“It is simply amazing seeing the smiling faces and the flashback photos on display at the back of the hall.

“I enjoyed playing football, playing under the pine trees outside the classroom and watching old movies shown via a film projector on a silk screen back in the day,” he said.

N. Krishnasamy, from Batch 1985, said many of his batch mates bought and wore the commemorative 85th anniversary T-shirts as ‘85 also represented their batch year.

“We wanted to show others that we are proud of our alma mater,” he said.

His batch mate Fazriani Amran from Melaka said: “We were laughing so hard sharing stories from our school days. Those classic moments never fail to amuse and keep us together.”

Assumption Primary School, which stood on Jalan Assumption in Bagan Dalam on mainland Penang, was established as a branch of the De La Salle Brothers’ school in 1933.

Its secondary school, which had classes for Form 1 till Form Three, ceased operations after fire gutted the building in 1995.

The primary school building made way for condo blocks at the present Harbour Place in 1997.

After operating from SK Sg Nyior for about 10 years, SK Assumption relocated to its present three-storey building beside SK Kuala Perai in Jalan Bagan Dalam in March 2008.