A filepic of senior citizens collecting their BR1M at a community hall in Ipoh.

THE elderly in Ipoh are disappointed that the Bantuan Rakyat 1Malaysia (BR1M), now known as Bantuan Sara Hidup, will be gradually phased out and ultimately stopped.

The senior citizens are urging Prime Minister Tun Dr Mahathir Mohamad to reconsider his decision as they still require the financial assistance.

A housewife named Lim said the Government should continue the BR1M handout, but only to retirees and the elderly.

“Stop giving it to the young people who are working and those who can take up part-time jobs.

“Not all elderly people in the country can still work long hours like our Prime Minister,” Lim said.

She added that many BR1M recipients took the handouts for granted and could become lazy, thinking that the Government would always support them.

“Some will just spend all the money, but to the elderly, the money is still very important and will allow them to save for rainy days,” said Lim who is in her 60s.

The Sunday Star reported on Aug 26 that Dr Mahathir said the cash handouts would be gradually reduced before being stopped.

BR1M was introduced in 2012 and its handout amount increased annually except for last year. 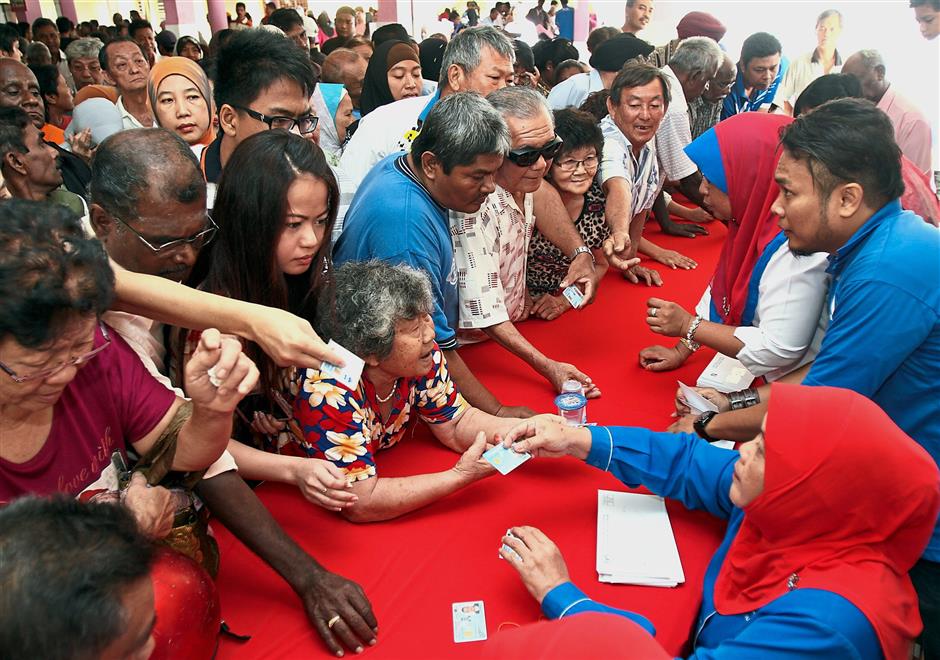 A filepic of senior citizens collecting their BR1M at a community hall in Ipoh.

Single individuals earning RM2,000 and below get RM450.

RM6.8bil was allocated in this year’s budget.

Former hawker Mohd Salleh, in his 70s, was also unhappy with the Government’s decision.

The father of three and grandfather of seven said the BR1M aid helped him a lot.

“I have stopped working and my children have their own families to fend for.

“The money may not be much to some people, but it has helped me with my daily living expenses.

“I always try to be thrifty but the cost of items is so expensive nowadays,” Mohd Salleh said, adding that he hopes the Government would look out for the poor and elderly.

“I understand that the Government wants to cut down on its expenses but they must also think of the people who need help.

“Maybe they can look into providing elderly folk discount cards to buy groceries.

“I read that the Perak Government wants to start a medical and food card for the needy and hope it will be implemented soon,” he said.

“It will be great if they continue to give out (BR1M), but if they do not, it is fine too.

“Some of my friends look forward to getting the handouts, but they will spend all the money quickly.

“The Government should give out BR1M to those who are no longer working and do not have any source of income,” said the retiree and grandfather of eight.

Chew said the Government should continue to look into lowering the cost of living.

“Eating out now is so expensive, even in Ipoh. If they stop BR1M, there should be policies in place to not burden the elderly and poor.

“Perhaps they could offer free public transport to senior citizens,” he added.

“They talked about how they will have a tough time in the future (without the BR1M handout).

He added that many people still relied on the handout, especially the needy and hardcore poor.

“I think it will lead to more social problems if they stop giving out BR1M.

“It should only be given to the needy but not stopped completely,” he said.

Mohd Rawi said an alternative would be to increase the amount of welfare aid being disbursed monthly.

“I think this is the least the Government could do for the elderly.

“Some retired senior citizens with no source of income and no children get RM350 a month, so how can they survive with that amount if you cut off the handout?” he asked.