(Back) Leon, Chow and Ewe looking on as the master Chinese calligrapher creates a scroll at the dinner.

THE China-Malaysia Youth Exchange Programme in Penang gave talents from both countries an international platform to shine.

Held over five days, it brought together 32 local youngsters from primary and secondary school levels, with 60 of their Chinese counterparts.

They indulged in a series of music, arts and dance exchanges, capped off with a gala dinner held at the grand ballroom of The Top@Komtar.

It was sponsored by City of Dreams (COD) of Ewein Berhad, whose group managing director Datuk Ewe Swee Kheng was among the 500 guests in attendance.

As the guests feasted on a sumptuous multi-course Chinese dinner, the students kept them entertained with a lineup of vibrant performances. Malaysian students entertaining the crowd with a sprightly routine of their own. — Photos: Jeremy Tan/The Star

A Chinese calligraphy master then exhibited his deft brush skills, creating two scrolls on the spot as an eager crowd gathered to snap photos.

These were then presented to Ewe and also Leon Lee – the CEO of Zeon Properties Sdn Bhd, COD’s exclusive marketer and also event co-sponsor.

Lee, who was also the dinner’s organising chairman, said the transnational exchange programme was aimed at channelling youthful inspiration, energy and passions.

Such activities, he believes, would not only have a life-changing impact on every participant, but also create an innovative, gregarious and sociable generation.

“As Nelson Mandela once said, the youth of today are the leaders of tomorrow.

“Therefore it is very important to promote such exchanges because almost every­thing that is great, has been done by youth,” he added in his speech.

Lee also gave a presentation on Penang’s charms and tourist attractions, for the benefit of Chinese guests who were in attendance. 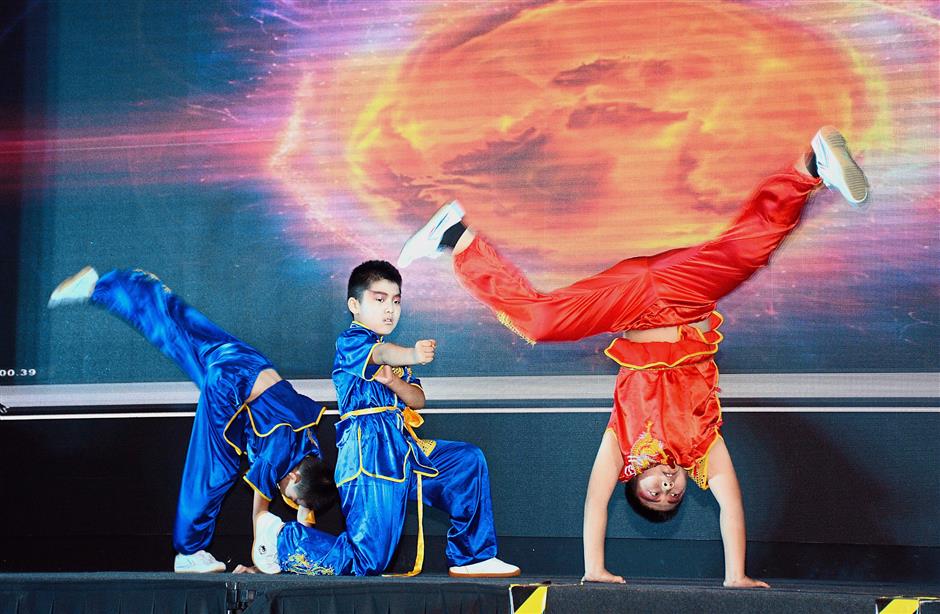 Young wushu exponents showing off their skills on stage.

Among those present at the recent dinner were the Consul-General of China in Penang, Lu Shiwei, and deputy Consul-General, Leng Xiaoming.

On the tourism sector, Chow said Penang has become one of Chinese tourists’ top destinations, with many wanting to come here due to its rich cultural attractions.

The exchange programme was organised by Nine Provinces.

Chinese students who wanted to participate first had to qualify via a show held in Beijing.

Besides the activities in Penang, the group also visited Ipoh, Kuala Lumpur and Putrajaya.