Group prepares 100,000 packets of meals for the less fortunate

Sunway volunteers from various business divisions around Penang packing the meals during the ‘Rise Against Hunger’ event at Sunway Hotel Seberang Jaya on the Penang mainland. — Photos: MUSTAFA AHMAD/The Star

THEY were not complaining even though they had to work eight hours non-stop at the Sri Cengal Ballroom in Sunway Hotel, Seberang Jaya.

It was a noble cause as the volunteers were taking part in the ‘Rise Against Hunger’ meal packing charity event to prepare 100,000 packets of meals for the less fortunate.

“Today’s event is the final of the five-part #sunwayforgood Rise Against Hunger meal packing initiative, which aims to end the hunger of the poor and less fortunate.

“The event also marks the achievement of Sunway Group’s one million meals packed milestone since the initiative started in 2014,” he added. Ahila said the initiative was in line with Sunway Group’s aim to drive the UN Sustainable Development Goals in the region.

“Hunger is the common thread among the world’s most challenging issues.

“Targetting hunger is fundamental to supporting other causes including health, education and the welfare of women and children,” she said.

Sunway Hotel general manager K. Prakash expressed his gratitude to all volunteers involved in the initiative.

“We at Sunway are committed in contributing to the UN Sustainable Development Goals.

“A total of 250,000 meal packets will be distributed around the most poverty-stricken communities in Malaysia, 100,000 packets to the shelters and orphanages in Cambodia and the remaining 150,000 packets to the refugee community in Timor Leste,” he said. 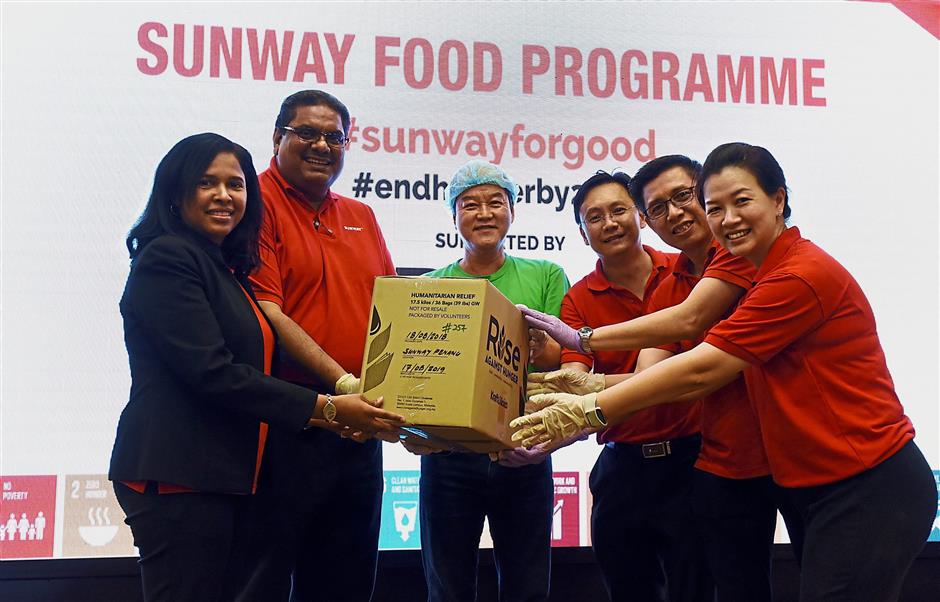