AFTER an intense debate on state matters at the Penang State Assembly hall, break time is often eagerly awaited by many lawmakers, government officials and media representatives to recharge themselves.

The delectable meals served often unite them over friendly banter, even though some of the assemblymen may have earlier locked horns in heated exchanges in the hall.

To ensure that the VIPs are not served with similar items for breakfast, lunch, tea and dinner, caterer Jamal Sh Hassan Sulaiman Damanhoori draws up a special menu for the sitting’s entire duration.

“Though the job is rather hectic, it is equally exciting to come up with different dishes for the daily menu. Our day starts at 6am and ends around 11pm. Jamal (in white) serving a plate of papadom to Law who is sharing a table with (from right) Yeoh Soon Hin and Datuk Abdul Malik Abul Kassim during lunch.

“The more popular dishes are nasi lemak, char koay teow and laksa. Our prawn sambal dish is also a hit,” said Jamal, 60, whose Umi Sekha Catering company has been providing meals for the state assembly since 2010.

To help him prepare food for 400 persons a day, he has with him 12 service and kitchen assistants.

He has also outsourced the preparation of several teatime cakes, snacks and delicacies to a few friends.

“We usually find the best hawkers to serve tasty desserts,” he said, adding that coffee and tea are also served throughout the day.

Beef is strictly off the menu, out of respect for Hindus attending the assembly, while chicken is often the main choice and is prepared in different styles, according to him.

“We also experiment with different drinks and dishes for variety.

“This time, we made our own concoction of non-alcoholic sparkling drink. For the next assembly sitting, we hope to prepare a few Chinese dishes.

“So far, the response has been good and we have received positive feedback,” he said.

Jamal said he took over the catering business 10 years ago from his mother who had run it single-handedly since 1969.

Bertam assemblyman Khaliq Mehtab Mohd Ishaq, a first-timer at the state assembly, heaped praises on the caterer for the variety of dishes served every day.

“I am amazed as the caterer does not repeat the dishes. And, the meals served are beyond my expectations.

“Now, I look forward to the dishes they would serve next,” he said.

“I regularly seek feedback from the assemblymen as well as reporters covering the sittings.

“We try to accommodate everyone and make sure there is a variety.

“We want the caterer to provide the best as the state assembly sitting is held only twice a year,” he said.

Law also noted that officers from the state Health Department would check on the food quality before the meals were served. 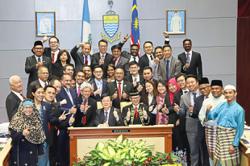 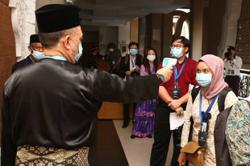