Guests viewing images displayed at the ‘Over Penang’ exhibition.

IF there’s one word to describe the ‘Over Penang’ exhibition by David S.T. Loh, it would be ‘amazing’.

The official opening on Sunday saw invited guests, family and friends from Singapore, Kuala Lumpur, Sarawak and Penang being captivated by the breathtaking images of the state’s contemporary side.

Loh, a Penangite who left the island 30 years ago, has surely returned with a renewed perspective of the state.

Based in Penang since November 2017, he has been exploring the Pearl of the Orient with a revived passion, discovering new and interesting things to see and photograph on land or from above.

He also has a keen eye for details and balance, thanks to his former position as a photojournalist for Reuters, The Star and currently The Malaysian Insight. 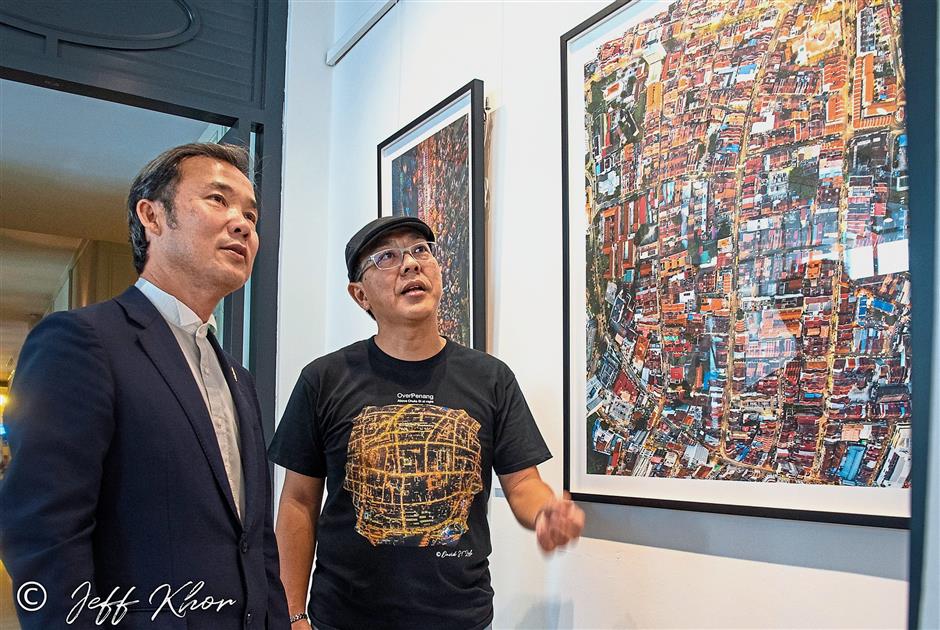 Loh (right) briefing Yew on one of the exhibits of his ‘Over Penang’ showcase at the E&O Hotel.

“Penang is such an amazing place where there seems to be non-stop events, things to do, and places to go.

“If you are prepared to go out and look, you will never be bored in Penang.

“I am constantly told I am showing people images of a side of Penang that they never knew existed,” he said. Loh giving a talk to guests during a private viewing of the exhibition at the E&O Hotel.

Loh said he continuously documents Penang’s attempt to balance progress and preservation as he senses a fresh feel of how the city has changed in tandem with maintaining its essence in combining heritage and progress.

“I also use a drone to scour places that might hold interesting terrain, landmarks and features. Loh taking a creative selfie while being surrounded by pictures of Penang for the exhibition.

“So far, I have not been disappointed with every deployment of the drone,” he said.

These aerial images will be part of a curated collection for the exhibition in conjunction with the George Town Festival 2018.

The ‘Over Penang’ exhibition is being held at the E&O Hotel until Sept 2.