A poster on the show.

The first stop is at the Performing Arts Centre of Penang (Penangpac) in Straits Quay, with shows at 8.30pm today and tomorrow.

Joanne’s unique brand of comedy storytelling, underscored by complex writing and wit, would not only entertain audiences but also take them up close and personal.

She will share stories of her whirlwind journey as an animated child who grew up and went on to become the country’s longest running stand-up comedian in the 90-minute shows presented by LOL Events.

The struggles, accomplishments and achievements of her nomadic life’s journey from Ipoh to Penang, Johor and eventually Kuala Lumpur, are painted in different shades of humour.

From her first entry into the dimly lit backstages of Haw Par Villa, to the blinding lights in Boom Boom Room and later the empowering Super Kam comedy series, it gives audiences an insight into how a feisty, determined individual became the country’s comedy sweetheart. 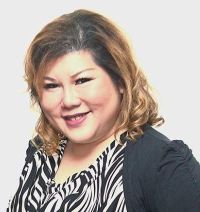 Kam will be entertaining audiences in Penang this weekend.

“This is different from the rest of my stand up comedy shows because it is more biographical, telling the story about my childhood and my life.

“The jokes are about my parents, life in secondary school, personal relationships as well as my unexpected pregnancy.

“It’s seeing the funny side of life’s challenges. Audiences will be able to relate,” she said.

Joanne is no stranger to audiences in the northern state, having done the well-received Super Kam & Romantic Fools previously. And the affection is mutual.

“I love Penang audiences, they are always great. Having grown up here before moving away at the age of six, it feels like I’m coming home every time.

“It’s one of my favourite places to perform,” the comedian revealed.

Her longevity in the industry – 26 years – owes much to her ability to constantly come up with new punchlines. She draws on her life experiences and then relays it into a story.

“Jokes are not like songs that people want to hear over and over again.

They may go see a singer and listen to that familiar tune, but for comedians, crowds always expect new stuff – without realising it takes a few years to perfect the joke,” Joanne said.

The shows in Penang are part of the George Town Festival 2018.

After that, there will be shows at the Chemsain Auditorium in Kuching, Sarawak, on Aug 24, and the JKKN Auditorium in Kota Kinabalu, Sabah, on Aug 26. Both start at 8pm.

Next up is Johor Baru, with a show slated for 8pm on Sept 18 at the Puteri Pacific Hotel’s Permata Ballroom. It wraps up with sessions at the PJ Live Arts centre in the Klang Valley on Aug 26 and 27, both at 8.30pm. For tickets at these four locations, visit Tix.my.

The Joanne Kam: La La Lian Nationwide Tour is partnered by Enrich by Malaysia Airlines – the Official Airline Loyalty Partner. Enrich members will be able to enjoy discounts when they purchase tickets to the shows (terms and conditions apply).

For more details on the show, visit www.lolevents.my or www.facebook.com/LOLEventsMY.