(From right) Devadass, Mariappan and Rajendran at the taxi lane, which does not have a barrier to separate the taxis from other vehicles.

TAXI drivers in Klang are appealing to Klang Municipal Council (MPK) for a permanent base at the former North Klang bus terminal.

K. Mariappan, who has been a taxi driver for some 20 years, said he and his fellow taxi drivers operated under a makeshift tent and it did not offer a good impression to the passengers.

“There is no proper base where we can rest while waiting for passengers.

“We have to run for cover when it rains as the tent is not good enough to provide us shelter,” he said.

Mariappan added that the drivers who operated across Plaza MPK near the old North Klang bus terminal were members of the Klang and Selangor Coast Rental Taxi Owners and Drivers Association.

The taxi drivers claim pirate taxis were another bane, as the illegal drivers often pinched passengers from them and this was affecting their livelihood. 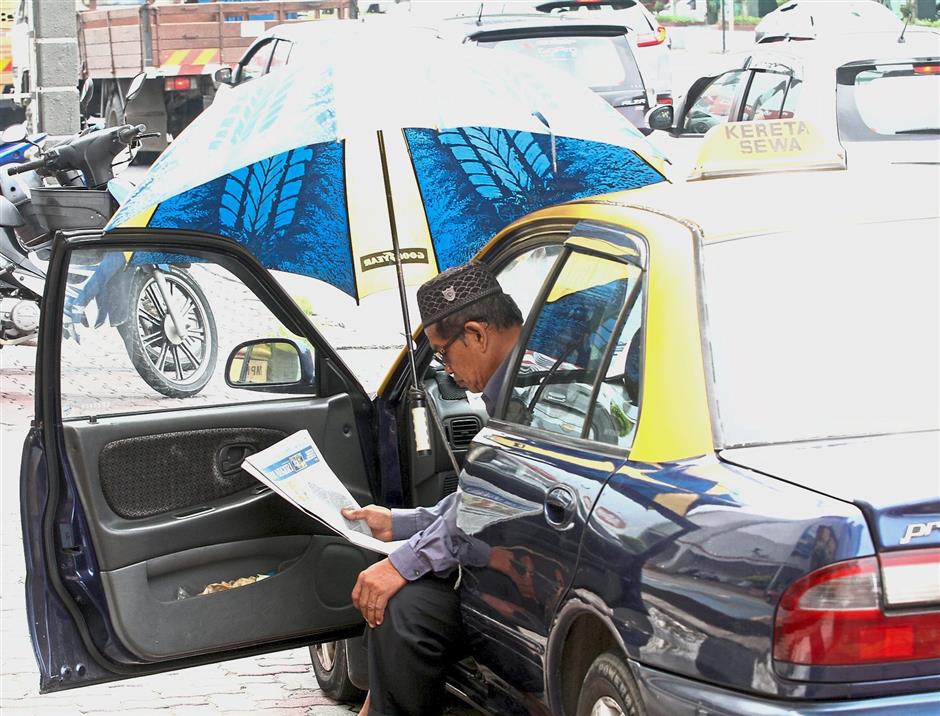 A taxi driver takes shelter inside his vehicle under an umbrella as there is no permanent base for drivers to rest.

Abdul Karim, who has been a taxi driver for 14 years, said the illegal drivers undercut the legal taxis by offering cheaper fare to potential customers.

“We have already been badly hit by the current economy and these illegal taxis are making life even more difficult for us licensed taxi drivers.

“This is our full-time job, we have no other income,” added the 57-year-old.

S. Rajendran, 49, said it was bad enough that they had lost customers to ride-hailing apps, now they had to deal with illegal taxis stealing customers from right under their noses.

“We can hardly earn RM50 per day and have to depend on passengers who are seeking long-distance ride for our survival,” he said, adding that the authorities must step in so that genuine taxi drivers would not be forced out of a job.

Taxi drivers in Klang want a permanent base as they currently have a makeshift tent (right) where they rest while waiting for passengers. — Photos: AZLINA ABDULLAH/The Star.

He also highlighted the need for a demarcated taxi lane along Jalan Pos, hoping the council would build a permanent divider to separate regular private vehicles from the taxis.

“Currently, there is no solid barrier to divide the taxi lane from the rest of the road, so vehicles are often parked indiscriminately where the taxis usually queue up for passengers.

“I raised the taxi drivers’ complaints on lack of infrastructure to MPK and hope the council will be quick in acting on the matter,” he added.