Chow (third right) being briefed on the programming class for kids by Kee (second right) at the Penang Digital Library. With them is Bharathi (right). — George Cheah/The Star

IT was a thrill for 30 children to learn about basic coding at the Penang Digital Library in Jalan Mesjid Negri.

During the two-hour programme, the kids, aged between seven and 15, from the Padang Kota constituency were seen keenly taking part in the activity which required them to issue instructional commands to get to the next level on the laptop computers.

They were selected to take part in the trial initiative called ‘Kids Can Code’, conducted by Telebort Technologies Sdn Bhd.

Telebort Technologies executive director Kee Chong Wei, who was leading the lesson, said the programming lessons would allow the participants to become creators instead of mere consumers to meet the demands of Industry 4.0.

“We want to make sure the younger generation are able to catch up with the rapidly growing new industrial revolution and technology advancements.

“They will gain core computational thinking skills such as decomposition, pattern recognition, abstraction, Algorithms, Mathematics and logical thinking,” he said during the class recently.

Kee said the trial programme was to expose the kids to coding before they can join the after-school programme featuring three core programmes, each with 16 lessons.

He added that the core programmes would be more advanced with an introduction to creative computing, mobile app development and web designing.

For details and to register, visit https://www.telebort.com/pdl 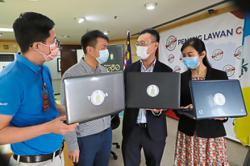