By VINCENT TAN and MARTIN CARVALHO

Comm Zulkifli (front, in green) and his convoy of 50 bikers being greeted upon their arrival at Batu Pahat.

BATU PAHAT: The town’s old business district buzzed with the sound of motorcycle engines as the Police Heritage Trust Fund convoy rolled in.

In his opening speech, ACP Abdul Wahib expressed his pride that the convoy had chose to stop at Batu Pahat.

The police district headquarters had also passed the hat around, raising a total of RM7,100 for the trust fund, he added.

There are 427 retired police officers in Batu Pahat, he said.

Comm Zulkifli Abdullah in turn, congratulated the district headquarters for their efforts.

“I greatly appreciate the contribution, and I’m sure this will help lighten the load on our retired and former police officers,” said Zulkifli. ASP Nur Hidayah (putting on helmet) and ASP Norhastinarahayu (centre) say they are proud to be part of the convoy and help raise funds for retired police officers.

Female officer ASP Norhastinarahayu Mohd Hashim, currently serving in Bukit Aman, said they were proud to be involved in the motorcycle convoy.

“There are eight women bikers involved in this convoy, and I’m proud in the sense that although we have support from the convoy, it can still go quite fast but we ladies can keep up,” said ASP Norhastinarahayu.

Her colleague, ASP Nur Hidayah Damanhoori said it was an honour to participate in the charity ride to raise funds for retired police officers.

“I feel a responsibility to help the former police officers, when they’re in need and this is one way to assist them,” she explained. 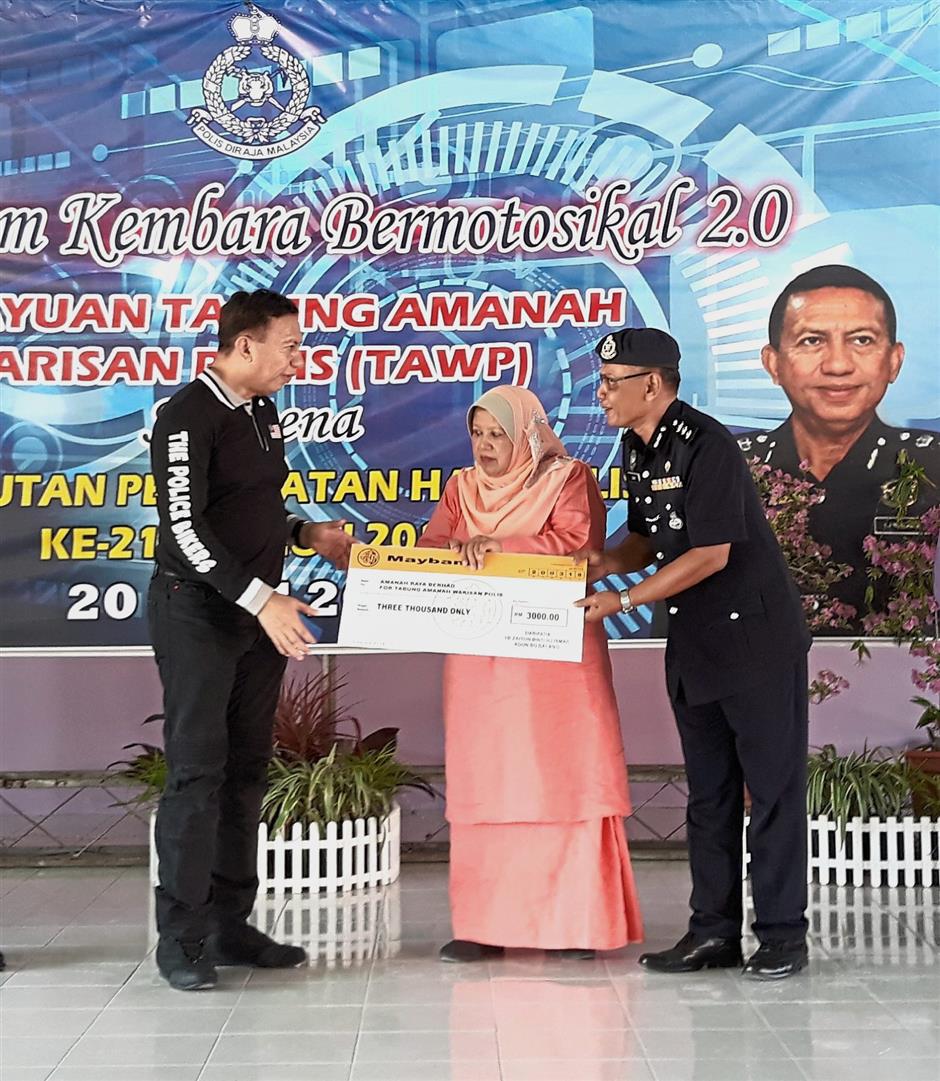 Zaiton (centre) witnessing the handing over of a mock cheque between ACP Zaharudin (right) and Comm Zulkifli during the convoy’s stopover in Sungai Besar.

Kamaruddin Kuik, who retired as an Asst Comm and is now an executive council member of the Johor Retired Policemen Association’s Batu Pahat branch, said it was heartening to see the efforts made by serving police to help their predecessors.

“A lot of the funds are used for the former policemen’s welfare, some face problems with medical costs as they get older, others need mobility aids and we also help with burials,” said Kamaruddin.

They made their first stop at Tangkak before heading to Sungai Balang where they were received by assemblyman Zaiton Ismail at the Kompleks Penghulu Sungai Balang. Also present was Muar OCPD ACP Zaharudin Rasip.

The expedition ended at the state contingent headquarters in Johor Baru on Wednesday afternoon.