Construction to begin: A Taman Permata flats resident and former estate worker looking at the site in Dengkil where her new home will be built. She has been waiting two decades.

FOR the families of 400 former workers of Prang Besar, Galloway, Medengley and Sedgeley estates in Sepang, the dream of owning a home is almost there after seeing the notice board for the People’s Housing Programme in Ampar Tenang, Dengkil erected last month.

They will receive the keys to the single-storey 750sq ft terrace houses with three rooms and two bathrooms in 16 months time.

Facing a tough time since they were asked to move out of their estate quarters to make way for the development of Putrajaya over 20 years ago, the 400 families who were housed at the Taman Permata flats in Dengkil can look forward to brighter days.

It certainly is a relief for them, including 30 families from Block 5 who lived in tents provided by the Sepang Municipal Council (MPS) in June 2013 after the building was declared unsafe for occupation following a sinkhole incident.

While facing the tough and challenging conditions for several years, the residents continued to knock on all doors including those of the Selangor state and Federal governments to address their plight.

After much hue and cry, the residents were finally offered a solution by both parties – the state government provided the land and the Federal government agreed to build homes for the 400 families. Several Taman Permata Block 5 residents were living in tents (on the right) for three years after their flats were declared unsafe by the authorities in June 2013. — ELAN PERUMAL/The Star

A noticeboard at the project site, said Ramadass, indicated that the project, which started on Aug 1 last year, would be completed on July 21 next year.

He added that the project also included the construction of a community hall.

“We are relieved and happy now as our long and painful struggle is coming to an end,” he said.

RA secretary N. Kumaran said the victory came as a result of patience and perseverance on the part of the families who fought for their rights until the end.

He said the struggle was tough all the way as they received a lot of pressure from various quarters, with some going to the extent of belittling their struggle.

“It was not easy as we faced challenges along the way including from certain quarters who tried to sabotage our efforts by spreading lies.

“These people even created lies that the association was giving false hopes to the families by telling them that they will not get permanent homes,” he said, adding that such lies created unrest among the families, especially the older residents. 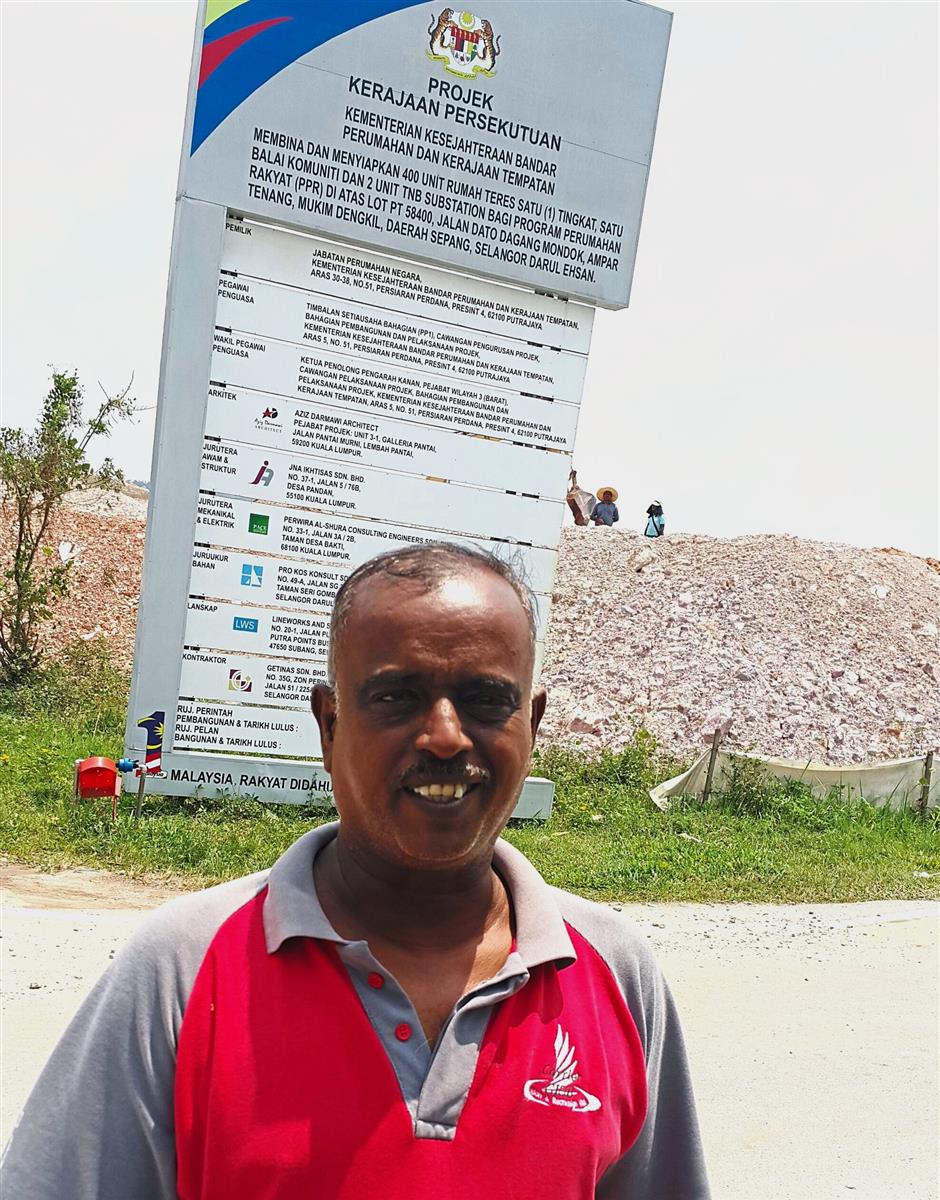 Ramadass in jubilant mood in front of a notice board on the housing project for the former estate workers is under way in Ampar Tenang.

RA adviser S. Arutchelvan was happy that the struggle of the former estate workers was coming to an end.

He said their victory was historical as it was the first time that replacement homes were built for former estate workers after their original homes were found defective.

“Their victory is something that all Malaysians must cherish as the families have overcome numerous tests including their struggle with both the state and Federal governments.

“The state was willing to offer the land on condition that the Federal Government built the houses as they were relocated from their estates by Putrajaya Holdings,” he said

“It was not easy as some of them stayed put in the tent for more than five years to mark their protest for what they thought was a great injustice to them. Finally, it will be a happy ending,” he said.

M. Rajeswari, 42, who was formerly from Prang Besar Estate was looking forward to moving out from her dilapidated flats.

She said the environment around the flats was not conducive for a healthy living.

“We need to provide our children with a spacious environment that is conducive to learning.

“The single-storey house will offer us some comfort compared to the crammed flats with cracked walls,” she said.

Former Sedgeley Estate resident K. Madevi, 72, whose husband died four years ago, lived with her daughter at the flats and cannot wait to move out to her new home.

M. Saraswathy 56, who was among those who stayed in the makeshift tent since 2013 said the news that the permanent homes were being built had brought a lot of joy to her.

“It is long overdue and I am happy that we have finally achieved our goal,” she said

S. Muniandy, 65, from the former Galloway Estate, is looking forward to moving into his new house next year. 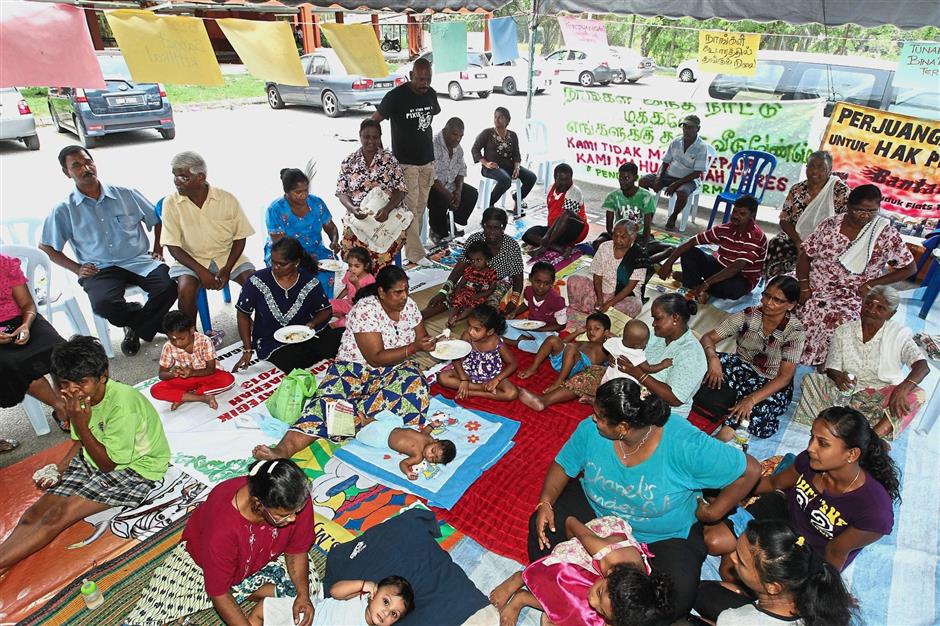 A file photo taken in 2013 showing the Taman Permata flat residents living in a tent after Block 5 was declared unsafe by MPS.

Initially, he said, they were promised terrace houses as replacement for their estate quarters as part of the deal when the estates made way for development.

“However, we were told that the flats were only temporary accommodation and we will be relocated to our permanent houses later.

“In the end, we were forced to endure more than 20 years of hardship before getting permanent homes,” he said, adding that some of the elderly residents had passed on due to old age and illness.

StarMetro published a series of news reports on their predicament and reported on June 23, 2013 under the heading “Tough times for residents” that families were living in makeshift tents when the council declared the flats unsafe for occupation.

Prime Minister Datuk Seri Najib Tun Razak had during the launch of the project last year said the Federal government decided to build the homes costing RM56mil for the 400 families in recognition of their contribution to the country’s economic growth.