An excavator was seen at Taman Rimba Kiara uprooting trees and transplanting them.

TAMAN Tun Dr Ismail (TTDI) residents were shocked to see that an excavator had started uprooting and transplanting trees at Taman Rimba Kiara despite a court hearing that is still pending on the controversial development of the park.

A Save Taman Rimba Kiara Group coordinator spokesman said residents went on site to check on the situation after having been alerted through Facebook and Whatsapp messages.

“The residents were alarmed and highly distressed to discover that works have commence at Taman Rimba Kiara.

"They discover that some trees had been uprooted and had been felled.

“I spoke to the supervisor on-site, and they are uprooting the trees from the upper section and transplanting them to the lower section of the park.

“It appears that trees clearing will continue, and this is just the start of the destruction of the park,” he told StarMetro during a phone interview.

A notice board (pix below) has been put up at Jalan Mohd Fuad, where the existing entrance of the park is located, to inform the public of the coming relocation of the entrance to Taman Rimba Kiara Park. 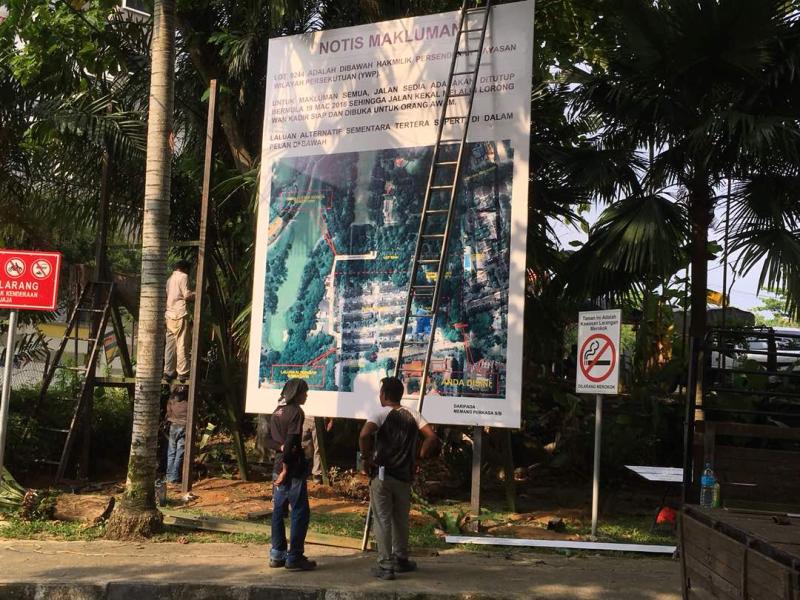 According to the notice board, the existing entrance will be closed on March 19 until an alternative entrance at Lorong Wan Kadir is opened to public.

The board was also accompanied with a map that showed the alternative route.

A notice board on the construction of a block of 30-storey apartment was also erected at the site.

Previously, TTDI residents had protested the proposed housing development that included eight blocks of between 42- and 54-storey high-end serviced apartments, while another 29-storey block comprising 350 units of affordable housing would be allocated to TTDI longhouse residents.

The residents then filed a judicial review application with the High Court to quash the conditional planning permission and a development order granted by Kuala Lumpur City Hall earlier last year.

Several parties then submitted applications to intervene in the judicial review, which caused the case hearing to be postponed.

The application for the stay order was denied by the judge in December last year.

Parties involved in the case have about six weeks to exchange affidavits prior to the case management on April 18, when the date of the case hearing is expected to be fixed.

“The community is highly disappointed at this turn of events as the related parties appear intend to proceed with works even though the current court case has not been completed,” the spokesman added.

TTDI Residents Association is not reachable for comments at press time.