Construction machinery has been brought in to help with the demolition works.

He said MHA planned to being the demolition works after Chinese New Year.

“We began the tender process in January and the work was supposed to start after the holidays," he explained.

Ismail said everything was on schedule and the work was expected to be completed by the end of March.

He also dismissed rumours alleging that the demolition was sped up following the second accident that claimed another two lives on Monday night.

Ismail's comment was corroborated by a statement sent to the media from highway concessionaire Plus Malaysia Bhd.

In the statement, Plus highway managing director Datuk Azman Ismail said the work will done in stages and had already begun in January, with the relocation of toll equipment, signage as well as other assets.

He said this was carried out from Jan 22 to Feb 8.

“Now, we have begun road diversions and are bringing in the necessary demolition equip. Traffic management and lane closures began yesterday,” he added. 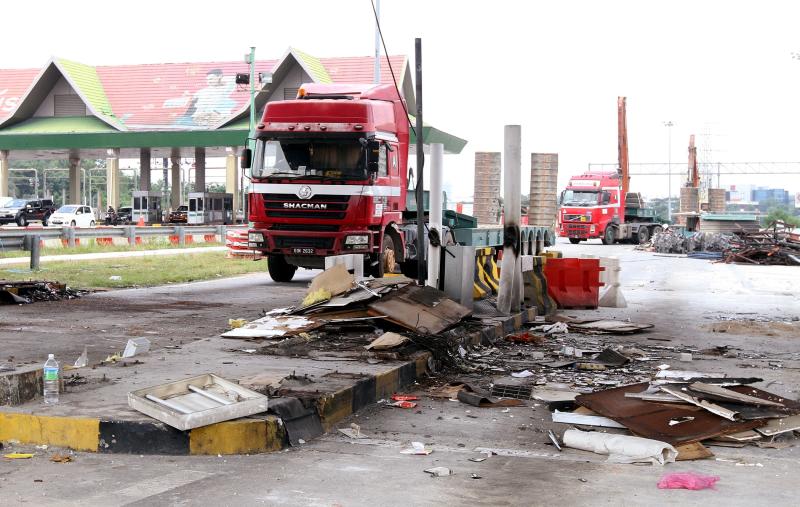 In the meantime, Azman advised road users to be cautious and adhere to the signage when approaching the toll plaza.

All 150,000 road users at Batu Tiga toll are advised to follow the high-mast lighting, road markings and the safety cones that are in place.

Meanwhile, road users were please to find out that works are on schedule.

“Every time I see a speeding car pass through the former toll booth lane, I would flinch. People can be really reckless here,” said motorist A. Manikam.

He said it was about time the toll plaza was demolished since it ceased operations in January this year.

On Monday, Fathurezza Khoirul Huda Halimsuyto, 31, and Noor Hidayah Mohamed Rezmi, 27, who were heading to Shah Alam from Kuala Lumpur, were killed after losing control of their vehicle and crashing into one of the pillars of the toll plaza.

Earlier last month, 21-year-old Muhammad Azki Dahlan Jamit and 20-year-old Norsya’Baniah Norhisham were killed when their car skidded and crashed into one of the booths at the same location.