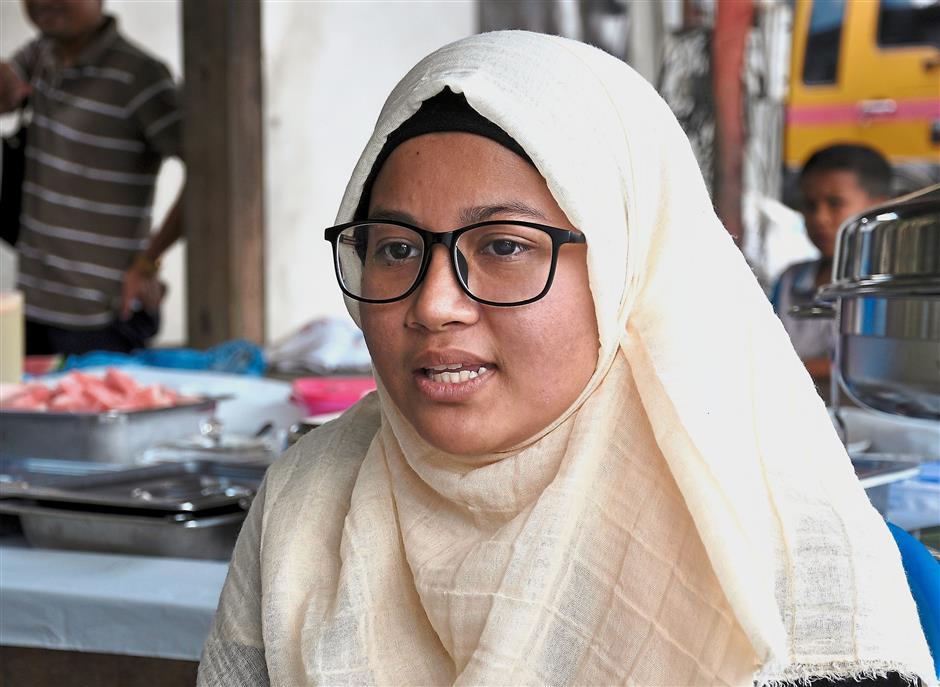 Wan Nur Mafudah, a graduate of the Intec Education College, Kuala Lumpur, enjoyed the fruits of her labour when she was announced as the World Prizewinner for the Association of Chartered Certified Accountants (ACCA) Financial Reporting paper.

The success is a historical achievement for the native of Kampung Tok Raja, Jertih, as she is the first Malay to attain number one world ranking with her score of 95% in the paper.

When met at her parent’s house in Kampung Tok Raja, the third of seven siblings who aspires to become an accounting lecturer said she was thankful to be able to prove that Malays could master the field.

Woman hangs herself to death in house

KOTA KINABALU: A woman is believed to have hanged herself to death in a house at Taman BDC off Kolombong near here on Friday.

A man, believed to be the 38-year-old’s boyfriend, had brought her lifeless body to the Queen Elizabeth Hospital at about 9.46pm, where doctors found bruises on her neck.

Man hangs self after killing friend

GOMBAK: An Indian national hanged himself after killing his friend during a fight.

The victim, Sahubar Ali, 51, was stabbed to death in a sundry shop in Taman Selayang early yesterday.

His attacker and co-worker, who has been identified as fellow countryman Aathamsa Raja Mohammed, aged 32, hanged himself inside the sundry shop after the fight.

Sahubar’s boss, a Malaysian, was injured while trying to stop the fight between the two.

Man injured after being kicked off his motorcycle

GEORGE TOWN: A 60-year-old man is now warded at Penang Hospital after he was kicked off his motorcycle by another motorcyclist while riding along Gurney Drive.

A one-minute video clip showing the incident has since gone viral in social media.

The victim, who is in stable condition, sustained bodily injuries and has been complaining of chest pains after the 3pm incident on Saturday.

“The victim was riding along the road before another motorcyclist overtook and landed a kick on him. The motorcyclist just sped off after that.

“We have interviewed the victim, who claimed he did not have any row with anyone.

“We are still trying to establish the motive,” he said in a statement yesterday.

ACP Anuar said they would record a statement from an eyewitness, who has the viral video purportedly taken from her car dashboard camera.

“I hope we can trace the culprit from his vehicle registration number through the video clip,” he said.

Leachate the cause of foul smell at pond

KUALA LUMPUR: The pollution and foul smell from a pond at Taman Pinggiran Delima in Hulu Langat is due to leachate from an illegal landfill in the upper reaches of the pool area.

In a statement, Natural Resources and Environment Minister Datuk Seri Dr Wan Junaidi Tuanku Jaafar said the leachate entered the drain on the road shoulder before entering the pool downstream.

“Other than the residents of Taman Pinggiran Delima, nearby highway project developers have also been impacted by the leachate flow because it comes through the drain and crosses the highway project site,” he said.

Wan Junaidi said the landfill has ceased operations and the gates to the site were locked by the Kajang Municipal Council. —Bernama “The industry can also flourish with the use of ICT and I would like to propose that we include research and development (R&D) activities too,” he said after visiting Blue
Archipelago Bhd’s shrimp farm in Kampung Penarik here.

Ahmad Razif, who also released about 400,000 shrimp hatchlings at the site, said the shrimp industry in Setiu could also complement the developing Aquapolitan project
in Kuala Nerus.