Getting up close with beloved star

FANS of Taiwanese TV personality Chen Mei Feng were out in force to welcome her at dimsum’s “Celebrate Asia with Us” roadshow at Gurney Paragon Mall, Penang.

Several hundreds of them lined the mall’s atrium to catch a glimpse of the multi-talented actress and celebrity host in a meet-and-greet session.

Among them was Esther Chin, 60, who brought her 88-year-old mother along in a wheelchair. The latter is a fan of Chen, and follows her shows and programmes.

“When I read about this event in The Star, I decided to bring my mother here as she has never seen Chen in real life before. It’s not often that stars come to Penang.

“Though my mother has limited mobility after suffering from a stroke, she enjoyed the occasion,” said Chin, a retiree. Chen sharing some life and beauty tips with fans.

Linda Wang, also in her 60s, was similarly over the moon to meet Chen in person. She came all the way from Butterworth for the session on Saturday night.

“We wouldn’t miss it for the world! She looks even younger in person and we can hardly tell she is 61 this year,” said Wang, who carpooled with relatives for the trip.

Indeed, Chen is known for her svelte figure and youthful looks, which inspired the nickname “Taiwan’s Most Beautiful Obasan” (obasan means auntie in Japanese).

The crowd was keen to find out some of her secrets, and she was more than happy to share. Chen believes that age should be no barrier to one looking good.

“Who says those in their 50s or 60s cannot be beautiful? “Once our kids are grown up, take some time to love and pamper yourself.

“A person should not remain unchanged,” said Chen, who wore hair extensions in contrast to the short, cropped hairstyle she sported in event promotional imagery.

Having been in the showbiz industry for around 40 years, she believes it is important for her to constantly reinvent herself to surprise her audiences.

“No matter how old I am, I'll always have a sense of curiosity in embracing change and keeping up with trends.

“I tell people, if you think my dressing looks good, then try it for yourselves. 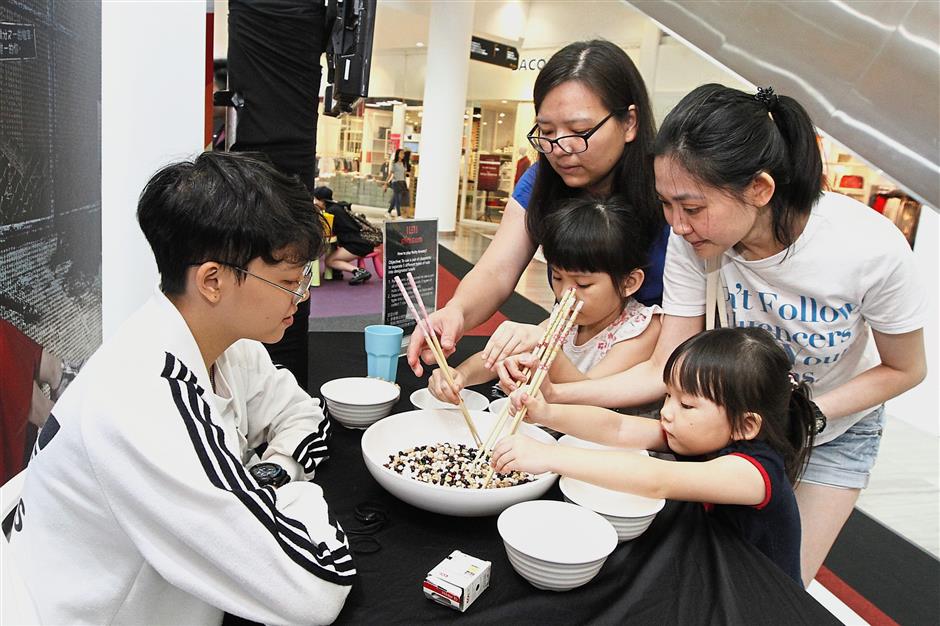 Visitors trying to sort out nuts using chopsticks at the Taiwan pavilion during the event.

“But appearance is only half the equation, as you’ve got to be young at heart too.

“I spend a lot of time with young people, and their energy makes me feel younger.

“Because if you feel old inside, how can you look young physically?

“So, smile often and keep good company that you can share meals and drinks with.

“Eating with friends is one of life’s best pleasures,” said Chen, who hosts the long-running talkshow, A Date with Mei Feng, which is available on dimsum.

Another secret of hers to keeping young is walking. This helps muscles retain their strength and keeps joints flexible, Chen explained.

“I don’t really hit the gym to avoid placing too much burden on my body due to my age. Instead, I walk a lot, whether it’s a stroll in the sun or going shopping.

“Most people emphasise on keeping their bones strong, but neglect their muscles which lose strength with age. These, and the knees, are what support your body. 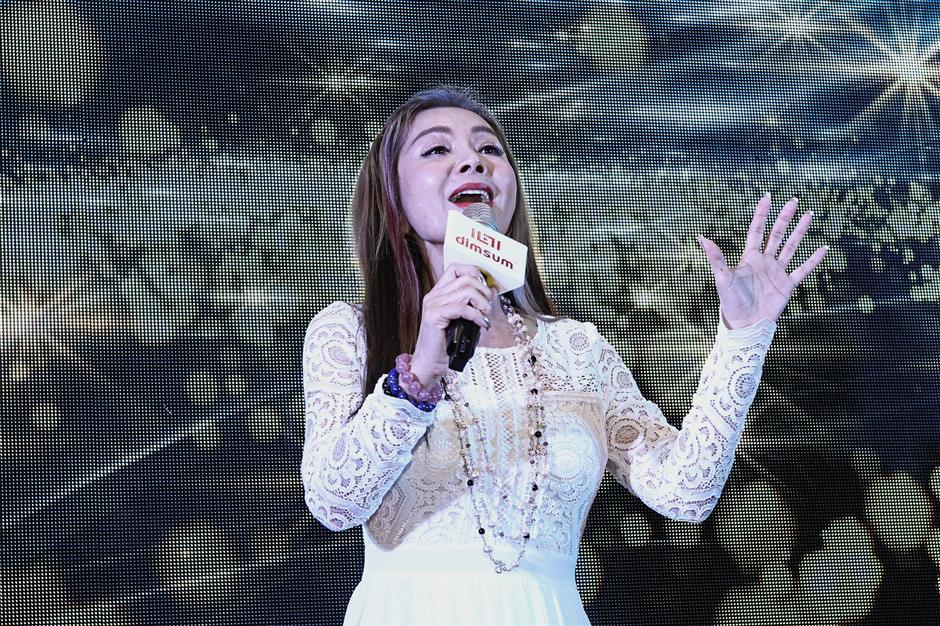 Chen sharing some life and beauty tips with fans.8

“I also do yoga and simple stretching exercises at home,” said Chen, who highlighted the benefits of taking collagen and hyaluronic acid in her show previously.

This was her second visit to Penang, with the first being a holiday many years ago. She found that the charms of the island did not diminish with time.

“Although there is more development now, the heritage houses are preserved well. I was particularly drawn to the police stations, which look like apartment buildings.

“I managed to visit the beach earlier in the day, and did a live video on my Facebook showing the view of the city and the sea.

“As I live near the Taipei 101 tower, all I get is a city view. And that makes me very appreciative of scenic beaches.

“To top it off, I tried the local seafood and it was a very authentic experience.

“The cold snap over the weekend made it very comfortable being outdoors as it wasn’t warm at all,” reveals Chen, who also had kind words to say about fans here.

She added, “They’re all very warm and sincere. As they watch my dramas, they’re familiar with me and it feels as though we’re good friends. It touches me that many stayed till the very end to see me off.”

Chen also reminded fans to keep a lookout for her special Chinese New Year programmes that will be broadcast simultaneously in Taiwan and on dimsum — Star Media Group’s video-on-demand subscription service.

Offering a myriad of shows from China, Japan, South Korea, Hong Kong, Taiwan, Singapore, Thailand and Malaysia, it was a hit with crowds throughout the three-day roadshow that ended on Sunday.

Many took advantage of the special first anniversary offer to sign up at only RM5 a month, including retired couple Peh Khay Cheng and Lim Poh Hiang, aged 69 and 64.

“We saw the publicity in The Star and decided to come and register. My wife likes watching dramas in the evenings, and at RM5, it’s a good deal,” Peh said.

Auditor Teoh Jes, who is in her 30s, looks forward to having access to more shows from across the region, of which some may not be available on other platforms.

She and her daughter Celine Lee, 16, enjoy learning about new places and cultures from what they see on TV.

“When we see a place that’s interesting, we’ll Google it to find out more.

“And sometimes if it really catches our eye, we end up going for a holiday there.

“That’s our aim of signing up — to see more of the world,” Teoh quipped.