(Above) Comm Hasnan (right) giving the thumbs up while presenting the certificates of appreciation to Kons Muhammad and (picture at right) to L/Kpl Mohd Farid at the state police contingent monthly gathering.

A TOTAL of 46 policemen in Perak were arrested between January and September this year compared to 61 during the same duration last year.

This is a drop of 24.6%, said state police chief Comm Datuk Hasnan Hassan.

The policemen were arrested for cases including crime, bribery, Syariah-related matters, drug possession and drug use.

“There’s no compromise when it involves policemen. We are very strict.

“Disciplinary actions will be taken against any policeman who commits an offence,” he told reporters after the state police contingent monthly gathering at its headquarters in Ipoh.

“There are already cases whereby policemen have been charged in court. They have been suspended until the court delivers a judgment,” he said.

Earlier during the gathering, Comm Hasnan commended two policemen from the Pangkor police station for rejecting a bribe at Sungai Pinang Besar in Pangkor on Nov 7.

He said an illegal immigrant offered RM500 to Lance Corporal Mohd Farid Ahmad and Constable Muhammad Izzad Ezmiel Roshaizad to not take action against him. 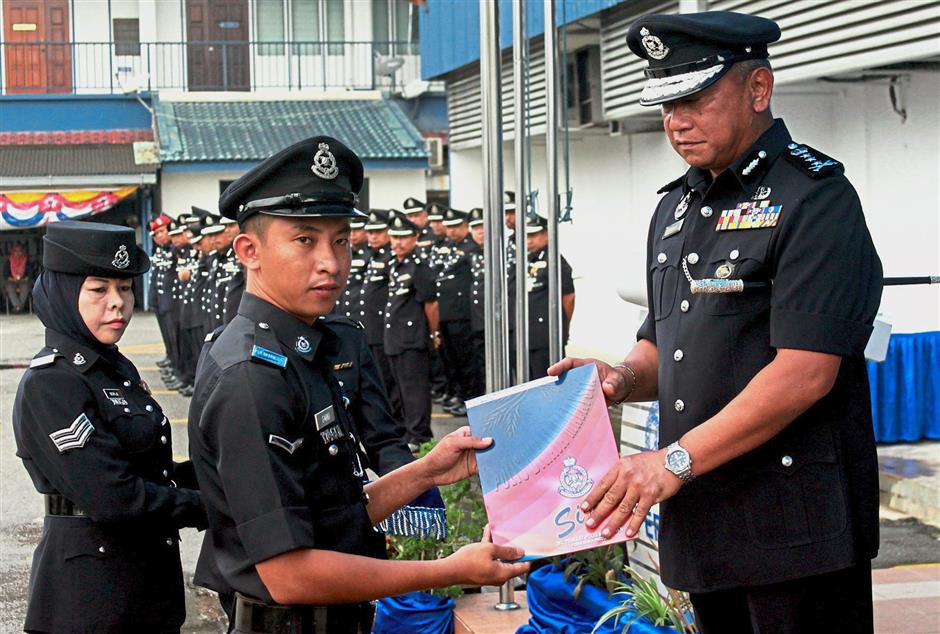 “The man, who was not wearing helmet while riding a motorcycle, also did not have proper documentations on him.

“And despite numerous warnings not to offer the bribe, he insisted and was arrested,” he said.

Comm Hasnan said discipline among policemen was important and that the Inspector-General of Police Tan Sri Mohamad Fuzi Harun’s call to have high integrity must be adhered to.

“Without strong faith, the policemen would have accepted the bribe,” he said, adding that 18 policemen rejected bribes in five incidents this year.

“This is a good sign, which means the IGP’s orders are being followed,” he added.

On another matter, Comm Hasnan said about 8,500 policemen and 500 Police Volunteer Reserve (PVR) members will be on duty during the general election in Perak.

He said they are now running its “Ex PRU” exercise to prepare for the election in terms of logistics and any situations that may occur during the election.

“We are conducting the exercise based on our intel.

“Our preparations are at 95% and we have just completed the first of five phases of the exercise, which was to check that our operations room can run smoothly,” he said.

“This is to ensure all telecommunications, computers and servers are all working properly,” he said, adding that the second phase would be carried out on Thursday.

“We will repeat these exercises until the elections,” he added.