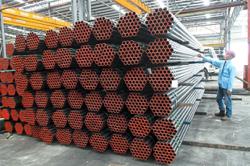 Rock solid: Descaff Group managing director N. Sunderaj and director Chris Hillier on top of one of the scaffolds that they manufacture.

Sometimes when you require quality products, you have to build them yourself, as this scaffolding solutions company did.

As the saying goes, a chain is only as strong as its weakest link. In manufacturing, with the use of thousands of parts of varying strength and materials, sometimes within a component itself, how does one ensure that a final product works as intended?

You can’t – unless you have control of the manufacturing process itself, says Descaff Group managing director N. Sunderaj, 38.

Sunderaj, who started the scaffolding solutions company in 2012 with British-born Chris Hillier, 49, says materials that could be used to manufacture scaffolds have improved, and he wants his company to be at the forefront by adopting evolving scaffolding technologies enabled by improvements in materials.

“We can now use higher grade steel which allows us to manufacture lighter scaffolds with better designs, allowing us to improve efficiency during the erection process,” he tells Metrobiz.

Scaffolding, or also called staging, is a temporary structure used to support people and material during the construction or repair works of buildings and other structures. 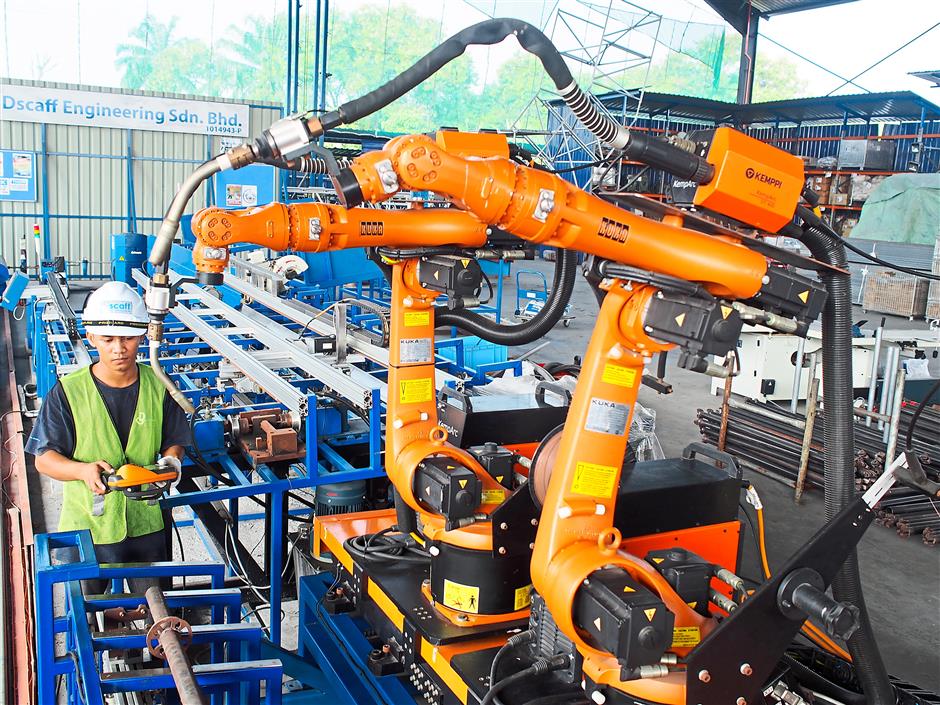 Precision: A technician doing maintenance work on the robotic arms used to produce high quality welding for some of Descaff Group’s scaffolding materials.

Sunderaj first met Chris, now the company’s director, through business dealings. Chris had a company that designed and manufactured industrial lifts and supplied some of the scafffolding materials to Sunderaj. The two men realised that the quality of scaffolding materials were inconsistent as they had encountered a fair bit of faulty goods.

One such example they came across was the forged coupler. Chris told Sunderaj: “Let’s do something about it.”

This eventually led to them going into the manufacture of reliable and consistent scaffolding.

As the saying goes, innovation is about seeing something familiar with fresh eyes. They had a lot to offer in terms of scaffolding manufacturing process, as Sunderaj had been involved since 2000 in scaffolding contracting works after graduating with a degree in applied physics, while Chris had assembled scaffolds since he was 18, including during stints in Saudi Arabia.

Chris says most manufacturers make a product without really understanding its usage, unlike Sunderaj and him with their vast experience in erecting scaffolds. As such, they know where the weak points are and what to do about them, including doing the necessary quality control test to ensure reliability.

“It need not use costlier materials. It can be as simple as getting the right angle for a hole to be drilled, to adding more steel in specific areas, to having the right forging temperature. If you do not understand your product, these are details that would never occur to you,” adds Sunderaj. 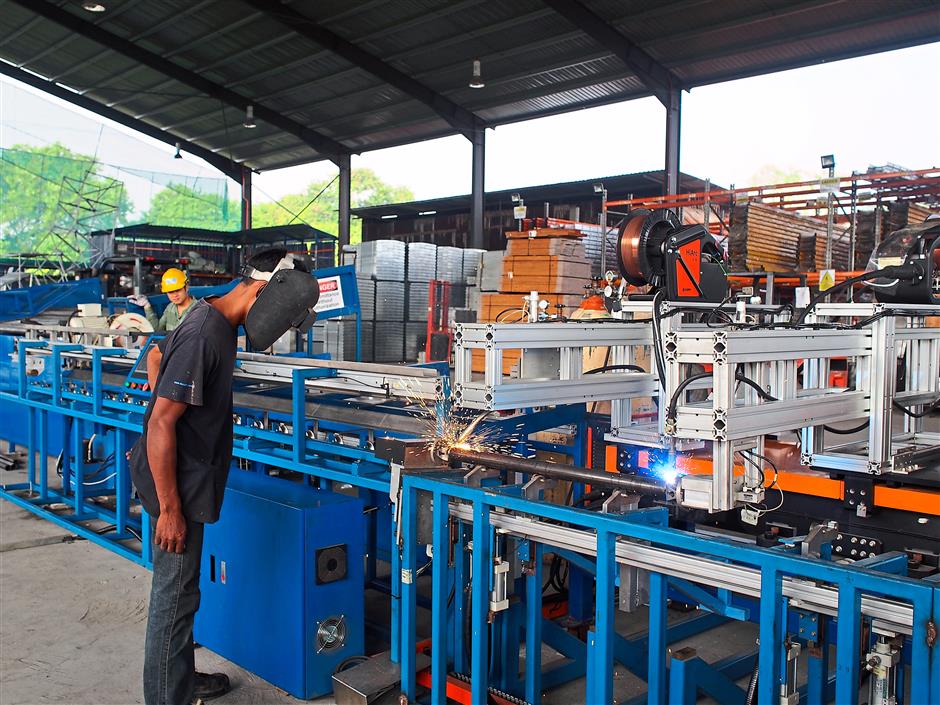 Rigorous: A technician inspecting welding of some of the scaffolding components.

They started their new business in late 2012 in a rented 2,000 sq ft office in Plaza Mount Kiara with eight staff with specialities in engineering, logistics and accounting, all within the scaffolding industry.

“Staff expertise aside, we also had our previous contacts to thank for providing us with generous credit terms when supplying us with steel coils, bars, tubes and others which could amount up to RM10mil, due to our track record in the industry. One even provided some 30,000 sq ft of land to stock the supplies,” Sunderaj says.

That may just explain how a relatively young company, which can be described as having “no track record and hence not bankable” by the banking community, is continuing to make its mark in the scaffolding segment.

Their products are used in Malaysia mainly in the energy sector, including the oil-and-gas and shipping industries, whereas in the Australia they are used for more sectors, including construction.

After getting the right design of one of the vital components, the forged coupler, which is used to join various steel tubes together to create access for workers to do painting, welding, inspection and other activities, they partnered with a contract manufacturer in Klang in 2013 to make the component using their specifications. 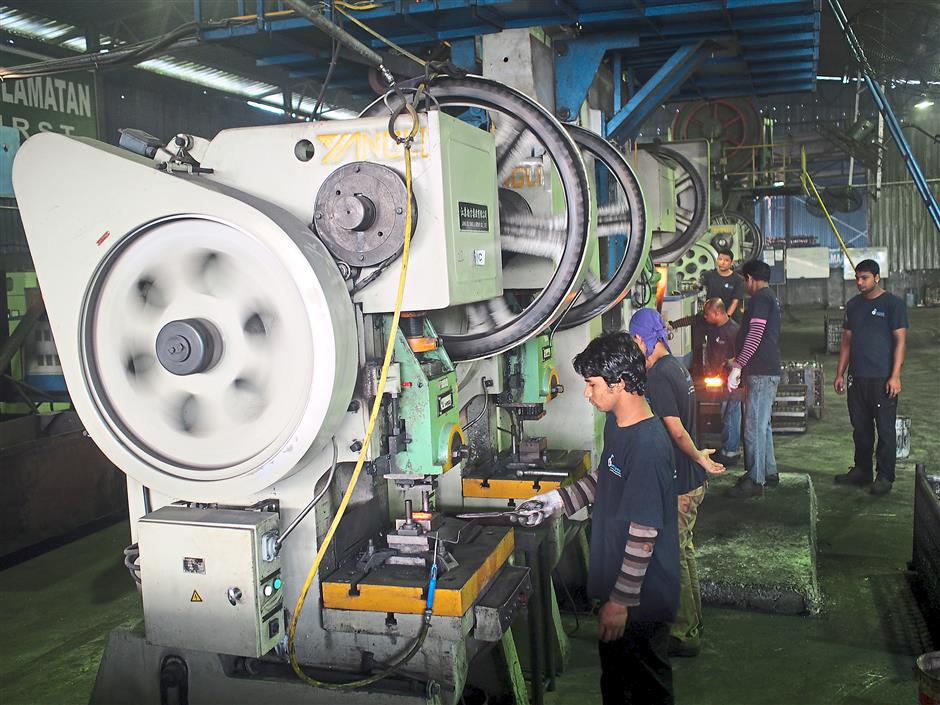 Man & machine: Factory operators hard at work in manufacturing one of the coupler designs.

“You can see why the potential is immense. In the oil-and-gas industries, for instance, a scaffold is required in any area where people need to work at a height exceeding 2m,” Sunderaj says.

Concurrently, they have also engaged a contract manufacturer in Batu Pahat, Johor to manufacture metal decks used to create platforms as part of the scaffold to create access to heighten areas.

With a capacity to manufacture 12km of deck a day, they are selling the product in South-East Asia, Bangladesh, Africa and Australia.

They achieved this after applying finite element analysis (FEA), a computational tool for performing engineering analysis, and making improvements. 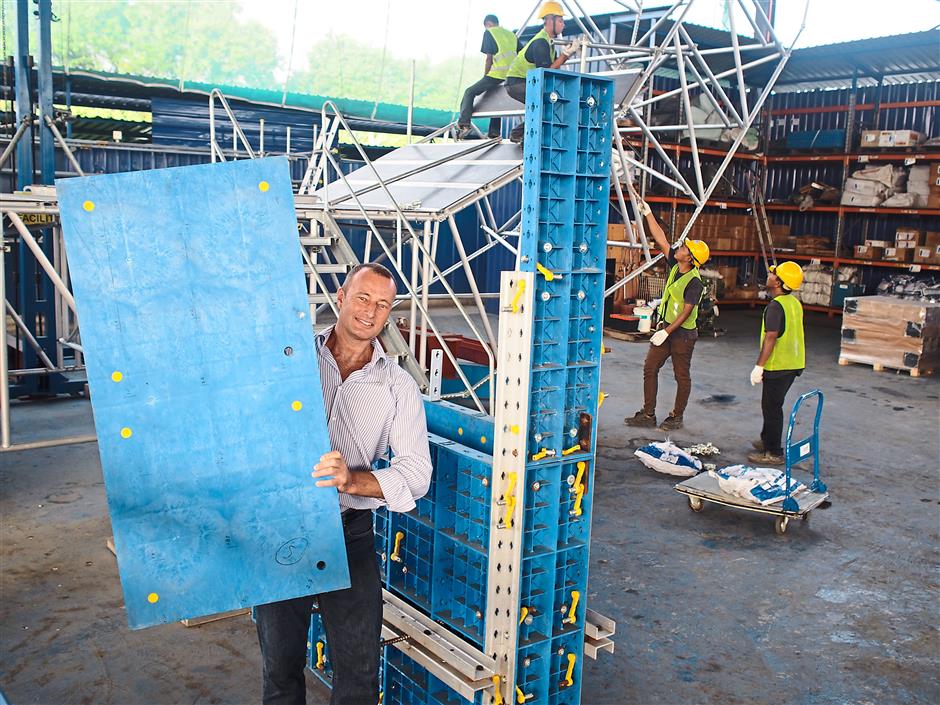 Innovation: Descaff Group director Chris Hillier lifting one of the company’s innovation, the sustainable building solutions (SBS) formwork system using recyclable plastics and reinforced with steel instead of the conventional wood-based formwork that is not environment- friendly.

To-date, the company has invested about RM10mil in machineries and another RM3mil in R&D, including purchase of simulation software and computers.

But above all, they have also made the all-important investment in human capital, Sunderaj says.

Reaping the dividends today, they are now also able to produce the SAS (or shoring access staging) where the scaffolds, instead of requiring a spanner, water level and tape measure to erect, could be done just with a hammer to knock the parts together as they are built as modules, just like Lego blocks.

In 2014, they rented a three-acre factory land to manufacture this system, while expanding their storage of materials.

“Such systems can be exported to Australia with a minimum system costing from about RM20,000, to more extensive ones costing beyond RM10mil,” Sunderaj says.

Moving forward, the company intends to actively build a rental business called Dsaff Capital Sdn Bhd, where companies can rent the scaffoldings with an option to purchase them at a lower price at a later date. 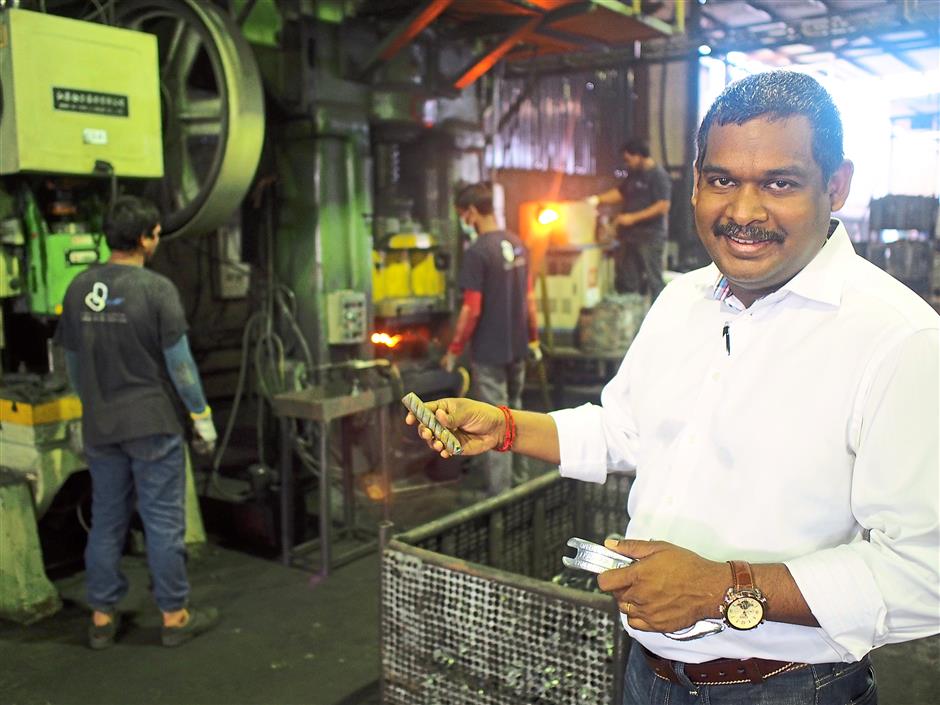 Proud: Sunderaj showing how a piece of metal is being perfected as an effective coupler as part of the scaffolding system at one of the contract manufacturer’s plants in Klang.
Article type: metered
User Type: anonymous web
User Status:
Campaign ID: 18
Cxense type: free
User access status: 3