1 Jalan SS9A/1, the main road for Seri Setia New Village. A typical morning scene at the new village’s commercial area.2 Despite its official name of Seri Setia New Village, even the newly erected arch denotes SS9A as Sungai Way New Village.3 SJK (C) Sungai Way, the school that then-US vice president Nixon and his wife Thelma visited the school, while stopping by in the village back in 1953.4 Cook Chai Yoon Wa salts ikan kembung to be deep-fried – the specialty at the stall with no name in Jalan SS9A/14. However everyone calls the stall ‘Tai Shue Thou’ (literally under big tree).5 Ong Mok Ong Yen, who still works as a “tie da” Chinese physician, holds up a photocopy of his Home Guard identification from the Emergency years.6 Ah Sang Bak Kut Teh opens from morning and usually caters for the lunch crowd craving their pork ribs and herbal soup. The place usually cleans out by lunch.7 Ani (back) preparing desserts with her worker to sell at their stall in Jalan SS9A/1.8 Less than 200m up the road

BOUNDED by the Federal Highway on one side and the Damansara-Puchong Expressway (LDP) on the other, Seri Setia New Village and its surroundings are a far cry from the Emergency-era settlement it once was.

As part of the Kampung Tunku state constituency, and designated SS9A in the Petaling Jaya City Council’s subdivisions, the new village received its present name more than 10 years ago, although it is still commonly called “Sungai Way New Village”, after Sungai Way, a tributary of the Penchala River.

During the colonial era, Sungai Way was a major tin-mining area, as evidenced by companies with names such as Sungei Way Tin, a British-owned mining concern, which owned a total of three tin-dredging ships, according to information provided by the village’s committee.

With the 1,011ha Sungei Way Rubber Estate on one side and tin mining stretching all the way to Sungei Besi, the place attracted many Chinese, primarily Hokkien and Hakka settlers. 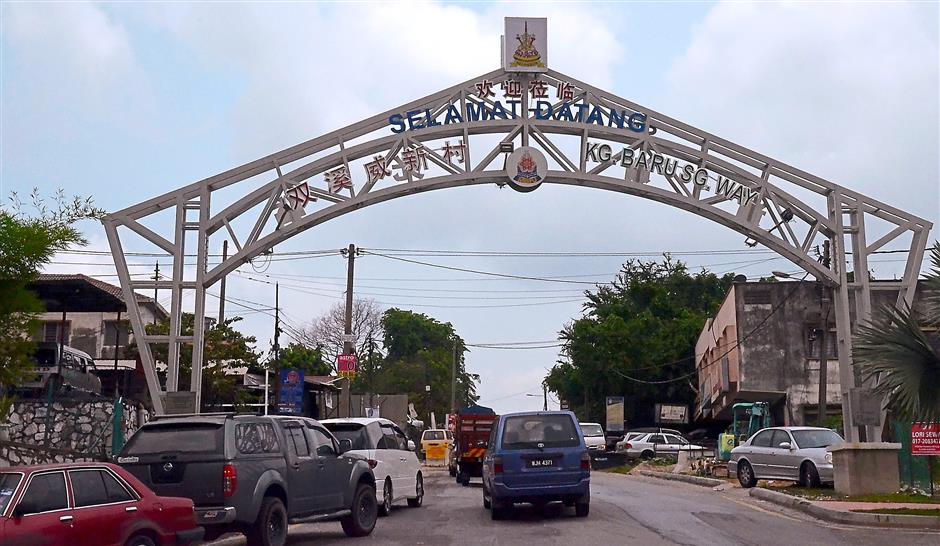 Despite its official name of Seri SetiaNew Village, even the newly erected arch denotes SS9/A as Sungai Way New Village.

These days though, Sungai Way has been forded up on both sides into a major monsoon drain, and the area now reduced to the village itself, although the name still lives on in places such as the Sungai Way Free Trade Zone area, as well as the Sunway group of businesses.

As the new village itself was founded in response to the Communist threat in 1950, people like Ong Yen @ Ong Mok, 79 recall serving in the Home Guard, the volunteers who patrolled the village against Communist insurgents.

“The curfew was set from 7pm till 7am the next day, anyone out wandering beyond 7pm was arrested,” said Ong, who now still plies his trade as a “tie da” Chinese physician.

“Nearby was Kampung Penaga, a known Communist area, and anyone leaving the village was searched. Cook Chai Yoon Wa salts ikan kembung to be deep-fried-the speciality at the stall with no name in Jalan SS9A/14.However everyone calls the stall 'Tai shue Thou' (literaaly under big tree).

“A person was usually allowed to bring, say one bottle of water and one loaf of bread on his journey.

“More than that, we or the British would question him ‘why do you need to bring out so much food, who are you going to see?’” recalled Ong, giving an example of how government forces denied supplies to the insurgents then.

One of the village’s most well-documented events, is of course then-United States vice-president Richard Nixon, along with his wife Thelma, stopping at the village and visiting now-SJK (C) Sungai Way

Although most new villages retain their original layout, and in some situated in the outskirts, even their original buildings, most of SS9A’s residential buildings have been renovated and rebuilt over and over as economic opportunities nearby increased.

“When the village was first founded, the space around each household’s lot was enough for one to plant some vegetables and even rear pigs. We also built outdoor toilets,” recalled hawker Leow Yoon Yeow, a second-generation new villager. 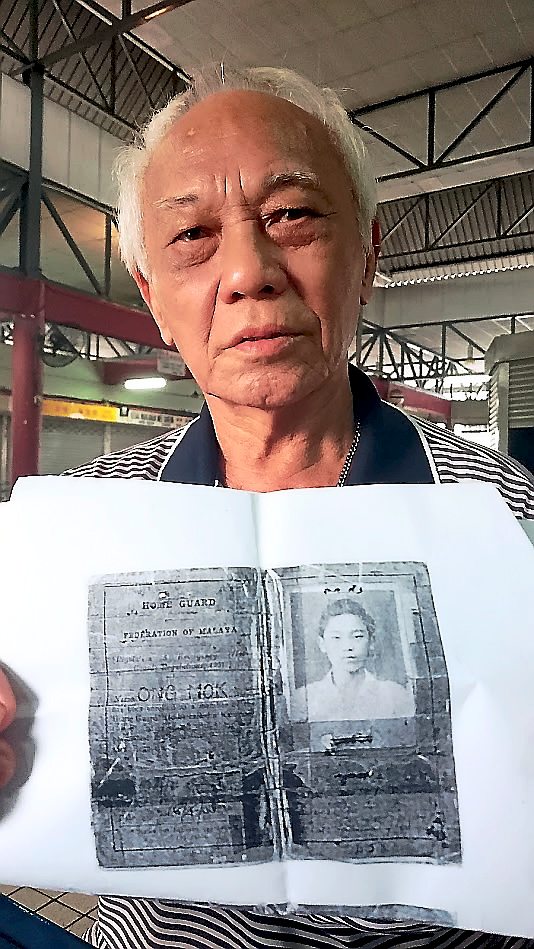 Ong Mok@Ong Yen, who still works as a 'tie da' Chinese physician, holds up a photocopy of his Home Guard identification from Emergency years.

Now, with some houses renovated right up to the edge of their allotment, roads are a tight fit and village headman Ding Eow Chai, along with local councillor Sean Oon, have had to solve problems such as how to provide some basic services such as waste management.

This situation slowly changed with the founding of the Sungei Way Free Trade Zone in the 1970s.

The influx of large multinationals such as Western Digital and Matsushita spelled economic prosperity for the nearby villagers.

As the villagers grew prosperous and with the influx of foreigners to work at the factories, some used the opportunity to turn their houses into workers’ accommodation. Some villagers joke uneasily that the place might no longer be a Chinese New Village for much longer.

“I’d say that’s one of the biggest changes many of us have seen over the years, as this area is now turning into prime land so people sell their houses and move to newer townships,” said Ding, who moved here in the 1980s and was appointed head of the village’s committee on development and security (JKKK) over four years back.

StarMetro had previously highlighted the evolving character of Seri Setia New Village back in 2012, where kampung houses then were already going for what now seems a reasonable price of RM400,000, and half the new village’s population now comprise foreigners.

Nonetheless, the village still has much to draw visitors in terms of Chinese cuisine, always a favourite subject with locals and visitors alike. 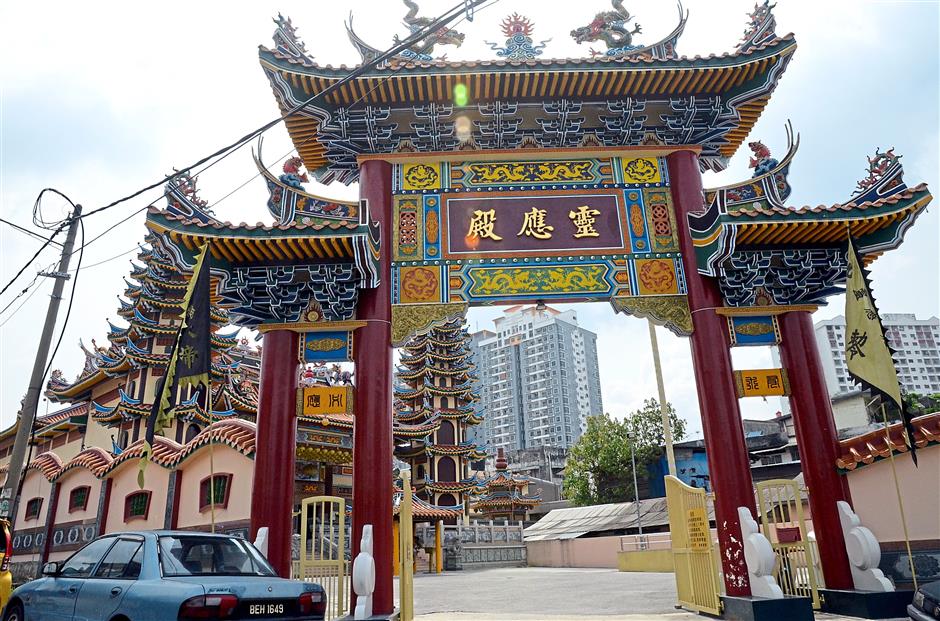 The Leng Eng Tian Khiew Ong Tau Tai Temple, now fully built and painted in all its splendour in Jalan SS9A/2. The temple's ceremonies especially the Nine Emporer God's Festival, attracts devotees from all over the Klang Valley.

Given its Chinese founding, dishes such as bak kut teh and char siew are well known here, with one of the two most popular places being of course, Ah Sang Bak Kut Teh, in Jalan SS9A/12.

A visit to Ah Sang’s during lunch time saw the place crowded with local Chinese and even foreigners from the nearby commercial buildings. The place usually wraps up its business just after 2pm.

Less than 200m up the same road, there is The Home Cooking, whose current cook and owner Ong Kim Lian had taken over from his uncle who retired more than eight years ago.

The 30-old-year restaurant is popular with the lunch crowd who go for its bittergourd fried fish and char siew. The restaurant is packed during weekdays and weekends.

Immigrants are also leaving their mark on the area’s food scene, and Ding remarks that several stalls in the area are now popular for their bakso (Indonesian beefballs) as well as Nasi Padang.