Tale of a dragon: Part of Sungai Langat runs through the heart of Dengkil town. The name ‘Dengkil’ is said to have originated from the local Chinese community, who called it ‘Ling Kay’ or dragon stream following a legend that a dragon had meditated here for 900 years but was driven away by the British.

DENGKIL is a stark contrast to the ultra-modernity of nearby cities, Putrajaya and Cyberjaya.

There are no sparkly high-rise buildings or squeaky-clean pavements.

The outskirts is made up of idyllic villages and housing estates, but gets progressively busier as one heads to the centre of town where there is a police station, a mosque, a wet market, shops and several schools.

It was formed in 1950 during the communist insurgency in then Malaya, when the British gathered the scattered Chinese communities in Banting, Air Hitam, Batu 4 and Dengkil into one area.

Village security and development chairman Tan Sin Dee said although the village was formed much later, Chinese migrants had settled in Dengkil as early as the 1920s. Beautiful: The 89-year-old Tian Hu Gong temple is one of the oldest structures in the area and is dedicated to Nazha, or the Third Prince in Buddhist and Taoist beliefs.

There are a number of legends surrounding Dengkil’s name.

Among the local Chinese, stories tell of a dragon that meditated here for 900 years and would achieve godhood in another 100 years.

Before it could do so, the British arrived and drove it away by setting it on fire.

The dragon vomited black blood from its injuries, forming a river with dark water which locals called “Ling Kay” or “dragon stream” in Hokkien. The name soon became Dengkil.

Another possible reason for the name is the large number of lobsters, during the early 1950s, found in Sungai Langat which runs through the centre of town. Lobsters are called “long ha” or “dragon shrimp”.

There is an abundance of culture and history in Dengkil New Village, as seen by the traditional village homes which have retained their wooden structure and zinc roofing. 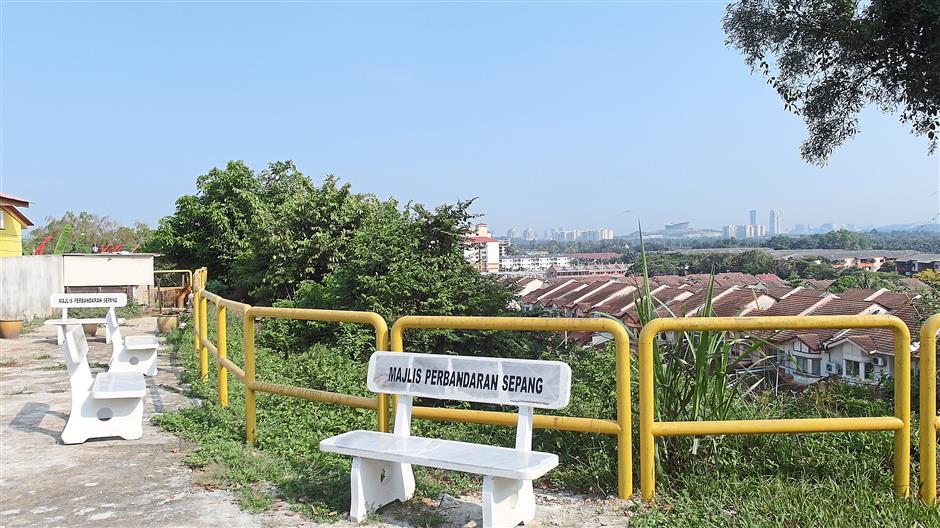 In the pipeline: Sin Dee plans to improve tourism by offering facilities and preserving the heritage. She has started a project with the local council to create a ‘lookout point’ and mini park atop one of the hills in
Kampung Baru Seri Dengkil.

A few even have elevated floors supported by concrete pillars a la Malay kampung houses.

One of the oldest buildings in the village is the 89-year-old Tian Hu Gong temple.

Built in 1926, it is dedicated to the Chinese deity Nazha, or the Third Prince.

Its pink and red facade is decorated with carvings of dragons and fish, while a concrete prayer area facing its entrance has special nooks to hold large joss sticks.

Villager Kiew Wun Fui, 73, said it is a grand occasion on the 15th day of the third lunar month in the Chinese calendar – Nazha’s birthday. 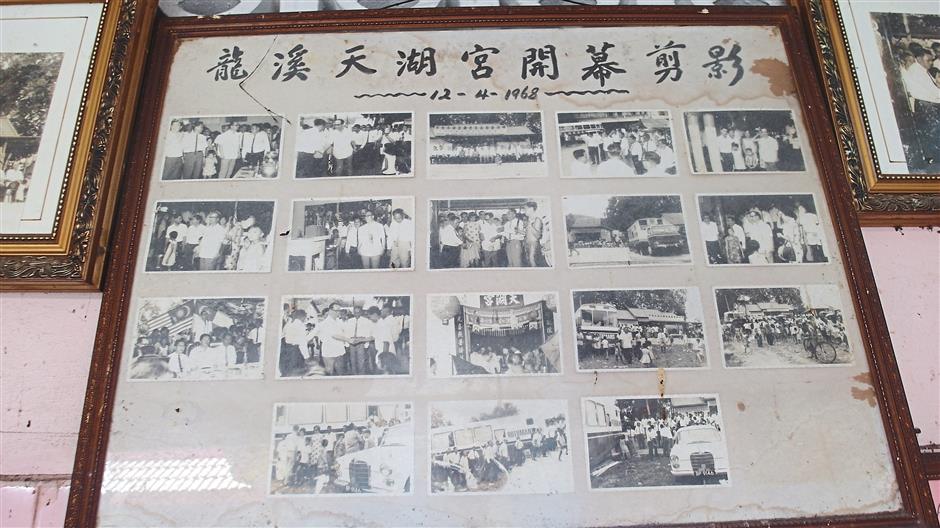 “The whole village will celebrate in his honour by offering prayers and organising a traditional Chinese opera,” he said.

Some of the varieties sold include pumpkin, yam, mui choi (preserved vegetables) and curry chicken buns.

The stall, which has been operating for more than 20 years, is sandwiched between two other famous restaurants along Jalan Besar Dengkil — one selling steamed chilli fish and the other, handmade noodles.

The eateries are housed within wooden shoplots which form part of the original two rows of shops in the centre of town.

Kiew, whose grandfather came from China and settled in Dengkil, was born and raised here.

“In the 1950s, Dengkil was a prosperous place as Sungai Langat was rich with tin,” he said.

Tin mining and rubber tapping became the primary source of income for many villagers, and at the height of tin mining in the 1960s, Dengkil had seven tin dredges. However, villager Tan Chee Kiat, 63, recalls how a big flood in 1969 inundated the town and new village.

“The floodwaters were as high as the first floor of some shops. Many families lost their possessions and some took the chance to move to Pandamaran in Klang,” said Chee Kiat.

He added that a drop in demand for tin and rubber saw people migrating away from the village in search of better opportunities.

“For several years, Dengkil was very quiet. Then in the 1990s, along came Putrajaya, Cyberjaya and the KL International Airport. It gave breath to the dying town,” said Chee Kiat.

Today, Dengkil acts as a transit point for travellers, as well as a popular lunch stop for those working in nearby places.

Kiew has fond memories of his youth, growing up in the village.

“The police station has been around since the 1920s. The villagers used to watch films on a projector within the station’s badminton court,” he said.

“The village used to be surrounded by estates and jungle. When I was a child, we could even hear tigers roaring in the hills!” he added.

“There are many hotels now as some travellers come here to stay before leaving for the airport. We have become a transit town,” he said. Familiar: A traditional wooden house in Kampung Baru Seri Dengkil that is similar to traditional Malay houses, with its elevated flooring supported by concrete pillars.

“The businesses here used to cater to locals, but now it is booming,” said Chee Kiat, adding that there were many convenient highways that could get villagers to Kuala Lumpur within a few minutes.

However, development comes at a price and both he and Kiew agree that pollution is on the rise.

“Some villagers are moving out and they rent their village homes to foreigners. Part of our identity is lost,” said Sin Dee.

She hopes to take a leaf out of the examples from places such as Sitiawan and Tanjung Sepat, which have transformed their villages into tourist attractions by preserving their trade and heritage.

“We have many unique buildings here. I hope to turn some of them into museums showcasing our village’s history,” said Sin Dee.

She hopes to transform the place into a tourist hub while preserving the village’s charm.

One such project, done in collaboration with the local council, is transforming a small space atop a hill within the village into a lookout point. The mini park has benches, greenery and a commanding view of the surrounding areas.

As I concluded my visit to Dengkil New Village, I came away humbled by its charm, and how its villagers are striving hard to maintain their identity and history so that it is not washed away by the rapid tide of development.