Show of love for ashram

Fluid movements: Sutra dancers moving to the beat of the music.

PASSIONATE, delightful, and mesmerising, these were just some of the adjectives that came to mind when watching the talented dancers from the Sutra Dance Theatre perform.

The facial expressions, eye movements, body language were concise to the sound of their ankle bells.

The dance, Odissi, featured ‘Suryastaka’ — a work describing the Sun (Surya) as The One who is Dispeller of Darkness (Ignorance), and Bringer of Light (Knowledge).

Emerging from primordial waters, Surya is the centre of creation and possesses visionary faculties to see beyond short-term solutions to choose a decision that benefits long-term future. Lights show: A colourful lights display bathed the ashram in many colours during the birthday celebration.

The Sun is the metaphor for Light of Knowledge and the work appeals for timeless wisdom not to fall into the trap of greed and short-term gain.

Another performance that wowed the crowd was by the Temple of Fine Arts who performed the Thillana, which features rhythmic foot movements.

Based on the audience’s contented faces, music composer P. Suryakala, dance choreographer, Shankar Kandasamy and performers Malavika Narayanan and Priyanka Murali did a great job with the performance. Traditional tunes: Kalpana Paramjothy and Selvendrrah Krishna from the Temple of Fine Arts performing the sitar and tabla.

Dance director Malar Gunaratnam said, “The event is very significant for Temple of Fine Arts as it was the first place where our guru and Temple Of Fine Arts founder Swami Shantanand Saraswati held his first public satsang (prayer gathering) at the Ashram in 1971 and subsequently we continued holding satsang at the Ashram.

“The Ashram had been like a nucleus for the continuity of the Temple Of Fine Arts,” she added.

“Our pioneers namely Vatsala Sivadas and Radha Shetty had performed on several occasions at the Ashram in the 1960s and 1970s and this is why it is of great sentimental value to all members of the Temple of Fine Arts and the artistic fraternity.

“Swamiji and TFA members have great reverence towards Swami Vivekananda and rightfully we wanted very much to commemorate his memory by paying tribute to swami Vivekananda on this significant occasion,” she said.

Artistic director of Sutra Dance Theatre, Ramli Ibrahim said: “The Vivekananda Ashram is one of the major iconic landmarks of Brickfields. It is a heritage building which has significant historic value and needs to be preserved and celebrated as one. 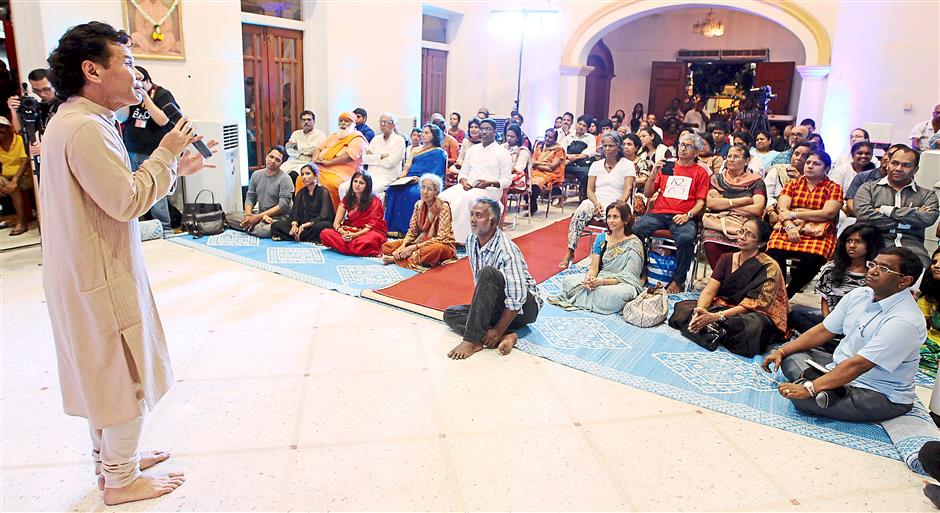 Taught at the ashram: Ramli speaking during the event.

“The presence of so many people from all walks of life to celebrate this auspicious day is testament of the people’s concern that this ashram be saved and cherished to remind us of who we are.

“In 1987, the Vivekananda Ashram provided me with the space for my first dance class on my return to Malaysia — as it did for many others — besides also providing as an active platform for many cultural activities in this unique part of Kuala Lumpur.

“The Brickfields community regards it as an integral part of its history. If we loose the ashram, part of this precious history will be irretrievably lost. After all, Brickfields does not need another high-rise building.

“Already, at present, the Brickfields community is complaining of the saturation of buildings and the traffic congestion which is making life unbearable for them as a result of over-building in the area,” added Ramli.

The cultural event was held in conjunction with the 152nd anniversary of Swami Vivekananda’s birthday at the Vivekananda ashram, in Brickfields.

Apart from the performances, the event also featured a sitar and tabla show by Samuel Dass and Prakash Kandasamy and carnatic music recital by Vijayalakshmi Arumugam and Harihaaran Arumugam.