Though their specialities are different, both chefs share the same passion to prepare unforgettable dishes for their guests.

Specially made dishes spread across two rotating menus will be added to the daily buffet line.

During the media review, the chefs donned black outfits and pink boxing gloves and marched out to the theme of Rocky.

Hamid showcased his love for Indian and local cuisine while Hanis emphasised western fusion dishes in his menu.

Hamid presented an eye-catching plate of Lamb Tandoori in briyani with mint sauce, onion pickle and raita on the side.

I tried his Rendang Itik and found that it was very similar to chicken rendang. The meat was tender, easy to cut through and the rendang was not too spicy.

Lemon and Pomegranate Couscous with Shrimp provided a burst of different flavours and is a refreshing dish if you’re looking for something to clean your palate before moving on to other dishes in the buffet line. 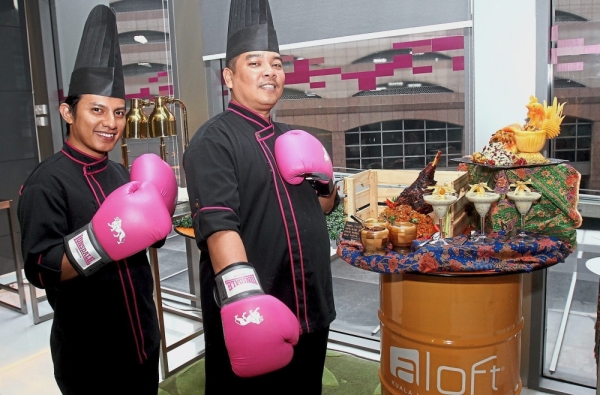 A popular dish during the preview was the Sup Ekor, which came with vegetables instead of just broth with meat.

Among the other highlights that will be part of Hamid’s menu are chicken briyani, lamb varuval, chicken tikka with tandoori sauce, and Daging dan Rebung Masak Lemak.

There will also be desserts like Bubur Kacang Hijau Durian and Bubur Gandum dan Jagung.

A must-try from his menu is the Japanese beef skewers – Sous Vide Beef Kushiyaki with Crispy Rice. Laid out on a mini grill rack were three cubes of beef that were well-marinated, juicy and tender.

The dish took 48 hours to prepare and though I loved it, it would have been more enjoyable had it been warm.

Hanis’ dishes were certainly a feast for the eyes. One of the more interesting presentations were Chilled Soba Noodle with Scallions and Leeks served in a martini glass with a large syringe filled with sauce for the noodles.

Hanis also showcased his version of a Seafood Paella which was dressed with prawns, red capsicums and mussels.

From the desserts, I enjoyed the Lemon Curd with Meringue and was pleasantly surprised that it was not sour at all.

Nook’s “A Showcase of the Executive Sous Chefs” buffet dinner is priced at RM120 nett per adult and RM60 nett per child aged six to 12.