KANCHONG Darat residents have expressed their concern over the presence of Bazaar Darul Ehsan in Kanchong Darat in the Kuala Langat district.

The complex, which is situated next to Sekolah Agama Menengah Unwanus Saadah Kanchong Darat Banting along Jalan Morib, appears to have been abandoned since its completion a few years ago.

They said that they had no knowledge of what was being built, until they saw two signboards placed inside the compound and outside the gate with the name Bazaar Darul Ehsan.

A resident, Abdul Samad Arifin, 60, said the residents thought the building was supposed to be a community business centre but were surprised that it was never opened.

“I hope those responsible to build the complex will open it soon so that it will serve its purpose,” he said

Businessman Thomas Zacharia George who lives in Kelanang, about one kilometre from the abandoned complex, claimed that the building was an eyesore.

He said the complex grounds was filled with undergrowth, overgrown creepers and grass.

If no prompt action was taken, George feared the complex would be used for unsavoury activities such as drug addicts looking for a quiet place to get their fix.

He pointed out that the building was located in an isolated spot.

“I fear it will pose a security threat to people living in the area,” he added.

Kuala Langat MIC leader S. Batumalai said he had not seen any business activity being held at the building since it was built.

He said he believed the building could be put to good use to promote economic activities for the benefit of the villagers who are mostly farmers and smallholders.

“The space is ideal for the villagers to promote their produce as well as products such as handicraft and snacks,” he said. 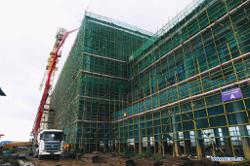