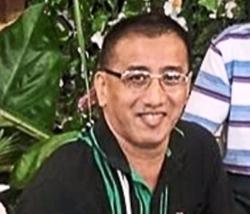 AT THE sound of the afternoon bell, schoolchildren of all ages rush out of their classrooms and head straight for the street vendors outside the school gate to buy a variety of foodstuff.

The most popular items are sweetened ice cold drinks with artificial flavours and colouring as well as coloured candies, chocolates and ice-cream potong.

The street vendors on three-wheelers and small vans also sold a variety of sweets, carbonated beverages and even energised drinks in sachets that are not suitable for children.

While the authorities know that the children were exposed to unhealthy eating habits, traders, some of whom were operating illegally, want to make a quick buck without any concern for the children’s health.

Under the Local Council Guidelines, such street vendors are not allowed to trade outside schools.

A street vendor sells flavoured coloured drink from the back of a van outside a school in the Subang Jaya municipality.

“I do not have a trading licence as I do this as a part-time business.

“I will move away when I see the authorities approaching me,” he said, adding that the Shah Alam City Council (MBSA) enforcement officers had once seized all his goods.

“It is tough but I need to earn extra money,” he said.

School principals in Klang, Shah Alam and Petaling Jaya who spoke to StarMetro admitted that they had no control over what the children ate outside the school compound.

They said their teachers had taught the children good eating habits, but children being children were easily taken up by colours and sweet stuff.

The principals also said that they did not want to engage with the street vendors as some of them could be thugs.

A street vendor selling food from a car boot outside a school in the Subang Jaya municipality.

“Under the Health Ministry guidelines on food and drinks sold outside the school gate, street vendors are banned from selling their goods within a 40m radius of the school gate or fence,” he said.

He added that the ban applied to static and mobile traders as well as those with temporary trading licence.

Huee said children need nutritious food containing minerals and vitamins essential for their physical growth and building up their strength against diseases.

“Young schoolchildren who consume unhealthy foodstuff are prone to diseases.

“Artificial colours, sweet carbonated drinks and fried food satisfy their appetite but are not nutritious.

“Due to the eating habits, they become physically weak and are not mentally sharp,” he said.

Devadass said the Health Ministry and the Domestic Trade and Consumer Affairs Ministry must work together with the local authorities to clamp down on food being sold outside school grounds. —Photos: SHAARI CHEMAT/ The Star

“Our local authorities must act quick to halt the sale of foods with excess sugar and salt, and artificially coloured drinks.

“Compound notices must be issued and vehicles must be seized.

“We cannot be lenient on this matter as the problem still persists despite being brought up time and again,” he said.

Klang Municipal Council enforcement chief Andry Arman Masrom said the council’s enforcement team did conduct spot checks for street vendors outside schools but due to lack of manpower, it was difficult to cover all schools.

“Sometimes it is a cat-and-mouse game.

“Street sellers speed off on seeing our enforcement entering the roads.

Andry Arman added that from January to April this year, 16 vending carts were seized and nine were foreigners.

Only 11 compounds were issued.

“In 2015, we had compounded 29 street vendors, trading outside schools where the compound notices issued were RM300 each.

“We work with various schools to stop such hawkers from fleecing the children” he said.

“We need to get school students to shun such junk food and the drinks,” he added.

She suggested that a list of unsuitable food under the school canteen guidelines be included in the prohibited food for school children list.

“Only than can stricter action be taken at the local authority level,” she said.

Klang Consumer Association president Devadass Anjan said the Health Ministry and the Domestic, Trade and Consumer Affairs Ministry must work together with the local authorities to clamp down on food being sold outside school grounds.