THE DELIVERY of home-prepared lunchboxes are now becoming more popular in Ipoh.

This will probably be good news to those inundated with work and unable to get out from their offices for a quick meal.

A quick search on Facebook shows several delivery services that are available to people working or staying in the city.

Many of the services work by informing their customers through Facebook about the menu of the day and taking in their orders before a certain time to allow the food to be prepared and later delivered.

Healthy Meals owner Ryan Teh said he started the business that prepares the food for gym goers with two other people, including the chef.

Teh, 28, said he was a former gym trainer and feels that gym goers need the right diet to properly shape up and stay fit. Spaghetti with salmon flakes bento with some side dishes including fruits. While it originally targeted gym goers as its customers, the service has started receiving orders from people recovering from illnesses.


“It’s quite hard to balance between a proper meal and training for gym goers, especially if they need to go back home to prepare special meals on their own,” he said, adding that the operation started in April.

“We feels gym goers need a balanced meal with carbohydrates and proteins,” he added.

Teh said word then got out about the healthy meals being delivered to customers’ doorsteps.

“We then began to get calls from non-gym goers and we are now delivering our food to office workers, doctors, nurses and other professionals working in the city.

“We also get calls from patients who are recovering from cancer and other illnesses that need healthier meals,” he said, adding that their area of coverage included Pengkalan, Tasek, Silibin, Menglembu and Bercham.

“We limit our orders to about 200 meals a day. This allows us time to cook, to rest and to prepare for the next day,” he added. Teh said there were a few issues with the food when their operation started.

“Because we are not using any salt, sugar, MSG and artifical flavouring and only use natural ingredients in our meals, we’ve gotten some comments that they are not for everyone.

“But based on these comments, we then started to think about how to improve the food and its taste. We didn’t even put any gravy in the beginning and some food was just hard to swallow,” he said with a smile.

“Since then, I can say that we’ve improved a lot and are getting a steady stream of calls from customers,” he said.

Teh said their meals come in the form of a bento set with different types of food every day.

“We serve things like brown rice, spaghetti, chicken, salmon, rib eye, shrimp, pita bread and sandwiches,” he said, adding that food preparation starts as early as 4am and delivery at 11am.

“We also prepare daily specials on selected days,” he added. 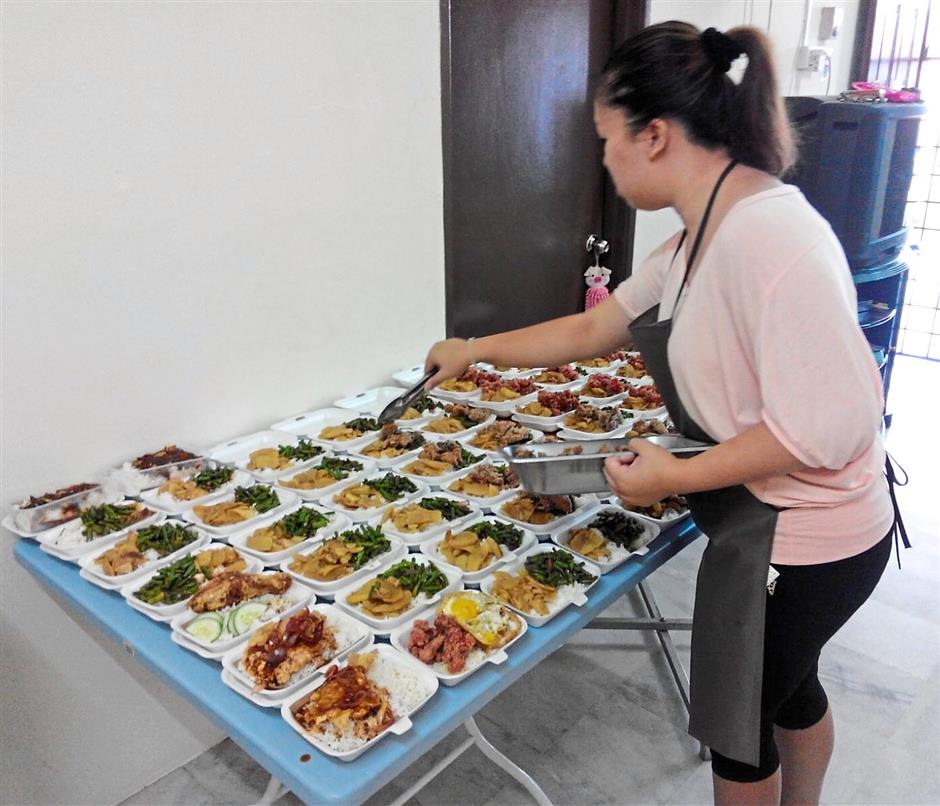 Toon runs Lunch Box Courier, which specialises in economy rice, with her husband.


Lunch Box Courier owner Albie Toon, 28, said she started the business of cooking and delivering economy rice to customers with her 33-year-old husband Arcus Lau about three months ago.

“My husband is a cook and he worked in Singapore for more than 10 years.

“He came back to Ipoh four years ago and we used to sell economy rice,” she said.

“We stopped after the restaurant owner wanted a chicken rice stall instead, so we continued our business through social media,” Toon said, adding that she also takes down orders through messaging app WeChat and phone calls.

“We don’t deliver to the city centre though because we are worried of getting stuck in a traffic jam during lunch hour,” she added. 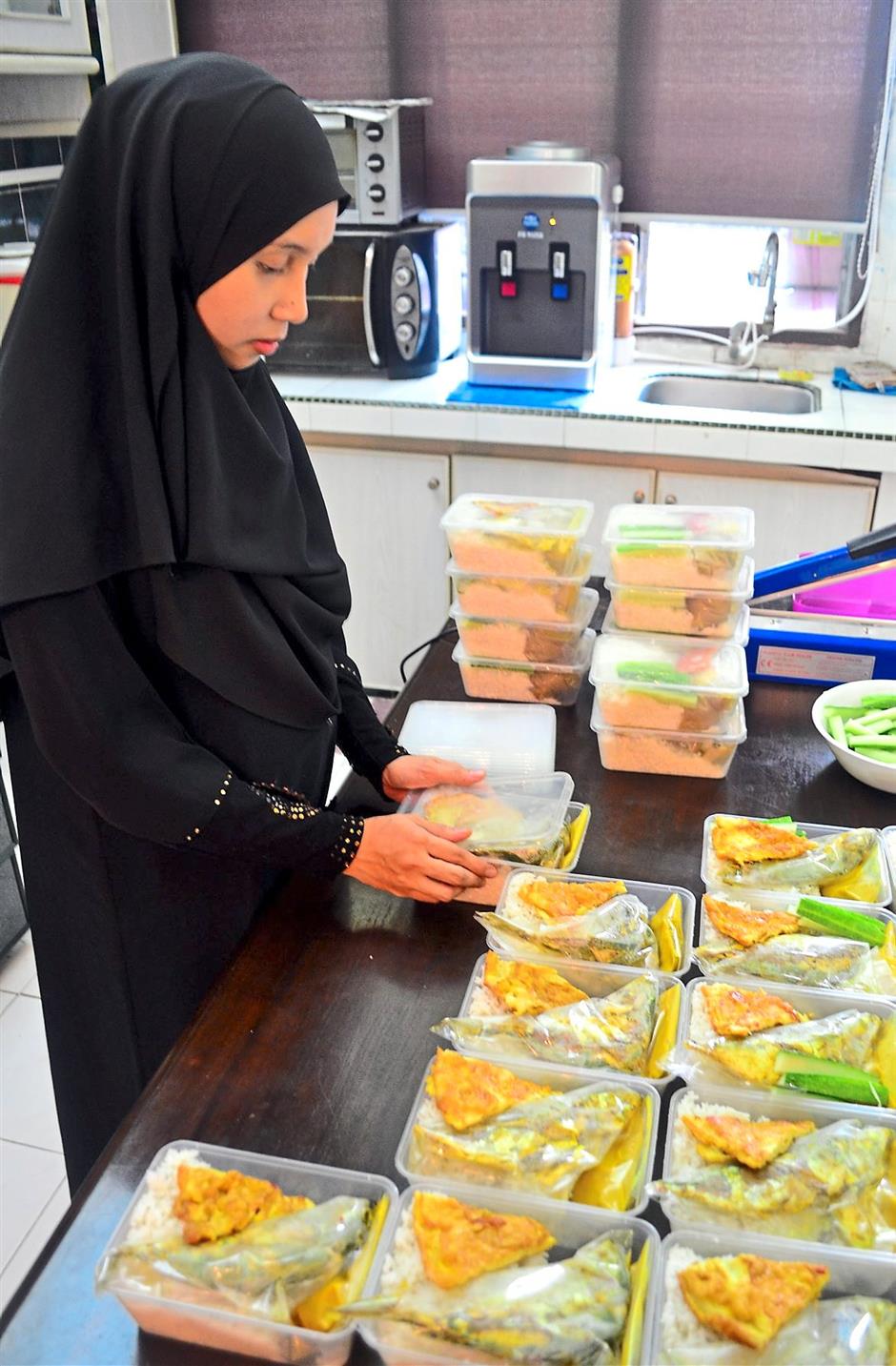 Ready to go: Siti Nuradzra packing the food in containers at her home before having it delivered to her customers by her husband.


Toon said the business is starting to grow as word of mouth spreads.

“We used to only get orders of between 10 and 20 packs of rice daily.

“My husband and I source for cooked spiced chicken, meat or fish from some restaurants and we will package these together with our home-cooked rice and side dishes.

“There will be different sets of meals daily,” she said, adding that her husband Zaid Anuar, 29, handles the delivery side of the business.

“Sometimes, we also prepare spaghetti and we will cook and prepare our very own special Nasi Arab during the weekends,” she added.

Siti Nuradza, originally from Negri Sembilan, said her started the service about a month ago and has been getting lots of positive feedback.

“Our customers are mostly office and hospital workers.

“When we first started out, we only received orders for 10 packs daily. As word got out about our service, we are now getting between 100 and 200 packs,” she said.

Siti Nuradza said she and Zaid used to run a restaurant.

“It did not go well and closed down after about a year.

“Most of our money was spent on the restaurant and we just could not sustain it with the high overheads,” she said.

She and her husband have been living in Ipoh for about three years.

“I then started to think about doing other types of less risky businesses and thought about a food delivery service,” she said.

Siti Nuradza said they only do free delivery within the city centre.

“We will start packing the food at 9am and start delivering at about 11.30am,” she said.

“We will first do the delivery in the city then to other areas,” she added.

Siti Nuradza also hopes to expand her business in the near future.

“I’ve set a three-month target to get more business and to have two people to do the delivery,” she said.

Nadhirah said the business just started a month ago.

“My mother used to bake cookies while I did cheese cakes and had these delivered to our customers.

“We felt we could earn extra money if we also delivered lunches,” she said.

Nadhirah said they were inspired by her brother-in-law, who came from Pakistan, after finding out there were not many Pakistani restaurants here.

“We specialise in Pakistani briyani rice. We are planning to expand our menu with more offerings and maybe also do dinner.

“My mother and I do the cooking while my brother and husband handle the deliveries,” she said, adding that their delivery areas are mostly near Gunung Rapat and Medang Gopeng.

Nadhirah said as the business only started recently, they are receiving between 20 to 30 orders.

“We can take up to 50 orders . We can only cook and prepare so much at the moment,” she said.

Delivery, she said, is done between 11am and 2pm while the preparation work begins at 8am.

“We are doing this daily from Monday to Sunday,” she added.