THE old Prangin market or popularly known as Sia Boey (Town’s End) in Penang will be transformed into a premier art district in the country with a Light Rail Transit (LRT) line cutting through the 2.2ha site for easy access for the public.

Chief Minister Lim Guan Eng said the area would be the focal point for the community.

“Under the Penang Transport Master Plan, there will be an LRT line cutting across this heritage and art district,” he said.

He said this in his speech yesterday before witnessing the signing ceremony between the Penang Development Corpora-tion (PDC) and Yayasan Haji Zainuddin to set up a new iconic art museum, Ilham Penang.

It was earlier reported that Sia Boey had been designated as the site for the central LRT station.

It includes the RM30mil Ilham Penang, which Lim described as a catalyst for culture-led urban regeneration in the historical George Town.

He said the PDC had granted Yayasan Haji Zainuddin a 30+30 year lease on a 0.6ha land.

In return, Yayasan will invest RM30mil to build and cover the cost of its operations and maintenance over the period of time.

The art museum will have at least 45,000sq ft of gallery space which will be the largest of its kind in Malaysia.

Lim said in addition to gallery space, the museum will offer a café or restaurant, a library, a 200-seat auditorium and art storage facilities.

The museum will be free for school-going children while adults will only have to pay a nominal fee.

“Upon completion, Ilham Penang will certainly go a long way towards making Penang an international destination of choice.

“More importantly, in the times of economic slowdown and uncertainty, Ilham Penang will be a catalyst for urban regeneration,” he said.

Lim said he had personally taken a trip to South Bank in London to check out the Tate Modern gallery.

“It used to be an abandoned area where you will get mugged or robbed.

“Even taxi drivers dare not take you to that place. But today, it is the hippiest and coolest place in London.

“It brings in urban regeneration and that shows art can also be an economic catalyst and driver.

“Hopefully, this project will launch Penang into another dimension,” he said.

Lim said the state government could have easily converted the site into another RM500mil commercial and residential development project.

“But do we want another concrete jungle? We want to do something that is good for the community and create a centre for heritage and arts for our children,” he said.

In conjunction with the launch, there is a public exhibition at the Prangin Market till Sept 13.

It is aimed at celebrating the past, present and future of Sia Boey. The exhibition features the rich history of Sia Boey and future plans for the historical site. 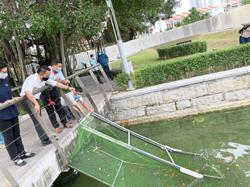