Going behind the scene of puppet show

Shadow play: Murshid showing Audrey and Muhammad Darwish Hakim, seven, how to manipulate a puppet behind the screen. (Below left) Loke Wai Peng, 35, helping her daughter Janice Chin, five, to make a puppet during the workshop at Queensbay Mall. Photos: CHIN CHENG YEANG

LAUGHTER filled the air at the Queensbay Mall’s central atrium when the children and their parents sat down to watch the wayang kulit (shadow puppet theatre) together.

Puppeteer Murshid Md Hussain, who has been performing wayang kulit for the past five years, said it was easier to perform in front of the kids as they are more curious and have high imagination.

“But we can’t perform historical stories as they may not understand them,” he said after his recent 30-minute performance at the mall in Penang.

Murshid said he would usually try to incorporate his surrounding situations into his play to grab the audience’s attention.

After the performance, some 50 children and their parents took part in a puppet-making workshop. 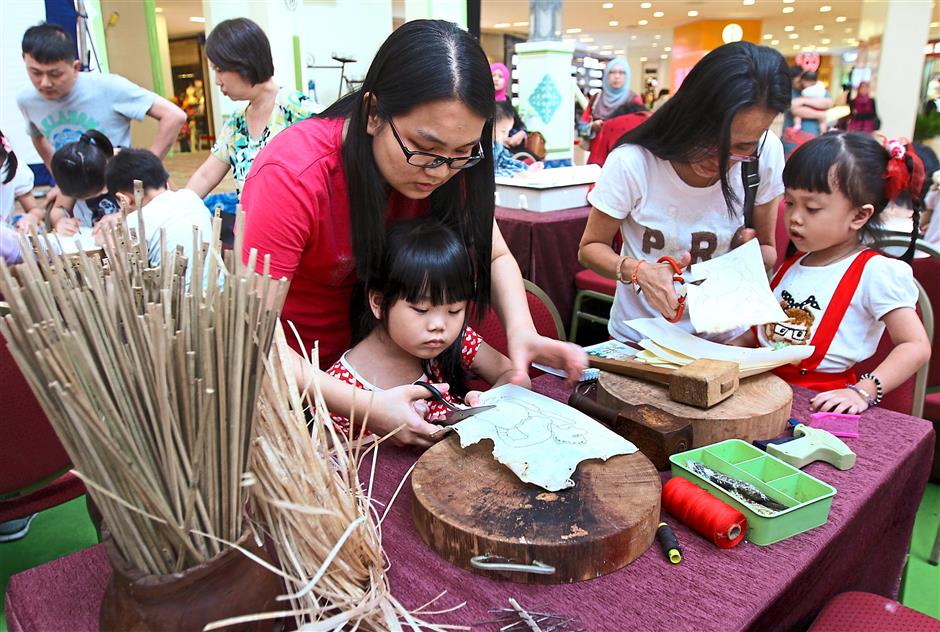 During the 90-minute free workshop, they were guided step by step on how to make the puppets.

After the workshop, Audrey Chong, six, was seen eagerly making her own puppet.

“This is my first time watching a puppet show and I’m excited that I get to make my own puppet now,” she said.

The mall’s marketing communications executive Jamie Yap said the mall had been holding cultural-based programmes to create awareness among the public on the various cultures in Malaysia.

“We provide this workshop so that the public can understand more about the show and how the puppets are made,” she said.