Anjung Tawas Impiana owners find many defects in their units

Please help us: Anjung Tawas Impiana residents handing over their list of complaints to Kulasegaran (right).

HOUSEBUYERS in Anjung Tawas Impiana in Tasek are up in arms with the developer of the housing project over shoddy construction work.

Its residents association chairman R. Raj Kumar said there were a total of 79 double-storey houses including four semi-detached units, which the residents had purchased for RM398,000 each.

He said the residents had received their keys to their gated- and-guarded homes about six-months ago.

“However, after some of the housebuyers moved in, they found that their units had many defects. See this: A resident of Anjung Tawas Impiana showing the wet patches at the front porch.

“At almost all of the units, the ceiling of the porch area, bathrooms, and even at the master bedrooms are leaking, with flooring defects, and wooded beams not removed after the completion of construction works.

“The list of grievances is long, and for the past six-months we have made numerous complaints to the developer but to no avail,” he said during a meeting with Ipoh Barat MP M. Kulasegaran on Saturday.

The affected residents who had moved into their units were also present at the meeting.

G.N.P Thayalan, 43, one of the unit owners who is paying a heavy price for the shoddy work, said the developer had promised that the beams would be 1.6m-long at the ceiling above the kitchen area but that he had discovered that the beams were 2.4m-long.

Thalayan, who is involved in the construction business, said the toilet in the master bedroom, which is situated above the kitchen area has been leaking ever since he moved in. 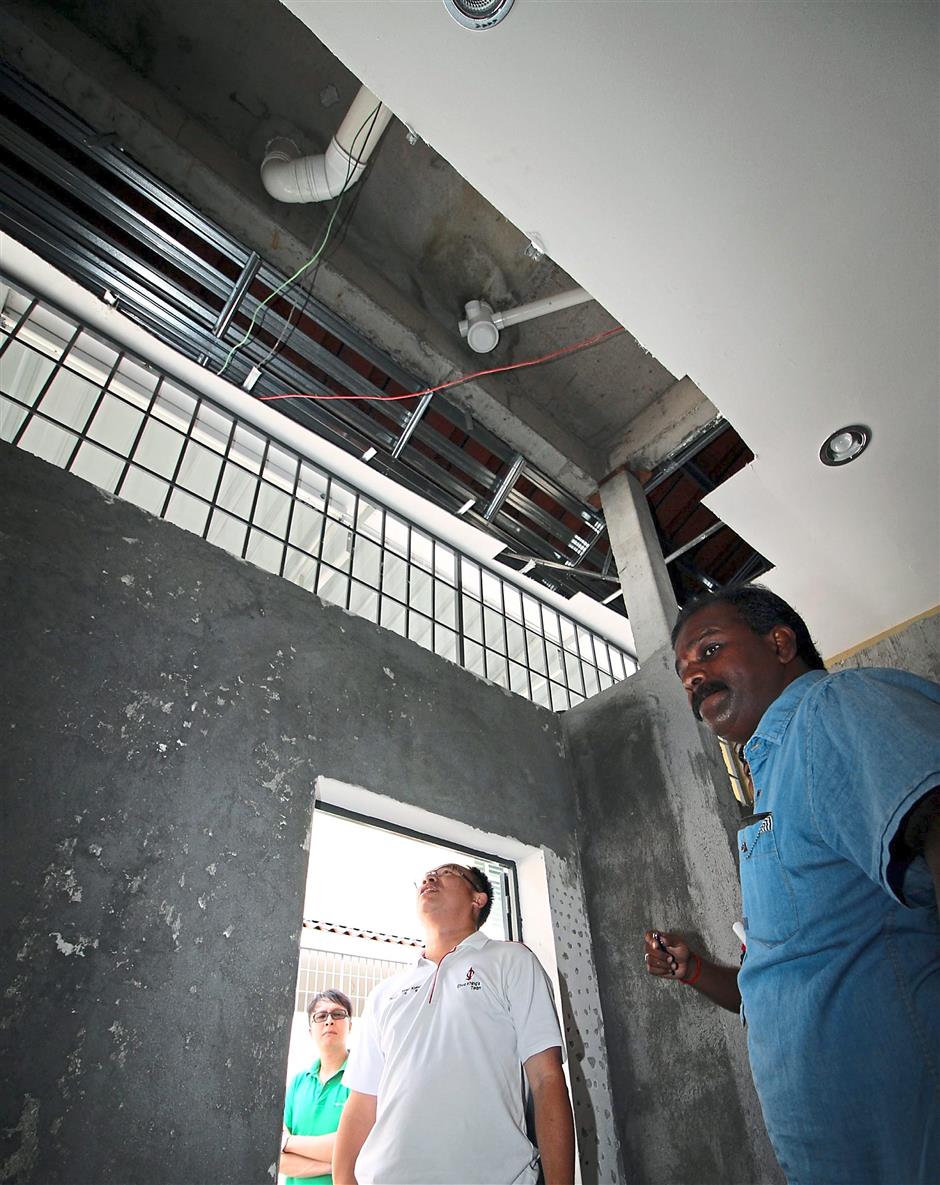 Additional cost: Thayalan (right) showing the pillar he had fix to support the upstairs bathroom.

“I have informed the developer about the problems that I was facing and they sent their contractor to carry out repair works but the problems have yet to be rectified until now.

“I was so fed-up with their attitude that I decided to call my own contractor to solve the problem as I am worried that the beam could give way due to the leak.

“While my contractor was carrying out repair works, he found a 1.8m-long piece of wood as the beam holding the entire structure. I was shocked to see this,” he said, claiming that he needed to fork out RM68,000 for the repair works.

Another house buyer Joyce Lee, 38, a sales executive, said her major problem was the leakages over at her unit’s porch, her dry kitchen and master bedroom.

She said during rainy days, she and other residents suffered major headaches because their porch and other affected areas would be filled with water.

“I have informed the developer about the problem and they claim they have rectified the defects but I don’t see any difference as the problem still persists.

“There was a crack starting from my balcony right up to the ceiling of my porch, and when I informed the developer, he sent his contractor who plastered it with water-proof glue, which not only did not work, but has made the ceiling look ugly.

“The developer and the contractors appointed by them are just doing a shoddy job on the surface, and are not actually getting to the root of the problem,” she said, adding that residents have been short-changed on the quality of work. Lee: ‘During rainy days, the porch and other affected areas would be filled with water.

Kulasegaran said since the area was under the jurisdiction of the Tambun constituency, he would bring the matter up with the Second Finance Minister Datuk Seri Ahmad Husni Hanadzlah, who is also the Tambun MP during the Parliament session.

He said in the meantime, the house buyers should write to the lawyers not to release the balance amount of the money to the developer, until rectifications were carried out properly.

“Put up banners informing people not to buy the remaining available units as they are full of defects, and give the developer 14-days before going to the Housing Ministry for further action. I will try to get the developer to attend a meeting with the residents first to iron out issues,” he added.

Attempts to reach the developer failed.