Liverpool in ‘must win’ clash at Tottenham Hugo Lloris could have a telling influence on tomorrow’s clash with Liverpool. — Reuters

LIVERPOOL’S game at Tottenham Hotspur Stadium tomorrow is one that they hope will kick-start their league season and bring it in line with where they feel it should be knocking around near or at the top of the table.

To some extent, Spurs will feel the same, despite the fact that they were not expected to achieve as much as Liverpool were touted to at the beginning of this campaign.

So, when these two sides, considered among England’s Big Six, lock horns in London in the late game tomorrow, there should be no short measure of determination to triumph, nor desire to make the point that they quite rightly belong among Europe’s leading clubs.

Sadly, though, both camps will be without key players, sidelined by injury. And perhaps Spurs will feel it more, with their South Korean star Son Heung-min hurt in their Champions League victory over Marseille in midweek.

With the win, Tottenham qualified for the knockout phase of the competition. But Son left the pitch before then and was reportedly set for surgery after fracturing an eye socket.

With three weeks to go, the injury threw his participation in the World Cup into doubt.

Spurs’ talisman, and England captain Harry Kane, and goalkeeper and French skipper Hugo Lloris both spoke boldly and passionately in the wake of their last-16 qualification in Europe’s elite cup competition.

Alluding to their fightback from a goal down in Marseille as a turning point to more consistency in the league, they will be hoping a win tomorrow puts their waywardness behind them and leaves the club with a legitimate chance to emerge as contenders at home and in Europe.

Liverpool’s ambitions will be similar, but they will also be somewhat more desperate.

Of the Big Six, they are ninth on the table – Spurs are third.

The Anfield side trail their hosts by no fewer than 10 points, but with a game in hand.

Putting a finger on just what Liverpool’s issues are this season is difficult because this team can, and has played some excellent stuff since August.

In the same breath, they have been as woeful as they were in the sorry days when it took almost three decades to win the league title again.

Mohamed Salah and Darwin Nunez got the goals that saw off Napoli in the Champions League clash at Anfield in midweek.

And it will be these two forwards who Jurgen Klopp’s side will be keen to see lead them past Tottenham, who can be stubborn.

Nunez, given his absence through suspension recently, has yet to get a good run in the side, hopefully with a handful of goals to go with it when he does.

Salah at last seems to have found the sort of form that convinced Liverpool to extend his contract and pay him ever so handsomely for it.

The predominantly left-footed striker, who will not be at the World Cup (Egypt did not qualify), will certainly be one to watch.

When he is in full flight, Salah is among the best players at the very top of world football.

With the strengths and ambitions of these two teams, the outcome of tomorrow’s encounter may well be decided by the odd goal, scored maybe through a mistake or mishap in defence, or maybe some wonder strike.

Both attack-minded sides have loads of talent and pedigree upfront, so one would expect a goal or more to be scored by each.

And at face value, it is Liverpool who need victory more than the other in this one.

But will they win it? 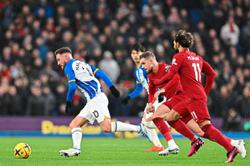