Kai Havertz has been in good form for Chelsea and will be hoping to continue it at the Etihad today. — AP

JUST as fate would have it, in the same week that Manchester City reaches their first Champions League final and Chelsea their third, these two Goliaths of English football will clash in the Premier League.

And unsurprisingly, today’s coming together will bring to bear a great deal more than merely who will emerge with a psychological edge ahead of the Champions League final at Ataturk Olympic Stadium in Istanbul on May 29.

For City, it could be a glorious crowning. If they beat Chelsea at the Etihad today, they will have won the most coveted title of all in British football and perhaps of all club football, for a third time in four years — and a fifth in the last decade. That is sheer dominance.

Three points today would give Pep Guardiola’s squad an unassailable lead over their bitter cross-town rivals Man United, and really rub their noses in it.

It would also silence their critics, who so boldly and prematurely wrote off Man City when they were in 11th place in November and trailed the then leaders Tottenham by eight points.

When you bring into the equation the fact that City won the League Cup, England’s first piece of silverware of the season, only a fortnight ago; one can imagine the pain and suffering the Old Trafford faithful must be feeling.

The red half of Manchester have not been in a Champions League final for 10 years, the same amount of time it would have taken City to win five Premiership titles. Neither have Man United won the league since 2013 — eight sorry years and counting.

Even if City do not beat Chelsea today, they could still clinch it if the Red Devils stumble at gritty Aston Villa tomorrow.

As it is, a victory for City against Chelsea is by no means a foregone conclusion, not in the least bit.

Chelsea, who beat City in the FA Cup semi-finals, put paid to Real Madrid’s Champions League ambitions with a 4-1 aggregate win in the semi-finals, highlighted by the comprehensive defeat of the Spanish side in midweek.

In the quarter-finals, they eliminated Porto, knocked out Atletico Madrid in the last 16 and topped their group in the earlier stages of the tournament.

In the Premier League, they are fourth, holding on to an automatic qualifying place for next season’s Champions League. They are three points ahead of West Ham in fifth spot and five in front of Tottenham — all with only four games to go.

A win for Thomas Tuchel’s Blues in Manchester could prove pivotal to finishing in the top four and help exclude the thought of having them to depend on victory in Istanbul for qualification for Champions League football next season.

At any rate, the way in which Chelsea took Real Madrid apart in the two-legged semi-finals, clearly shows that they are playing with tons of confidence and might yet do the same to City, should their hosts let their guard down.

Tuchel has transformed Chelsea since taking over in January and achieved it mostly by toughening up the defence and letting his attack run free.

The re-emergence of Antonio Rudiger and Cesar Azpilicueta under Tuchel has had a massive bearing on how solidly they have held up the backline.

In similar fashion, Kai Havertz, Timo Werner and Christian Pulisic have grown in stature in attack since Tuchel arrived at Stamford Bridge and illustrated this nowhere better than against Real Madrid.

City though, are in fine form themselves. They have scored at least two goals in five of their last seven matches across all competitions and look every bit like champions.

Riyad Mahrez, IIkay Gundogan, Kevin De Bruyne and Ruben Dias are the backbone of this elite and cohesive unit, along with goalkeeper Ederson, who will be hoping to wrap up the league title today and turn their attention to the Champions League final — the showpiece that brings the curtains down on continental club football. 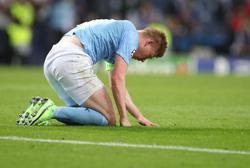