A NUMBER of people who were inoculated under Selangor’s vaccination programme (Selvax) have not received their digital certificates although it has been months since they were given two doses of the Covid-19 vaccine, says Selangor MCA.

He said checks on social media showed that a number of people were experiencing the same problem.

Currently, only Health Ministry produces the digital certificate through the MySejahtera app.

He said the complaints included overlapping of vaccine appointments from Selangkah and MySejahtera.

“This has created confusion among those who are supposed to receive their jabs,” he said.

Another issue he highlighted was differing information displayed on the apps.

“There were cases where the details stated on MySejahtera did not match the data provided by Selangkah,” he said.

They also called on Selangor government to explain the implementation of the state vaccination programme.

“The state government and the Mentri Besar should explain to the public why the cases are still high in the state.

“Selangor recorded an alarming number of cases in July and August although vaccination for industry and community was already implemented then,” said Hoh.

They urged the state government to rectify the problems as soon as possible. 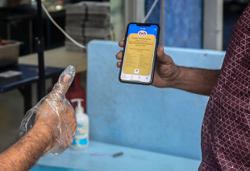