Real Madrid has plans to launch its own theme park in Dubai.

The Spanish club announced a deal with Dubai Parks and Resorts on Thursday to build a Real Madrid theme park to be inaugurated "in the final quarter of 2023.”

The 14-time European club champion said the park will feature "Real Madrid-related attractions,” including "a museum, amusement rides and games of footballing skill” in addition to shops.

Fernando Eiroa, CEO of Dubai Holding Entertainment, told the club website: "We are delighted that Real Madrid has chosen Dubai Parks and Resorts as its partner in our quest to bring the best international entertainment brands to the region.”

Dubai Parks and Resorts runs a Legoland park and theme parks inspired by the Hollywood and Bollywood film industries. - AP

Talk about money before holidaying with friends, or regret it later 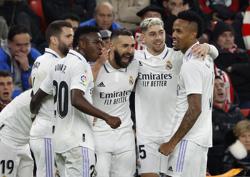