Can you name some of Malaysia's most popular traditional dances? 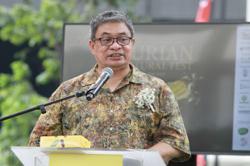 Zapin is a traditional dance that could be traced back to the Middle East. — Photos: Filepic

Malaysia is home to many ethnic groups, each with its own unique culture and traditions. One of the ways this rich heritage is celebrated here is through traditional performances.

Take Sarawak and Sabah for instance, which are estimated to have over 60 ethnic groups. This translates to the island of Borneo being a melting pot of a variety of colourful cultural songs, dances and costumes.

Sarawak, the largest state in Malaysia, has over 40 sub-ethnic groups alone, making its demographic particularly distinct and unique compared to the states in Peninsular Malaysia.

The Sarawak Tourism Board (STB) said there are 45 different dialects in the state, and each group has its own unique stories, beliefs, traditions and cultures.

And this unique art and heritage have even transcended borders in recent times.

“The Orang Ulu, or ‘people from upriver’, comprise of different tribes such as the Kayan, Kenyah, Lun Bawang and Kelabit. Their exotic art and music has spread internationally, as seen in the growing popularity of the boat lute or sape,” STB said on its website.

The sape, according to the state tourism agency, has become the symbol of one of Malaysia’s largest music events – the Rainforest World Music Festival. This is an annual event in the state that features world music artistes from all over the globe. After a two-year hiatus (because of the pandemic, of course), it was finally held again in Kuching last month.

More than just a source of pride and heritage, traditional performances also have the potential to lure tourists, both locally and from abroad. Song and dance are a form of intangible cultural heritage that also double as fascinating tourism magnets.

It was something that Professor Dr Hanafi Hussin, associate professor at Universiti Malaya’s Department of South-East Asian Studies, discussed in a 2018 journal paper titled Branding Malaysia And Re-Positioning Cultural Heritage In Tourism Development.

“Malaysia has formed various cultural policies and institutions to promote culture and cultural practices. Tourism is a prime purpose behind all these initiatives; however, these were also meant to unite different ethnic groups,” he wrote.

He highlighted how Tourism Malaysia has included traditional performances in its promotional videos. The seven-minute-long Essence Of Asia video featured the Alu Alu and Rejang Be’uh dances (both from the Melanau and Bidayuh communities of Sarawak, respectively) as well as the Zapin Sindang dance (from the Malay community in Sarawak).

Earlier this month, it was reported that Malaysia’s cultural sector contributed RM261.3mil in the national revenue last year. And stakeholders are taking notice of its big potential.

The role of Maken, which was established in October last year, is to give advice, views and suggestions to the ministry on the development, progress and strengthening of policies related to arts, culture and heritage.

Nancy said a total of RM50mil has been allocated for rehabilitation purposes under the support grant for the tourism and cultural sectors.

Of that amount, RM25mil is reserved for the cultural sector.

There is, however, a decreasing practice of traditional performances in Malaysia, warned researchers Professor Joseph Gonzales and Imran Syafiq Mohd Affandi.

In their 2021 academic paper titled Forging Traditional Dance in Malaysia, the duo found that traditional dances are increasingly less practised, especially among the younger generation.

“The traditional dances that are practised in Malaysia reflect the diverse ethnic constitution of the nation of 35 million people. This breadth of dance genres includes dances of the indigenous peoples, and the migrant communities that have settled in Malaysia for more than six centuries.

“However, with the passage of time and urbanisation, these traditional dances are increasingly less practised and becoming seemingly irrelevant in the lives of the younger Malaysians, who are more fascinated by K-Pop and other popular genres,” the research paper read.

Prof Gonzales is a well-known choreographer and an expert in the interpretation of traditional dances in Malaysia. He is the founder and artistic director of ASK Dance Company, and is currently the head of Academic Studies/Dance Programme Leader at The Hong Kong Academy for Performing Arts. Imran, meanwhile, is a professional dancer who is part of the ASK Dance Company.

In their research, they cited other factors that have led to the decreasing practice of traditional dances here, such as mass migration to urban centres and contrasting philosophical ideas.

“Large percentages of the population moved to the cities in search of work, with the intention to elevate the financial status of families whose sources of income moved from agriculture to manufacturing and industry. In the process, folk art that was very much a fabric of village communities has become more obscure,” the paper cited.

The Covid-19 pandemic, according to Prof Gonzales and Imran, also disrupted artistic plans and finances for the cultural arts sector.

In ensuring the continuity of traditional performances, the duo said it takes collaboration between various stakeholders to secure success.

They added that when it comes to the preservation and propagation of traditional dance, the task is so big and too important that “no one person or organisation can take on the responsibility by themselves”. Hopefully more stakeholders understand this and initiatives are taken to address the issue.

On the travellers’ side, what they can do to help the situation is to just enjoy the various traditional performances in Malaysia. Many travellers today are savvy enough with technology and social media that one can almost guarantee that some videos or pictures of the dances they see will be uploaded on platforms like Instagram and Facebook.

This, in turn, has the potential to spread information to future visitors. And when there’s a demand for such performances through cultural tourism, the revenue generated can help to sustain performers and the industry at large.

We take a look at some unique cultural performances in Malaysia. Ngajat today is better associated with the celebration of bountiful harvest.

Synonymous with Hari Gawai in Sarawak, Ngajat is a group or “family” of dances with roots that can be traced back to the 16th century. It is believed that the dance was performed by brave Iban warriors upon their return from battle.

Today, the dance is better associated with the celebration of bountiful harvest and to welcome guests to longhouses. Male dancers usually clad in “gagung” – an armour-like ensemble made from animal hide – while donning a majestic headgear traditionally made from the feathers of a hornbill’s tail.

The women, meanwhile, are dressed in an elaborate headdress, chains and an intricately woven dress.

There are several iterations of the Ngajat dance, with some of them only performed by either male or female dancers. These include Ngajat Induk, Ngajat Bebunoh and Ngajat Pua Kumbu, just to name a few.

Ngajat performed by men usually consists of precise body movements while for women, the movements are more graceful. The Datun Julud of the Kenyah people in Sarawak is a dance that’s performed by the women of the tribe.

The Datun Julud of the Kenyah people in Sarawak is a dance that’s performed by the women of the tribe.

The dance – which symbolises happiness and gratitude – is believed to be created by a Kenyah prince called Nyik Selung. It was performed in the past to greet returning warriors.

Datun Julud is also referred to as the Hornbill Dance as it features fluid motions akin to the bird taking flight. The dancers, dressed in a colourful sarong and carrying a fan made from hornbill feathers, weave graceful movements while keeping their head erect. This is to prevent the heavy ornaments decorating her earlobes from swaying too much.

The dance is usually accompanied by the sounds of the sape, a musical instrument that’s traditionally associated with the Orang Ulu community. Like many traditional performances in Sarawak, the dance today is usually performed during the harvest festival.

Also known as the Bamboo Dance, Magunatip is an energetic dance performed by the Murut people of Sabah. It’s a rhythmic performance that requires agility (and focus) on the part of the dancers.

In the dance, performers hop in and out of clapping bamboo poles. Magunatip requires precision as the slightest misstep could see the performers tripping or getting their feet clapped by the bamboo poles!

Magunatip today is an important cultural heritage in Sabah. It’s usually performed during cultural events and festivals such as Kaamatan or Harvest Festival, and is one of the more popular dances among tourists who are curious to test their fancy footwork. 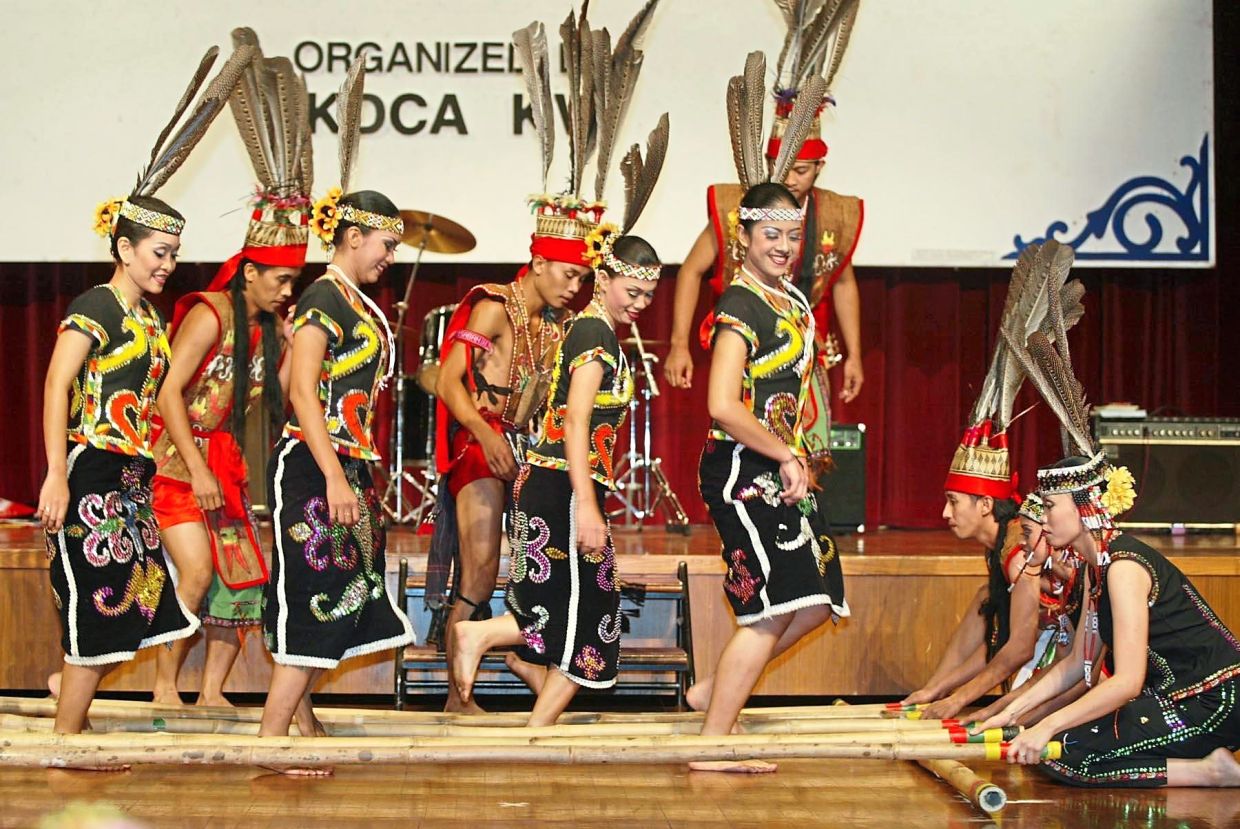 Tourists are often fascinated by the Magunatip dance, which utilises bamboo poles.

An integral part of the Malay performing arts scene, Zapin is a traditional dance that could be traced back to the Middle East. It is believed that the musical form was introduced here by Persian and Arab Muslim missionaries around the 14th century. This explains the Persian-like melodies that accompany the performance.

In the past, the dance was only performed by men. Nowadays, female dancers are included in the performance too.

Despite being performed exclusively for religious ceremonies in the past, Zapin today has been accepted as secular form of traditional entertainment.

Zapin is best associated with Johor, but it’s also popular in the states of Pahang and Selangor. There are reportedly over 20 variations of the Zapin, and each type distinguished by the movements and style of dance.

Some of these include Zapin Melayu Johor, Zapin Pulau and Zapin Selat Panjang. Lion dance in Malaysia is a gravity-defying performance.

Despite its roots tracing back to China, lion dance here has evolved to become uniquely Malaysian over the decades. So much so that the local lion dance was listed as a national cultural heritage of Malaysia in 2007.

On local shores, the performance has climbed to great heights literally, with the inception of high-pole lion dance.

In Malaysia, the dance today is considered a fine display of acrobatic performance. It’s not uncommon to see lion dance here with segments that incorporate gravity-defying pole jumping. The act of climbing these poles is associated with reaching greater heights and prosperity for individuals and businesses.

In Sabah, you can even find dance troupes that merge the Magunatip into their lion dance routine!

Although typically performed during the Lunar New Year, lion dance can also be viewed at official functions such as new business launches.

Traditionally, though, a lion dance is performed to ward off bad luck. The dance is usually accompanied by roaring firecrackers.

Brought to Malaysia by the Sikh community, Bhangra is a lively dance form that originates from the Punjab region of India. It is traditionally associated with the season of harvesting.

In modern times, however, the Bhangra dance is performed at weddings and parties. Its fun and energetic beats make it an instant crowd favourite at any gathering.

A signature trait of the performance is the presence of the dhol drums which powers the dance. Performers typically dance to the beat of the dhol drummer who shift the melody from relaxed to upbeat.

If anything, performers need to have an abundance of energy as the dance involves vigorous movements and sometimes, for an extended amount of time.

In fact, some gyms even incorporate Bhangra dances into their fitness classes! The energetic beats make Bhangra an instant crowd favourite at any gatherings.

Boat cruises to dune tours: The best things to do on holiday 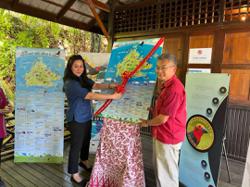