The writer (front) and his travel buddies enjoying a canoe ride in beautiful Taman Negara, aka ‘paradise on Earth’. — Photos: LEESAN

Did you know that forests make up approximately a third of the Earth’s land area, or 4.06 billion hectares? And 54% of all forested areas in the world can be found in just five countries: Russia, Brazil, Canada, United States and China.

The world’s forests are scattered across four major climate regions too – boreal, temperate, tropical and subtropical. Of these, 45% of the forests are tropical rainforests, including those in Malaysia; Peninsular Malaysia actually has the oldest rainforest on Earth.

Rainforests also form the most expansive and vital habitats for the world’s bio-resources as well as freshwater and oxygen generators.

Unfortunately, only 20% of the world’s forest areas are classified as permanent biological, water source, and land protection areas.

You might be even more shocked to learn that not all forested areas of our world are public properties as some 73% belong to national or political bodies, while 22% are privately held. In South America in particular, 33% of the forests are private properties that are out of bounds to outsiders.

As a matter of fact, 80% of the world’s living species have to rely solely on the forest ecosystem for survival. Forests are the habitats and homes for 60,000 species of trees, 80% of amphibians, 75% of birds and 65% of mammals. They are playing a superiorly important role in reducing carbon emissions and mitigating climate change, providing sustainable food to the people while reducing starvation and poverty. 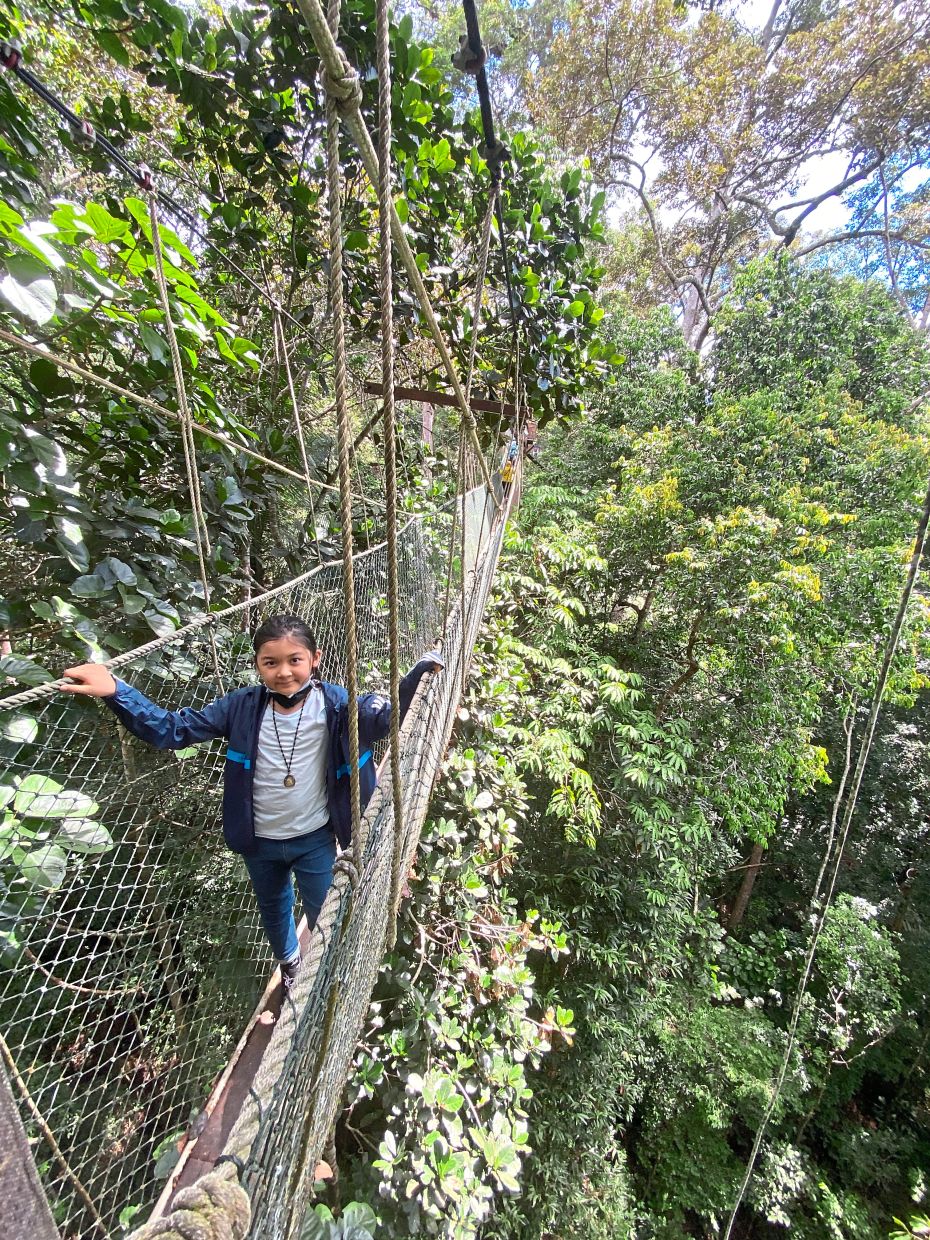 Teach the young ones to enjoy and appreciate the beautiful gems that Mother Nature has given us.In view of this, we must do our utmost best to stop deliberate felling of trees for the well-being of our posterity.

Do you know what that means? It means that 2,739ha of forests vanish from the Earth’s surface every day, or 114ha every hour, or 1.9ha every minute or... approximately one football field every six seconds!

The above data was released by the United Nations Food and Agriculture Organisation (FAO) Global Forest Resources Assessment 2020 (https://doi.org/10.4060/ca9825zh). From what I can gather from the data, the bottom line is this: We need to ponder over this fact seriously, as once the forests are gone, they will be gone forever.

It’s little wonder then that we no longer see traces of animals and birds inside the entrance of the 4,343sq km Taman Negara at Kuala Tahan, Pahang. This is because forests on the opposite bank of the 153km Sungai Tembeling have been logged to make way for oil palm plantation and human settlement. Besides causing global warming, landslides and the depletion of animal habitats, deforestation has also forced the expedited “evolution” of the dying nomadic Batek people, and Orang Asli tribe, numbering just over a thousand within the national park.

In my 40 years of travelling, I have never before been stranded, but I have now experienced that – twice – and in my own hometown! The first was for 107 days from March 18, 2020, when the movement control order was implemented. This was followed by another 403 days, during which many other phases of MCO and lockdowns were imposed; all that came to a total of 510 days!

Even a simple luxury like travelling to a different state (or at one point, district) was inconceivable back then. The worse thing is that we were not only denied our most prized freedom of movement, but also the precious time squandered during those months of complete standstill.

And now, with almost all travel bans lifted, we should more than ever appreciate the freedom of travelling under the clear blue skies and pristine white clouds.

I finally got to pick up my microphone again and embarked on our first expedition after so long! This time, some 28 of us opted to venture into the heart of the million-year-old tropical rainforest, not far from the city of Kuala Lumpur.

We immersed ourselves into Mother Nature strolling along the trails within Taman Negara. We had a close encounter with the forest ecosystem and got our pandemic-weary souls thoroughly cleansed by it. Step by step we rubbed shoulders with 3,000 species of trees, along with 150 species of mammals, 500 species of birds, 67 species of reptiles and 50 species of freshwater fishes.

Inside this virgin forest, we not only managed to find our most natural human selves but also got to explore the most original, unsullied face of our planet Earth.

Unfortunately, what should have been a paradise filled with the natural symphony of birds chirping and insects buzzing was rudely disrupted by the sound of electrical saws and vehicle horns. And the streams that used to be crystal clear are now choked with mud and endless sorrows. Are we prepared to face another ecological catastrophe?

Fortunately as our boats continue cruising further inland, we finally arrived at the heart of the world’s most celebrated rainforest.

The FAO report serves to remind us that the eight billion people of this planet are merely leasing lands on Earth to set up our homes momentarily. Most importantly, we must conform to the tenancy agreement signed between us and the “landlord” up above. If someday this landlord feels so frustrated with His human tenants, and decides to take back the lands, we will be left homeless, for sure.

Who knows, perhaps the coronavirus was a warning for us to do better for the betterment of the Earth?

Ps: While you are reading this article, I, together with 19 travel buddies, are exploring the Mulu National Park in Sarawak, our very well-preserved World Heritage Nature Site. Consider visiting the place one day, before anything happens to it.