Tourists having a meal near the Hagia Sophia Mosque in Istanbul recently. Turkey welcomes tourists, but locals need to stay home. — AFP

Two children run along one of Turkey’s beaches “enjoyed by millions yearly”. Further down it says: “Don’t worry, millions are at home.”

Turks are reacting on social media with a mixture of humour and cynicism to a controversial lockdown rule: until at least this week, people are only allowed out on streets for urgent reasons, such as buying food or visiting a doctor. While some professional groups are exempt, holidaymakers are allowed to move most freely of all.

The result is absurd scenes. A Turkish citizen in the holiday region of Datca was recently fined for going swimming, while Ukrainian tourists were able to do so freely.

Just as with the country’s ban on the sale of alcohol during the lockdown, the regulation is being met with resentment among the Turkish population.

For tourists, however, the exemptions do deliver a welcoming level of safety.

In Istanbul’s old town, for example, foreigners have the square between the famous Hagia Sophia and the Blue Mosque virtually to themselves.

Police officers check who gets in and out. It’s unusually quiet, and instead of the usual deafening traffic noises and shouts from market traders, you can hear actual birds singing. Holidaymakers take photos in front of pale pink blossoming trees.

“I feel like someone special in Istanbul, ” laughs 34-year-old Arif from the Netherlands. He had booked his ticket months in advance and had wanted to cancel it because of the lockdown. Now he is glad he came.

Artem, 28, from Ukraine is downright thrilled. “It’s wonderful, ” he says. He and his girlfriend Karin are in Turkey for the first time and are glad they decided to come during the lockdown.

It just makes it all less busy, he says. “It’s a blessing because we can walk around wherever we want, see all the sights and take pictures, ” he says. But he understands that this does not necessarily go down well with the Turks.

Behind the controversial regulation is an attempt from the government under Turkish President Recep Tayyip Erdogan to get the high number of cases under control and to spare the country’s already struggling economy. As recently as mid-April, the daily number of new infections was more than 60,000 in the country.

Critics accuse Erdogan of having brought the situation on himself, partly because he held party congresses in packed halls. Since then, the number of cases has begun falling again and, according to official figures, was recently below 20,000 per day. Erdogan wants to bring the number down to under 5,000 cases per day.

Tourism is one of the most important sectors of the economy and had plummeted by about 70% last year. The population is already suffering from high inflation of around 17%. Food, in particular, is becoming more and more expensive.

According to a survey conducted by the Metropoll polling institute in April, about 27% of those questioned said they could not cover their basic needs with their income.

Recently, during a visit to Berlin, Germany, the Turkish Foreign Minister made an urgent appeal to Germans to spend their summer holidays in Turkey. Anybody that you might see would be vaccinated by the end of May, Mevlut Cavusoglu promised. The vaccination campaign in Turkey started at a fast pace, but has since become sluggish.

“We sometimes feel like refugees in our own country, ” says Durukan, 23, who sells tickets for city tours on Istanbul’s Galata Bridge. Many people feel that Turkey’s own citizens are not being taken seriously.

He’s on the fence about exemptions for tourists. “If this special regulation did not exist, I would be unemployed, but of course it is not good for our health at all, ” he says.

For 15 countries, for example, the obligation to present a negative PCR test on entry has been lifted.

At the ferry station in Karakoy, a waiter is throwing fish on the grill, even though no one can be seen for miles. He is not bothered by the exemption for tourists.

He supports the lockdown and doesn’t blame Erdogan either. “God bless him.” Support from the state might not be abundant, but the government is taking care of things, he says.

Ticket seller Durukan sees things differently. His family was doing well financially, but for many the help was not enough, he criticises.

In the end, the gap in the lockdown is not between tourists and locals, but, as is so often the case, between those who have money and connections and those who are poor. – dpa 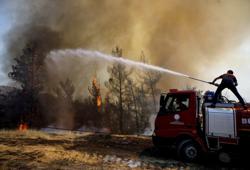